Genuinely out of the reviews thus far, I’m finding this the most positive.

Indeed the player is given a weapon during the combat phase, and assuming you took the PDA option in the first choice you’re given, you where given the rifle? But if you chose the newspaper route you’re given a small ditty little handgun, It’s out of necessity really, and more of a ‘‘you found yourself in the wrong place at the wrong time.’’ Suuuuree you can turn it on them, get a few good shots in, but ultimately… you’re dead… WHICH ALSO, Thanks to you, has given me an idea to update with… I’l message you something special when i’ve finished it!

Indeed that was meant to be Astra however I’m finding myself writing at stupid o’clock at night sometimes with these rewrites so I can get a little tired.

That agility thing? It most certainly shouldn’t be there. Looking at the script itself it’s because i’ve *set agility 5 rather then Set Agility + 5, I’l have all the issues you’ve pointed out fixed within 5 minutes.

Thanks for all the comments, all issues HAVE been fixed I’ve released a third of the military chapter 1 side of things but unwilling to take any comments on it AS OF YET as it is:
First draft
Written up in 3 hours,
Not tested myself

BUT I’ve posted it AND i’ve posted some Pre-filled Encyclopedia pages in the “Armoury” Section, more specificly:
Armor and Weaponry pages

thanks to a comment from LadyUmbreon89 i’ve added a fun little choice, to find this choice simply follow the talking branch of things without being loyal to the Empire. you’ll be given an insight to the bravado of military thinking, remember; at this point you’re only a conscript with no formal weapons training.

edit:
I’ve added a bit more for the night onto the Military chapter, this is a major insight to what the player can expect to see in this book alone.

I think something went wrong, no rush tho, good luck and goodnight. 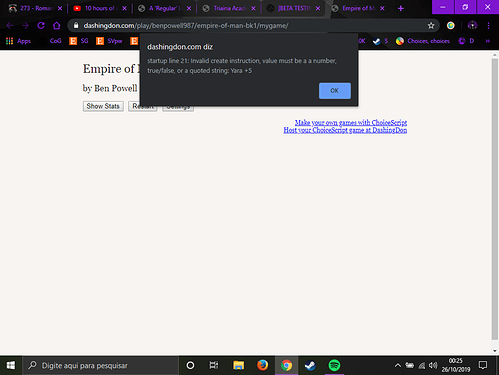 I wasn’t able to find the new info after reading over it three times. I could be doing something incorrectly, but there’s a chance that part of the update wasn’t applied. Unless you meant the parts after you select your gender, and name. If that’s the case, then it works fine! I delayed clicking forward because there’s no ‘Play Again’ page that prevents the unlimited loading loop when the game has nowhere to go, but to reset. Not all wip’s have one, so nothing amiss there.

This game make to have a feeling i am playing a mixed thing of Star Wars and Warhammer.

I am majorly unhappy with the prologue, I feel I can do better and indeed I will do better, My main problem areas are as followed:

So i’ll be rewriting this entire chapter not only because i’m unhappy with it, but because i’d love to give the rebels more story, more reason, and not just 'These guys spoke to me badly, hurh im gonna punch 'em."

I plan to make changes towards the military story also, adding more context and world building.

The book will -100!%- have the same planned story, the same feel, atmosphere and really? Nothing much is going to change, this is me; Okay I feel comfortable with the text now, i’m going to rewrite it.

As of now, beta is closed until I sort out chapter 1

Good luck with the clean up/sorting out. You’ve really got something here, so I hope to provide decent feedback, and bug reporting when you feel your story is back on track.

One thing that can help the feedback better cater to your needs is cluing the readers in on the rules you would like to adhere to. Well, rules and goals.

I’m rewriting the entire thing, what you see was 2 weeks worth of work, I expect probably you’ll see a much better, well worded, much more easier to follow story, with the player able to interact, and see the very causes of the rebel versus military side of things. It’ll also come with a new name, ‘Dawn of War.’ you will see either the rebels preparing to strike, or the exact moment the fight begins on the military side,

When I started this, I knew that it wasn’t going to be a quick “Six months and i’m done thing.” Early estimates where at 2 years due to no writing experiance, no formal background, Ect.

Since essentially it is 2 different books in one, I want to give both of these stories a proper start,

and I am actually happy to say i’ve implimenting a difficulty setting, which is actually natural to the story rather then a simple menu saying easy, normal, hard.

For those with a continued interest in the EoM book, I’ve just completed part one out of three of the prologue,

Currently, the player is able to view their environment a bit more.
See the starting foundations of the era of war to come around planet Astra (now named Astra Prime)
Chose their difficulty, Gender and what system of measurements they prefer (out of metric and imperial.)
They’re able to meet a few rebels and some of the soldiers involved in the battle scenes in this one chapter,

Currently working on:
The military side of the prologue.

Once I’m done with that i’l start on the rebels’ side.

“Nobody in this universe gives a damn about you, or anyone else. You survive only because you make it so. war comes naturally to the human race as eating, or breathing, Pirates, Mercenaries, Slavers, Raiders and Rebels, Even the very empire that is meant to protect you is rotten to the core. You are nobody, and soon? the lives of billions, and the fate of the entire universe will rely on you. This is your story.”

"As you look outside, you take a moment to look around, as far as the eye can see is tower-blocks cascading towards the sky, bridges forming between buildings at varius stages of the city level, All prefabbed concrete buildings, bright neon signs cutting through the dark polluted smog. You’re lucky enough to live within one of the middle-tiers of the city, the more you decend the darker it gets. Indeed Lianport was just like any other megacity within the universe, but it is uniquely the only one on Astra Prime.

“Look, over there!” she points out towards one of the many bridges, upon it thousands of men and women, marching in tightly packed squadrens, all wearing heavy combat armor and carrying their weapons proudly. “Look! A seigebreaker!” Christine now pointing towards a singular humanoid-like robot, standing @{u 40 feet|12 meters} Tall, carrying it’s own weapon; a large rifle twice as tall as any man you’ve ever met.

“They’ve even brought tanks!” her finger now pointing towards an column of combat vehicles, much of them armored personel carriers but every third in the line is a fully equipped with P-R0 Vixen launchers, Storm Breaker flak machine guns, and armoured to the nines with thick ceramic plating. “By the light, they must be here for something.”

and these are just quotes from the first 5 minutes!

This will be my last post on -This- thread, As the title of the new book is; Empire of Man; Dawn of War.
i’l be making a new thread when the prologue and chapter 1 is done. ETA? Couple of months tops?