After a (very) long hiatus I return, bearing gifts! The prologue for Amygdala is now complete, and has undergone a rewrite. I’ve also made MANY changes to the world state, and as a result the characters have along with their environment. So, I hope that everyone who was kind enough to give the first demo a try will give this new one a try as well

The prologue is at about 35k words, not including code. There is a complete character creator and the next update will probably be chapter one, or part of it, depending on its size. There is also a skip option that JUST includes stat picker and character creator, for later updates to streamline testing. It is usable, but not relevant at this time

I’m looking for: Any odd transitions or spots that lack good flow, especially, but all feedback is welcome.

There’s also a Discord server for the game now: https://discord.gg/dy6wq3X 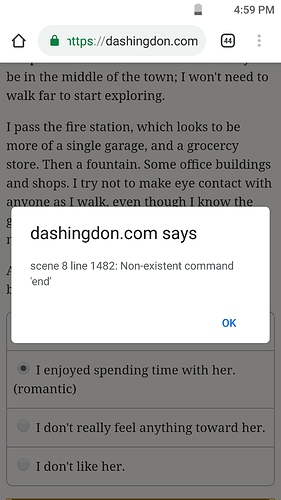 Oops, sorry about that… it should be updated now! Thanks for catching (and giving it a try!)

This is a very cool idea, and your writing style is pretty impeccable!

Spotted a few typos but forgot to take screenshots: “interpretted” should be “interpreted” when the group is explaining how the Wave signal was interpreted wrongly during the Blackout, and there’s a capitalization error on the page where the others are saying Greer is a night owl who you won’t see much of before noon.

When messaging Amy on the computer, I’m not sure if this typo is intentional or not: Amy: ‘If you need to get in touch with us this shoudl work until you have a phone.’

Excited to see where this goes: the mystery of MC is very intriguing, and I’m curious if there are actual ‘zombies’ in the game! For maximum outreach you might want to consider putting info about the ROs in your main post, since I know that’s what lots of readers look for, lol! (Thought I’d be into Tad but Darwin and Greer got me like

) Good luck on this!

Any typos in the messages/chatroom are intended! Just in real life

Aaaand I’m hooked.
Best of luck with the wip.

Story is really nice but most of the chapters seems too short. Keep up the good work.

I got this error when I decide to go with Amy and Greer. These are the sequence of choices I made: 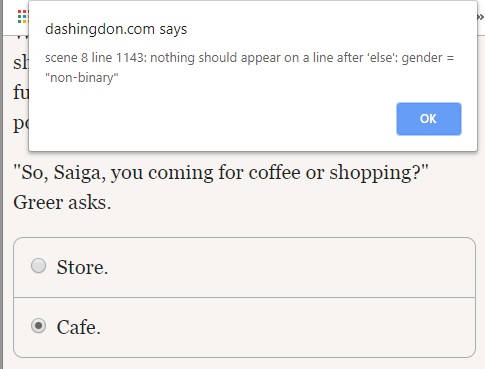 Just how many chapters are you planning on writing if 8 of them correspond to 40k written words?
This kind of gives me the impression they are all short. Either that or the story is going to be on the smaller side. 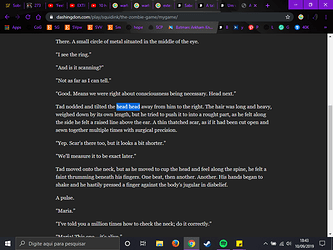 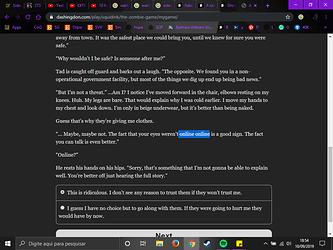 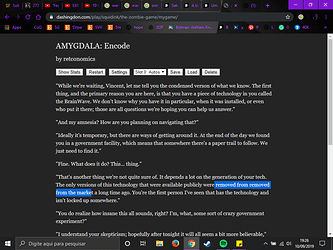 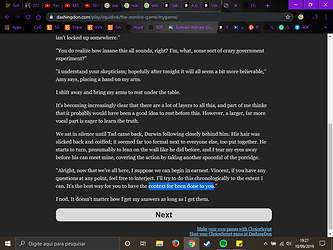 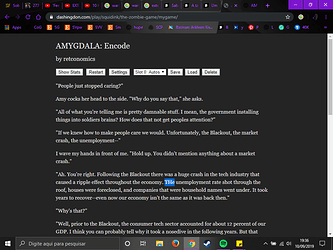 I’m loving the demooooooooo. Comissar already put up the typos I was going to report :>

Darwin is my best boi so far despite picking Greer first and I’m really looking forward for more.

Also, if possible, can you please add indifferent or quiet choices? ^^

Thanks for the comments everyone! @Vashnik thanks for finding; the error should now be fixed. @IvoryOwl it’s actually going to be much longer (don’t have an exact estimate since i add minor scenes as I come up with them). This “demo” is purely exposition, but you’re right the chapters are short–As per your and Dwayne’s suggestions I’ll be condensing them in later updates!

aww man i thought we were a homunculus

I’m bad finding typos or code mistakes, so I just want to say that your story is amazing so far, I already love the characters and the way you write. Definitely intrigued to know how this is going to end.

I like this WIP! It’s definitely far from what I typically enjoy, but I was immersed in it pretty easily. I second the questions about the chapter length: will this story be on the shorter side, or instead of having them sectioned off in chapters, should you use page breaks instead?

I’m gonna start by saying, love the demo, love the characters. I have a bit to say regarding flow, mood and the contents. Don’t take what I say that seriously though, it’s just an opinion; one from someone that sometimes don’t know what they are talking about. Honestly, don’t even know if what I say here is something you want to hear. if it’s not, feel free to ignore it.

Will put it below and in a orderly manner (I hope) to avoid any kind of spoilers for those who have not read it yet.

thank you so much for all this feedback–very helpful and gives me a lot of ideas for things to revise/add in. I’ll likely be referencing your suggestions many times in the coming weeks!

As a note, Arabs are not the only Middle Easterners. There are many ethnicities in the Middle East, and some people would definitely bristle at being called Arabs. I’m speaking as an Arab myself. If the goal with including ethnicity/race in the character creator is inclusivity, changing “Arabic” to “Middle Eastern” is probably a better way to go about it.

Looking forward to where you’ll take this story!

That was different. In many ways. All of them good.

I wonder who this Cain is?