There is a secret in your family history that you can choose to embrace or just remain human but the choice is ultimately yours.

Well, they are really open minded beings and they have packs, coven, and etc. They are very protective of their groups and they have leaders for each group. They have treaties with other beings like the werewolves and vampires coexist with each other but that’s just about it. Some of them do mix with other befriend other beings but you’ll mostly see them butting heads and talking about who’s the better being.

I hope that helps.

Looks like I’m finally going to get the older ROs I’ve always wanted.

Seriously though, an interesting cast of characters. Will it be possible for bi MCs to simultaneously have female and male ROs in-game? Or is it one choice that decides the gender of all the ROs?

I want to make it so that the main character can be bi, but I’m still trying to figure out the coding but don’t fear once I do it will be added.

Good news!!! Took some doing, but I did it I found the right codes to have males and females at the same time for our bisexuals. WooHoo!!!

Awesome! Thanks to answering

Closest to answering my question without potential spoilers I guess. Thanks.

I would appreciate it if you guys informed me if you notice some grammar error or etc. and I hope you enjoy the demo!!! 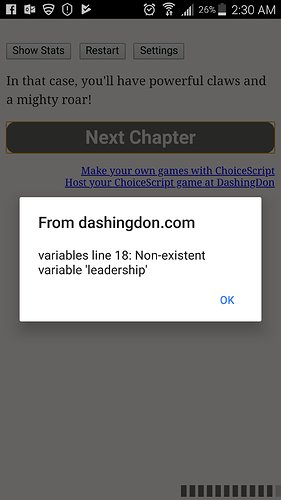 No, you just went past the demo. It ends when the next button says “Next Chapter.” This demo only holds the Prologue. It may be short but the Prologue has different outcomes that gives a descriptions to the main characters so good luck getting them.

There’s an error when choosing “I’m the district attorney”

Thanks for the notice. It’s been fixed it.

The new and last character to Agency Of Otherworldly Protection is Catos Kane a necromancer and is the villain to your story.

Will it be possible to be a good necromancer? Or would that not really be recommended?

All I can say is they are someone that believes in what they do, and nothing else matters.

Things are coming along well. Woohoo. Hope you guys are enjoying the demo.

I saw some errors in the new demo :

One little thing : it was strange to pass from the choice of your animal to stop at the book. Plus, it was fun to hear the doctor say you didn’t take any drugs. (So what the hell is wrong with you ?) I totally heard the second phrase

But in both cases I enjoyed the demo ~.