With a new demo!

Its been a long while guys, and if you haven’t noticed, the demo I had on here previously is unfortunately dead as a doornail. The last laptop I had is busted, and I lost all the progress on it. But, I may be able to extract the files manually from it. All I need are a few screws and I’ll be good. But the demo still dead regardless, so back to the reason why I’ve written this post!

I have a new story that I have written. I actually started it in May, but yesterday I picked it back up and continued to write. Right now the word count is 10,100 words with command lines.

A FEW WARNINGS
There will be cursing in this, probably a bit of blood too sooooo…yeah. At least there’s magic to make up for it though!

Error when I pick what is it. 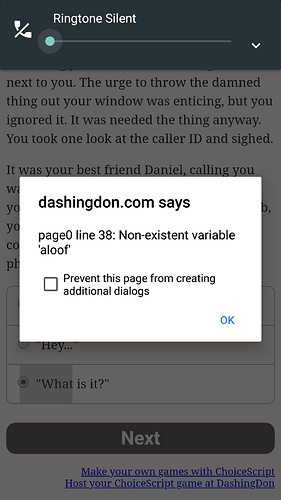 You can’t input your name: 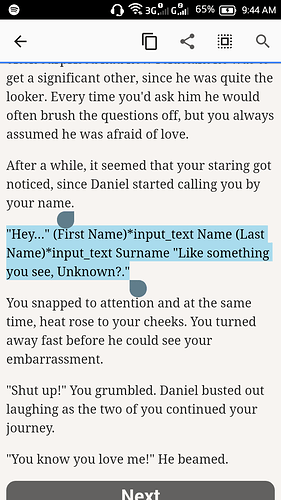 Also, there’s no bi option without being attracted to Daniel, which is kind of weird.

Sorry! i’ll do that!

it should be fine now

Um…I’m able to input my name when I type.

I’m not sure what’s wrong with yours

It’s after I pick the option to be bi and attracted to Daniel. It doesn’t show up in the other routes, though.

Are there ROs and if so how is that gonna work if we’re a giant?

There will be RO’s

Magic is the solution for everything my friend, do not worry!

Also why did our race suddenly change froma human to a giant?

That’s a secret my friend. All in due time…

My first thought on this is that the extended multi-page falling sequence felt kind of weak.

And a bug. When I walk out confidently,

a1 line 37: increasing indent not allowed, expected 8 was 9

My first thought on this is that the extended multi-page falling sequence felt kind of weak.

Really? What should I do to make it have more impact? Pun not intended

I’d suggest that you shorten it to two pages worth of falling. Beyond that, you’ve made your point and there’s no tension.

Thanks. That error should be fixed. I’ll probably do that suggestion in the next update

Ooo I wonder if other creatures like orcs and goblins will be in this story.

This is certainly an interesting start, and I’d like to see where it goes.

I do have a few issues with it, though: my character is forced to be very anti-outdoors, and is only going along on the trip because of Daniel. Can’t I actually want to go on the trip for myself?

Secondly, the “foreshadowing” that I was too large felt a bit weird: the monster was “as large as a bus” but “only came up to my shoulder”… If I don’t know I’m tall yet, surely I’d think it was “the size of a small horse” or similar? Also, the trees being too short was weird; even as an outdoorsy person, I probably wouldn’t notice that, but my stay-at-home MC seems very well-versed on tree sizes.

I also noticed a few smaller issues: for example, my eye colour is “peculiar”, but the only colours to choose from are all perfectly normal… (And then it says that my eye colour is a personality trait…

) Also, when I’m trying to check if I’ve broken any bones, the game suggests that I think my legs may be broken even after I’ve checked them, and when I’ve tested everything, I have to refuse to move in order to progess, despite the fact that I’ve already shown that I’m not (badly) hurt.

Finally, I think I’ve noticed a few coding issues: first, it looks like you’re using the mygame save. This means that it will overlap with any other game which uses that, so you should probably change it to something like: *sm_init giantstale | 3 Also, it looks like you change scenes a lot; this isn’t recommended, and it would probably be easier for you to stick to single chapters or large scenes for each scene file.

As I said, it’s a good concept, and I’d like to see where you go with it.

Good luck with your game!