7th Sea: A Pirate’s Pact — Command the high seas as an up-and-coming pirate! 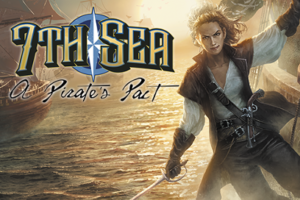 We’re proud to announce that 7th Sea: A Pirate’s Pact, the latest in our popular “Choice of Games” line of multiple-choice interactive-fiction games, is now available for Steam, Android, and on iOS in the Choice of Games Omnibus app. It’s 33% off until December 21th!

Fight for what’s right—as an up and coming pirate! Battle slavers, sea monsters, and your own corrupt government to become a hero of the high seas. But will you betray your own crew for wealth and power?

7th Sea: A Pirate’s Pact is a 200,000-word interactive adventure novel by Danielle Lauzon, set in the world of the table-top role playing game 7th Sea. It’s entirely text-based, without graphics or sound effects, and fueled by the vast, unstoppable power of your imagination.

Looking for adventure at sea? You’ll get more than you bargained for when you end up joining a pirate crew. These pirates are known among sailors for having their own moral code, one that is now yours. You’ll have the chance to rescue prisoners, uncover a secret plot, and even build a navy to liberate an island fort full of slaves.

But you’ll also be tempted to break your pirate bonds to seek your own gain. Would you still free the slaves if you could take out your own rivals instead? How far will you go to save your friends? And when you uncover corruption in your homeland, will you choose villainy or vengeance?

Earn your crew’s loyalty and they might make you their captain, but get careless and you might have to walk the plank!

• Play as male, female, or non-binary; gay, straight, bi, asexual, or poly.
• Choose from three different nations as your homeland, with distinct stories for each.
• Romance other pirate captains, or compete with them as your rivals.
• Fight for good, or work for evil.
• Lead a rescue, uncover a secret plot, and defeat tyranny.
• Visit various island nations to win them to your side and build a navy.

If it’s the pirate’s life for you, what will you sacrifice for freedom?

We hope you enjoy playing 7th Sea: A Pirate’s Pact. We encourage you to tell your friends about it, and recommend the game on Facebook, Twitter, Tumblr, and other sites. Don’t forget: our initial download rate determines our ranking on the App Store. The more times you download in the first week, the better our games will rank.

Ah, I’m so excited that it’s finally released! Best birthday present I can ask for!

Thank you as well! @Solarepsilon

This sounds really fun! I’m a sucker for a good pirate adventure.

Arr! Shiver me timbers! Me be buying and enjoying this booty by the seas!

I loved it! But I wanted to romance the king’s twin

So is it possible to romance Christine?

Nope, I think not

I didn’t know that the “childhood friend RO” option had that kind of effect on people.
I guess I learned something today.

Use the support email found in the app. There’s a contact us in the menu.

After having played Death Collector this one seemed overly simple too me. But after a while I enjoyed the setting and how the choices where so obvious about which stat they are linked to. The only complaint I would have about this is that the romances (or at least the romance with Redwing) happened too early in the game. I didn’t feel like I did get to know her when the choice was offered about the romance with her. Like what? The ship you are traveling on gets attacked by pirates and just a few days later you are already head over heels for the pirate captain? Kinda weird imo.

Christine is literally the best RO of all… the only real question is WHY CAN’T WE BE TOGETHER?

I wish the author spent more time improving the romance . AND IM NOT HAPPY ABOUT CHRISTINE UNROMANCEBLE… and i hate reuben i wish i can delete him from the game lol.

She isn’t? Oh. I wish someone could’ve told me sooner. My god, but then why all this backstory and this stupid triangle with Reuben?.. I tried to kill that guy the whole damn game.