This game seems to be very good, but I really want the Lord of Aswick sequel :’(

Oh you mean that other thing I have open right now that begins with:

It was a clear and cold midwinter day. One of those days where the sky was clear and one could see their own breath billow from their nose and mouth and then follow the plume up to great heights. The air was mostly still and as people walked around, they could feel the crisp crunching of frozen snow beneath their feet.

Shawsmouth Palace stood strong in the middle of a frozen river estuary, its magnificent and artistic gothic towers rising high up into the air and dominating the scenery from Thurstowe, which had grown to become a mighty Royal City in its own right since the new palace had been constructed some century prior.

I don’t think anyone will want to read that trash… 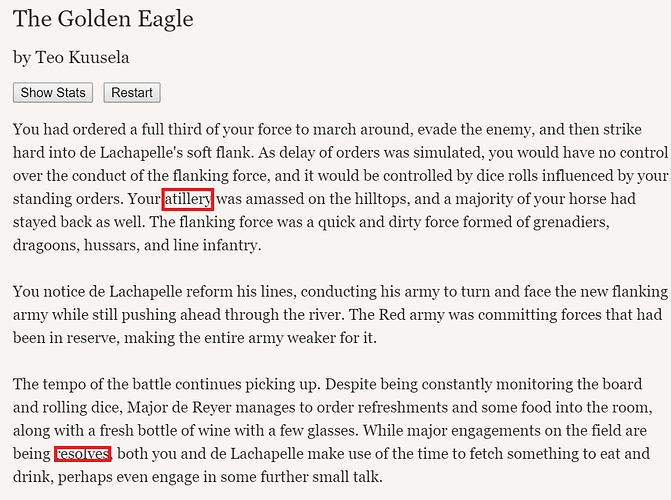 I believe these are supposed to be artillery and resolved

Do not end up working on the story for five years and make it over 1 million words even if it could easily be.

I fear you already have an epic saga already in the making,

I’m a no one then

Hah, at least I’m not completely off in the way I present the French phrases. This is good, because that means I’ve done my research well, because I don’t speak a single word of French.I debated for a while on using English terms in the text and leaving the French terms in the spoken or written (in-story book or letter) segments, but I felt that caused far too much confusion. Especially this early on.

If you need occasional advice on French I can lend my help to you if you desire it.[quote=“Goshman, post:20, topic:16176”]
I’m very aware that the beginning of the story does resemble Sabres, and I tried consciously to steer away from certain elements of barracks life that were presented well in Sabres. Unlike the Infinity series, I aim to be done with the warfare aspect as soon as possible so as to carve a very different path for the rest of the story, and that will be where the real differences become apparent.
[/quote]
Good. While I’m all for crafting ingenious military strategies to beat back the enemy with, I feel that’s for another time.
I’m assuming this “very different path” you speak of is going to be a look at France during the early days of the Revolution as well as the Reign of Terror?

The parallel to the French Revolution is apparent in almost everything I think, except the Emperor’s status. The Empire is a strange mesh. French Republicanism and Belle Époque culture, as well as enlightenment ideals, all injected into a nation where the Imperial institution (and the Emperor itself) are considered much more like the Chinese Celestial Emperors, which also brings about some nice Forbidden City intrigues stuffed into a very fancy Versailles.

I was thinking more of a bad/forgettable Roman emperor archetype, but this sounds more interesting, methinks. After all, the status of Chinese Emperors can very well be comparable to the reign of Louis XIV, the “Sun King”, due to their “divinity”.

I have three general goals in mind for the story, and I think laying them out will help in figuring out what my answer is:- Show the brutality of an industrialized warfare fought with obsolete tactics and strategies.- Explore the changes in culture, economics, and politics, as the world shrinks down thanks to industrialization.- Do not end up working on the story for five years and make it over 1 million words even if it could easily be.

I love this but I found a lacking of ambitious choices, my girl just want to use army to acquire fame and plunder to become a powerful politician. Your options are really or peace of warrior hunger ones . The academy battle is amazingly done and easy to understand. My character goes to cunning flank choices give her the victory in all cases.

You’re freshly graduated out of a military academy and just barely able to participate in their first battle, it seems a bit early to become a powerful politician with that kind of resume.

Yeah, but they ask What do you want in the party. I want be a politician, not a peace family woman or a eternal soldier.

Ueah, but they asking What do you want in the party. I want be a politician not a peace family woman ora eternal soldier

Hmm. You have a point, though I would think that would come with enjoying the glory and spoils of war. Eh, @Goshman can always sate your inner warlord later.

To put the timeframe of technology and culture into a real-world frame, I would say the story takes place in a time between the Franco-Prussian War and the First World War. While the French Revolution hangs in the air to some extent, it isn’t a main focus. Nor will I explore the Reign of Terror outright, but elements of that might be used if certain choices are made along the way.
I won’t reveal anything else behind the curtain just yet about what I have planned in the storyarc. Let us say that it isn’t necessarily focused entirely on just the Empire’s politics.

Also, Zulu is an amazing movie, if you have not seen it before. Some of the scenes from it are almost on loop for me to get the proper feel to the era.

@poison_mara You always manage to surprise me with just how ruthlessly ambitious you want to be as the MC. I’ll see what I can do. Keep the feedback up whenever I slip.

Ruthless but accurate… Ask Napoleon about rise in politics through army. Also I love how you based your calendar in the First French Republic system so terrible, but cool in your setting. My character is noble and is not cool with commoners as equals… They could run if she ended in power…

I’m just bummed that we became a fusilier, I would have killed to have been a Cuirassier or Lancer for once. I love the Royal Dragoons, but man, their uniform game is weak.

A prestigious posting in a prestigious cavalry formation is everyone’s dream, especially if the uniforms are awesome.
I hope you understand where my hesitation lies in producing a story with black powder fuelled war, with an academy in the beginning followed by a posting in war, while also being a cornet… and a lot of the fellow officers have a “de” in their names.

Finally finished my first run through the game and I must say, I really enjoyed it

. While it does have a number of similarities to Cataphrak’s Infinity series, it’s also different enough to feel like it’s own game.

As much as I like being a cavalry officer in Infinity, I feel like being an infantry officer is a great choice for the setting you chose. The mid-to-late-1800s led to numerous improvements on firearms, making them more effective as infantry weapons and making horses and cavalry a lot easier to stop than before (they make nice big targets). I feel like this is the time period when warfare started to shift to the more skirmish-oriented ways of modern warfare (as opposed to the firing lines of early modern wars). I can’t wait to see how I can use the MC’S peloton in game. Well done!

You always manage to surprise me with just how ruthlessly ambitious you want to be as the MC. I’ll see what I can do. Keep the feedback up whenever I slip.

I’m not one to agree with Mara, but all the options are either “I want to be a soldier”, “I’m happy to be here” or “I want to have a family”.
There is no ambitious option, there is no way to be unhappy to be sent to a war, etc…

Edit: about the regiments, I would like to be a engineer. No games let you play as one.

Believe me, I understand perfectly. I was just musing. Part of being a member of the Guard Regiments is understanding that the rankers and NCOs are the best in the army and the officers, a bunch of entitled brats, who will charge into fully formed squares for glory and all that. Being a Fusileer enables one to have a chance to elevate themselves and imagine the practical use of some of the things you’ll want to implement.

I’m not one to agree with Mara

No one likes her.

I am not knowledgeable about army stuff, but Dunno what it is better place. My character choose experimental group like desired. I really think a choice to select if you like your destination could be a good custom choice. It’s f
good destination overall? Infantry looks so commoner blunt force… And my girl is worst soldier ever , like she can’t shoot straight lol.