I promise I’ll write a better description tomorrow, but for right now I’ve just got to post this before I lose my nerve.

Witches have been enemies to the Sages of the Dawn for thousands of years. As the oldest child, and heir of the most powerful sage in the new world you always thought you knew which side was right. When an act of violence and spell gone wrong rip you out of that world you learn that neither side has sole claim on what’s right.

This will be, hopefully, be a dark, character driven story set in a “low-fantasy” world. There is magic, but no elves, dwarves or dragons. So I think that counts as “low-fantasy.” The game is set in the capital city of the first colony on a vast new, unexplored continent.

If this is successful it’ll be the first of a trilogy where some of your choices will carry over and impact the later books. If not it will be able to stand on it’s own.

It’s still very rough, and the demo is only 6,000 words. I’ll be editing and adding every chance I get.

I really appreciate any and all feedback. I’ve never written anything this big before. 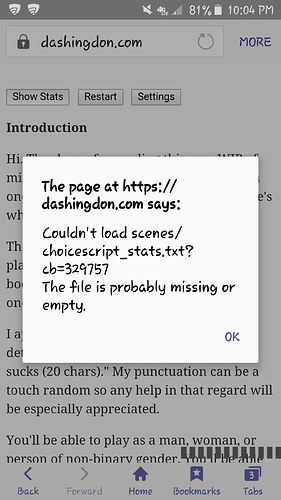 I also got an error but I cant screenshot it , sorry…

was trying to enter mah name .

Edit: Apparently picking one of the name on the list work…but not custom name .

Wonderful job - you have a very engaging style of writing with strong verb choice and imagery! (You also use the *page_breaks very effectively! It’s very immersive.)

I would just like to clarify, because you seem a bit unsure, that this story counts as “high fantasy” because it’s set in a secondary world of your own creation. “Low fantasy” is set in the “real world” with magical elements, like Harry Potter or Twilight. “High fantasy is defined as fantasy set in an alternative, fictional (“secondary”) world, rather than “the real”, or “primary” world. The secondary world is usually internally consistent, but its rules differ from those of the primary world. By contrast, low fantasy is characterized by being set in the primary, or “real” world, or a rational and familiar fictional world, with the inclusion of magical elements.” Source 1, 2 for anyone wondering!

If it’s okay, I’d just like to point out some small typos I noticed in the beginning:

I also haven’t been able to access the stats (not sure if you’ve made them yet) and while the opening was definitely intriguing, the reader’s sense of disorientation does make it hard to feel the fear or emotion the protagonist is supposed to be feeling. The part where the warlock comes into the dungeon feels a little exposition-y, as well: maybe dole out more of that information before he shows up?

Other than that, nice work!

so I have nooooo idea where you are going with the story but I want MOAR!!! MOAR!!!

Good luck with the story!

First off, I’m loving the setting and concept. Reminded me of my elder scrolls playthrough. The whole starting out as a prisoner part. The only issue I seen is with Charlie. For some reason his pronouns would switch between him/he/etc to her or herself. There was also an error for typing in my own name.

Whoa, starting right in the action! I have to bookmark this thread

By the way, there’s supposed to be a page break here I believe 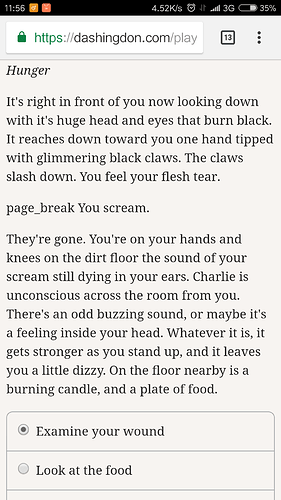 Oh god thank you all for reading and commenting. So many bugs to fix.

@E_RedMark I found that bug and fixed it. Thank you very much.

@Cheion Yes. You’re right. and now there is!

@Robert_Snead That’s because Charlie/Millie’s gender flips based on yours for…reasons, and I’m really bad at remembering to put the little ${} things. Thank you for letting me know I missed some, and I’ll get back to hunting them.

@rinari Yes there will be stats, but I’m really struggling with how to implement them. I want them to affect how people react to you more than just what you’re capable of. So the stats will tend more toward how kind, or selfish you are rather than how strong or smart you are. But until I get into those scenes where the stats start to have an effect I didn’t want to set up the stat page.

And thanks again all. I’m seriously vibrating with anxiety and excitement over here.

I’m seriously vibrating with anxiety and excitement over here.

and you shouuuuuld!!! ITS A NEW WIP FOR US TO REAAAAAAAAD!!! how do you think we feel ? well I know I’m spazzing !

And thanks again all. I’m seriously vibrating with anxiety and excitement over here.

The most exciting part of the process is exposing your work to the world for the first time!

Keep chasing that feeling and good luck with this project!

Congratulations on your demo and good luck, I’m really looking forward to how the story plays out!

I’m seriously vibrating with anxiety and excitement over here.

And I’m vibrating with excitement in anticipation for your next update!

Other than the pronouns others have identified, rhere’s a missing close quotation marks at the end here 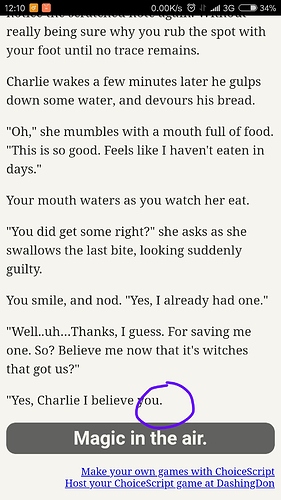 Congratulations on the wip!

You’ve mentioned that there will be more character related choices in the future so I’m not worried.

What I’d like to ask is, must we be kind and helpful towards the prison girl? Could we act more stoic,rude, or rough in the future? And could that perhaps reflect in our dialogue(or have us choose our type of response)?

It can get a bit complicted with all that but I would definitely feel more immersed with choices like those. 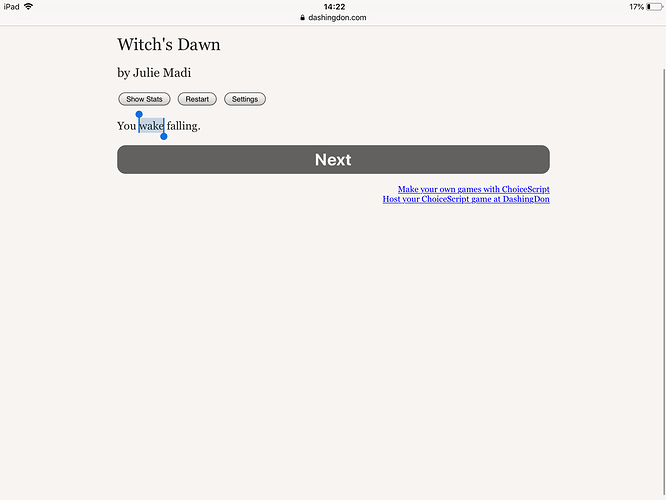 I would suggest adding ‘up’ in that sentence, just to make more sense. 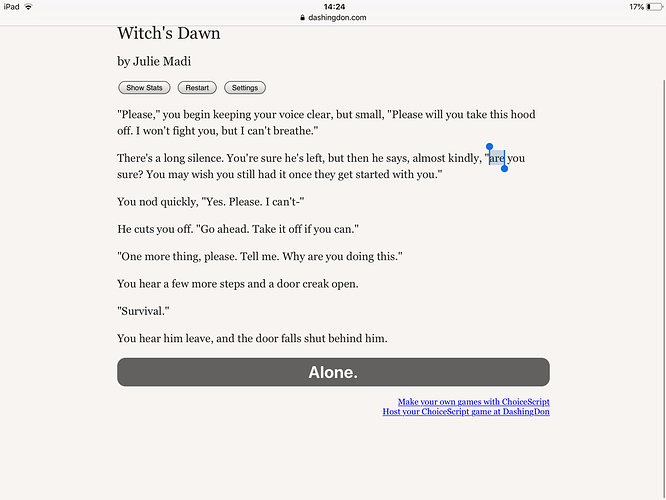 Simply make the a capital 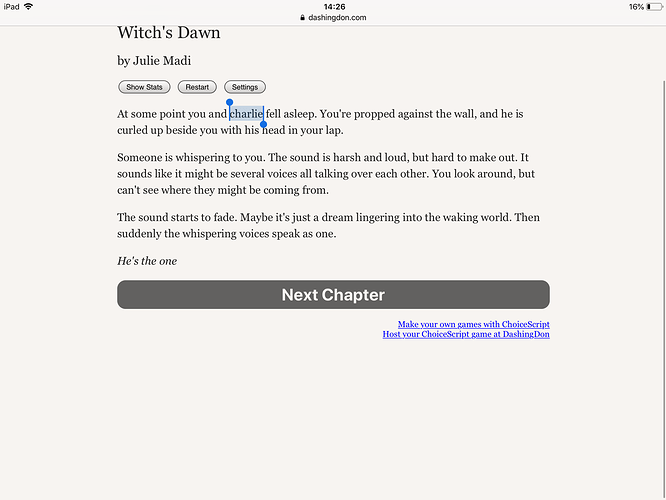 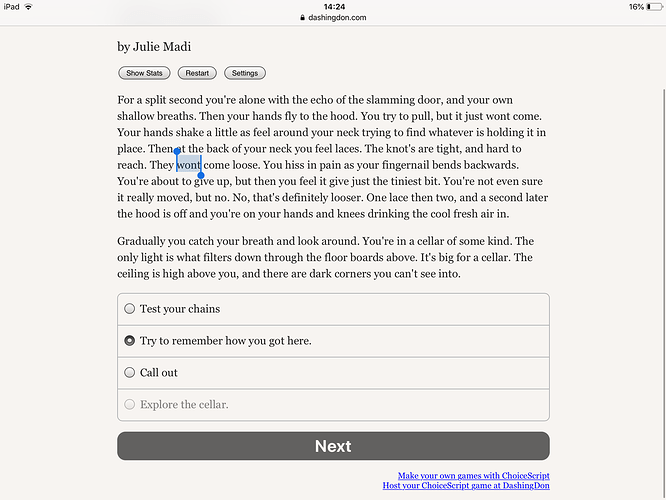 Just add the apostrophe (‘) in won’t 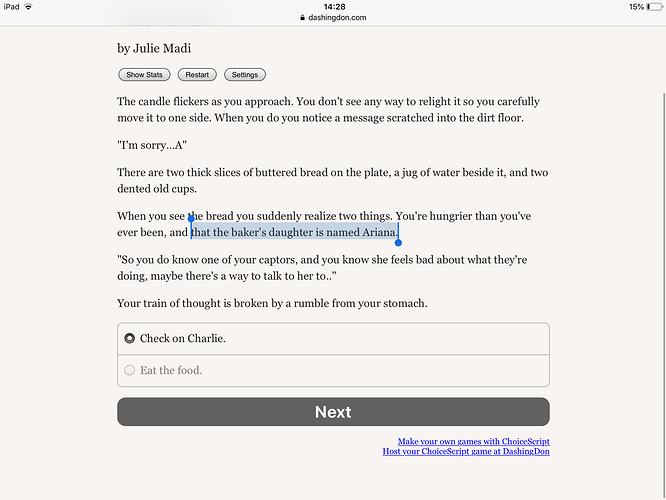 In my opinion, I would change the sentence to ‘you recall the baker’s daughter name, Ariana.’ as you are familiar with the person whereas that sentence would suggest you’ve interacted with them for the first time. 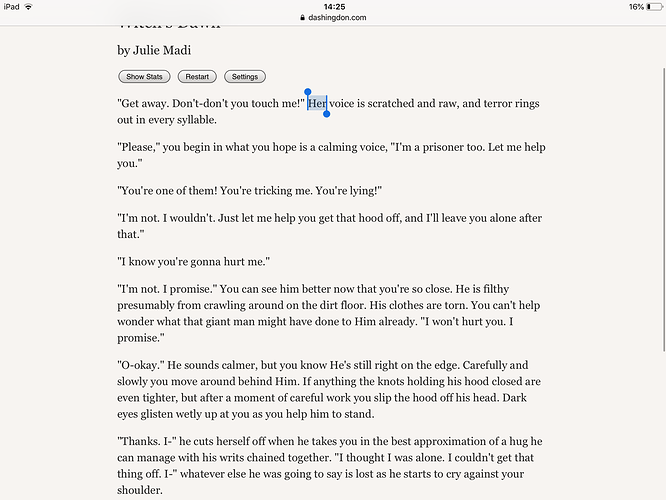 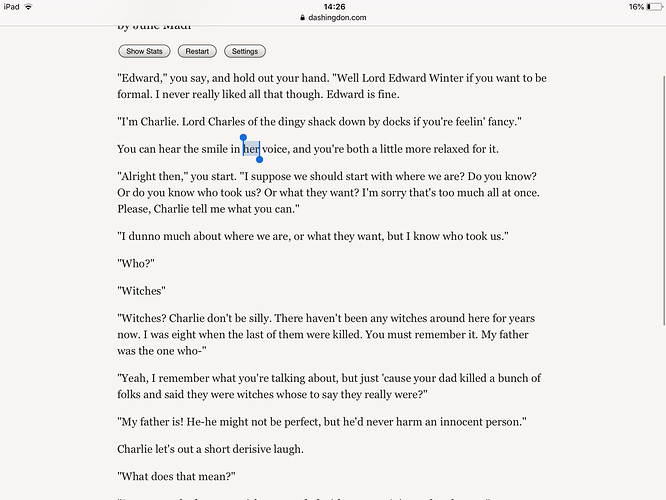 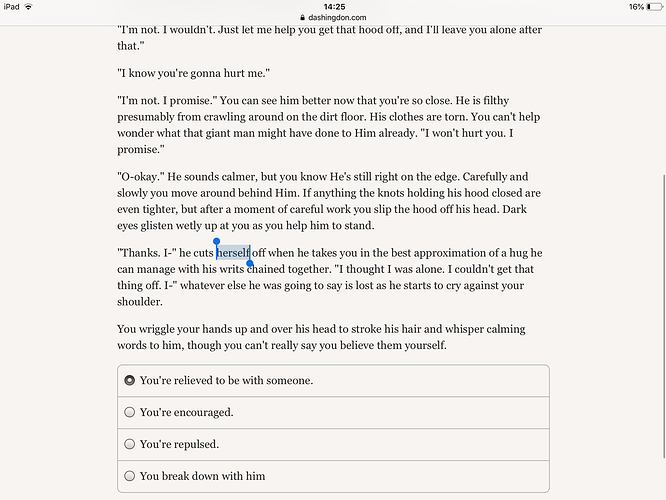 The last three are simply changing the pronouns to male, since you earlier established Charlie as a boy.

All in all, hope you can continue with this.

I just got this bug after entering my name.

Wow, nice story you got here ! I’m also writing about magic and romance as well , so it definitely worth to learn about other ideas. Keep up the good work

Bright and early and back to work.

Thanks @Cheion and @MIGSey for pointing out those typos especially the pronoun swapping ones. They’re so hard to find.

@Terriermon50 Thanks. I fixed that bug once. Didn’t notice I’d made the same mistake twice. I’ve got it now. Probably.

@BoisterousBumblebee Yes. I agree that right now the interactions you have with Millie/Charlie are a little generic. I am going to work on making the choices about how you respond to her/him a little bit more varied, and have a little more impact.

On that topic I think because I used the word girl/boy and I made the other prisoner a little bit smaller, and kinda helpless compared to the pc that they’re coming across as a child. They’re supposed to be a nearly adult teen, like the main character. So I might go back and try to fix that too.

Not right now though. I’ve got all damn day free. I’m going to forge ahead with the next part of the story.

Sorry to bother you or if this is a spoiler but I noticed that you used “Assigned male at birth” and “Assigned female at birth”. Does this mean that we will be able to play a trans character who comes out/changes presentation during the game’s story?