Highlights for me include:

(Now let me replay to properly sink my teeth – yes, I see the pun – into the thing for more conducive feedback)

Just finished my first round - LT N route - of the final demo. Oh god… lol And even though I’m going to bed at practically 5:00 AM, I am getting up no later than 10:30 AM to read through at least a few more routes!

Also just became a patron on @Seraphinite’s Patreon… And even though I’ve got some pretty sweet privileges - yes, privileges - I wish I had enough money to get the top tier.

Oh well, guess I’ll have to make due.

haha (Yes, I know. I have very weird mood swings.

Wow Sera, people have been asking about the MC’s father and Bobby meeting UB since forever and here you go delivering on both

Well, kind of, in the latter’s case. It was so close! You like to tease us, don’t you?

All in all it’s genius work as always, Sera!

One, why didn’t UB know about the illness but Rebecca appearantly did? It’s been happening for a few days at that point and they’ve been treating the victims too, so wouldn’t it make sense to keep UB informed of such things happening in Wayhaven?

Secondly, I kinda feel like M’s (haven’t tested with the others yet) friendship stat checks are a bit high? Like we were pretty good friends in Book 1 (as evident by them not letting that branch smack into my face

), so I of course chose M as my best friend in the demo.

But I also didn’t pick any choices that further increased the relationship (since they were a bit OOC for my MC). Despite this it seems a bit weird to have chosen M as my best friend yet this alone doesn’t pass the checks and they’re not interested in the MC at all.

That being said, this could very well change once we’re able to import our character in the full release, but I thought I may as well put it out there.

Thank you so much <3

Maybe this is just me but I just find that chuckling in response to what M said in this part is kinda, idk, weird? Like why would you chuckle at that? Though I probably have misinterpreted it since English is not my first language. 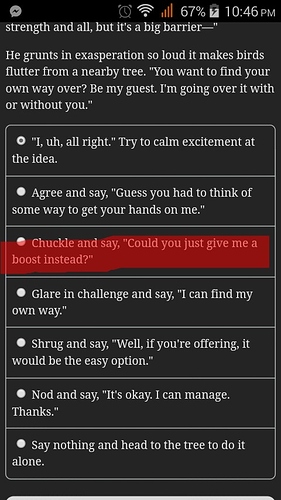 To me, it’s not. I mean, my MC has this type of sense of humor The one where you crack a joke during a moment of silence at a funeral

I didn’t find it odd, but that’s probably because I would chuckle at their grumpiness, I just cant help but find it adorable and laugh a bit lol.

Well I guess it’s really just me then lol

Oh, of course I’d laugh at the grumpiness. Not because of my strange humor. *cough *couch

IM CRYING AT HOW CUTE NATKINS ACTS WITH OUR MC

She’s so precious and needs to be protected!!

Well I guess it’s really just me then lol

I’m sure it’s not just you. I think it’s a good thing to mention.

I don’t know if I’m the only one on this but I find it weird we have to tell unit bravo about what happened to our dad when none of them had to tell their story. I know this would probably too hard to code but if isn’t too much can I suggest an option to be discreet about our father to unit bravo?

Thanks for the feedback! And for sharing in your favourite moments

You know how I love knowing what you guys loved, hehe!

@Winter - Rebeccca kinda explains it in the scene. The Agency weren’t aware it was a problem because it came on so fast, that moment when it became obviously an issue is when UB were told.
As for M, they are the super difficult one of the team to really get close to to start with. As the book and later books progress, this will become easier and the checks won’t be as tough ;D

@Nathaniel - That’s a plot point and is in the story a certain way for the flow of narrative.

As always, I’m not on the forum much (especially on weekends when I’m supposed to take breaks from technology…that’s going great today, lol!), but I am more active on Tumblr

The only thing off the top of my head while I was on F’s route when the MC was getting over the tree, it said they scraped their knee. It just seemed like that would be something F would notice cause of the blood.

Can’t think of anything else right now. I had favorite parts in every route of the demo. M’s route was when MC told M to put out their cigarette by just smiling at them. Especially fun because my detective in M’s route is mostly very passive. Lol

I haven’t gotten to the LT yet. I’m trying to hold off on it to savor the new content. But it’s so tempting T.T

I do have a quick question. What determines the kind of rumors that the other Agents tell about you? I’ve gotten both the favorable and the unfavorable ones and I’m not sure what the difference is.

prob way you reacted on reveal, murphy’s outcome, if you done tests or no…

I don’t think so? All of my MCs did the tests, caught Murphy, and the one who was the most accepting was called a “special snowflake” while my one who was confused wasn’t. Could it be the Team Work vs Independent stats?

I didn’t even know you could get bad rumour…

I do have a quick question. What determines the kind of rumors that the other Agents tell about you? I’ve gotten both the favorable and the unfavorable ones and I’m not sure what the difference is.

It depends on the amount of supernatural points you acquire.

They liked Samir tho.