Ive started keeping track of time by “Is book 3 out yet?” or “Is the next book 3 update here yet?” I think I might be a tad obsessed. 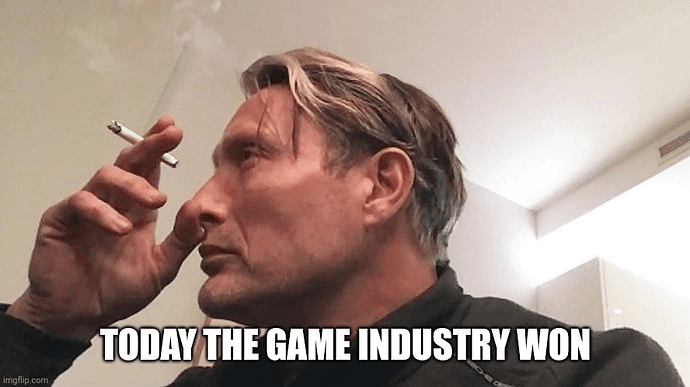 April is a long way off but it’s still better than not knowing when it was going to release.

By the time the second book was released there were already a few other hosted games/choice of games that had more words, but his replay made the game seem much bigger than it was. The only other hosted game/choice that was so much fun to play more than once was War fot The west.

And at least I know now when I should be planning to take off work for a couple of days!

This is awesome news!

This is just an estimate, so don’t get too locked into April. It could take longer, it could take shorter. We won’t know till we get closer

Yeah I know. I just want to be excited about it. It’s more of a date than we had yesterday! And I was beginning to estimate getting it in June or July of next year (possibly longer since publishing seems to take 6 months or more, and we’re nearing the end of the year), so if it’s before that, I’m happy.

yeah, seeing other games being scheduled and the third book still not having a date made me a little anxious, but at least I know that next year it will be released

Grr! Finally had a chance to look at the Steam page for bk 3 and the only RO that has no “sneak peek” is M. There’s an N one we saw in the demo, an A and F one that are spoilery, but no M.

the only RO that has no “sneak peek” is M.

Such is the way, that the grandest of things are those most closely guarded.

the short end of the stick

Seems M-mancers always get the short end of the stick, though!

One of the few things M can say to make my M-mancer blush (but she’s totally for it).

Although M would be purring and smirking, “Pfft. All I need is my hand, sweetheart/handsome…”

It’s possible the amount of words comes from the variety of choices - there are more and more branching paths as books go on. Either way, whether it’s the sheer length or the variations in scenes - or both - I’m excited for the amount of content!

Chapter 19 was certainly off to an interesting start…hehehe!

So I was hammering through the openings, really pleased as there wasn’t too much split at the beginning before it all came together. Then I was sitting with Nai one lunchtime, staring at the table as I was thinking over what I wrote, and was like, ‘I’m gonna have to rewrite what I’ve done for Chapter 12’.

I loved what I wrote, it just wasn’t right. After all the build up, what I’d opened with was way too much of a lull moment. It slowed the narrative down too much. So I went about fiddling with what I had and rewriting sections so it’s WAY better now and it flows like it’s supposed to!

But I have kept what I wrote 'cause I know I can fit it in at the end. Especially as they were love interest moments, and I really don’t wanna lose those. Sometimes you just have to work things around rather than get rid of them completely!

I was really worried this was going to set me back, because I also changed up a big choice set. It was supposed to be a skill-based choice set, but I realised it would be the perfect opportunity to bring the new stats into use! They won’t really come into play until Book 4, where they’ll start being the more important stats, but this was too good a moment not to add them in so as people can start deciding where they’d like to go on those.

Yet even with all of that, I not only hit my goal but surpassed it!! Which made me very happy

The reason I had a very specific goal this week is because I am off on vacation next week! My friend from America is visiting, and we haven’t seen each other in like…12 years? Blimey, time does fly! So we’re gonna have a fun week together, refresh my brain, so as I can come back for the big final push!

When I get back will be jumping straight into social media days. But I have few asks already scheduled for next week as well as all the usual Patreon posts, including the first of the Spooky October Specials:

Having been ordered to set up camp and keep watch for the night, F and the MC find themselves a little distracted…right up until the point a shadowy figure decides to make a spooky appearance outside of their tent.

And as the MC says, ‘You know, I’m pretty sure this is how most horror movies start.’

No news on the save system yet, which I’ve mailed Hosted Games about.

But Book Three is up on Steam ready for you to wishlist!

We’ll be doing some big, exciting marketing for this when I get back! Very fun things planned

Hope you all have a fabulous week ahead! I’ll be back on Wednesday 12th.

What a week my friends, what a week. First we are finally getting an estimate for Wayhaven after all the strife, all the exploding of Dashingdon, all the heartache for the lack of demo updates and second Cataphrak has sent Lords of Infinity to COG for copyedit purposes. Next year is certainly promising. Take care while waiting y’all.

Lord of infinity is another game I’ve been waiting for years, next year is really going to be a busy year.

I know some of you were interested in the save system. It looks like there was a recent Steam update for Wayhaven 2, and I’m now able to create a save file (the whole name a save file, and email address)

Thanks for the intel!

Yep, I’m gonna start from b1 for M again (four of them, lol: notests-Bobby, notests-Doug, tests-Bobby, and tests-Doug). Then I’ll do b2 for all of the MCs.

I never get the nosex route for M because there’s no way in hell Dezh would say no to sex with him. There are some decisions I can force her into because she could go either way, but the more she has developed, the more stubborn she is about doing anything out of character. Really, I should delete my runs for her where she takes the tests but I can force her into those now.

I just wish we could wipe out some of our saves. There are sooooo many of them (like 10 different MCs for A that I ended up having to ditch!).

I tried a Bobby route once, and regretted it OH SO VERY MUCH! “More Bobby” is definitely not what I want in my life. Could be worse, though, could be the Love Triangle.

I just wish we could wipe out some of our saves.

Yessssss! I wish we could that too. I don’t have that problem in Wayhaven, but I have like 20 Community College Hero saves, which was my first CoG game and I didn’t know how the whole thing worked, so now I have like ZERO idea what saves are for what. Like, just wipe the whole thing.

I tried a Bobby route once, and regretted it OH SO VERY MUCH! “More Bobby” is definitely not what I want in my life. Could be worse, though, could be the Love Triangle.

I figure there are some things I can god mode onto her, like whether Bobby gets into her path or not. She freaking hates Bobby with an undying passion but I want him around to torture Mason with until Mason realizes he actually cares. Well, that’s my plan. I doubt it’ll work, so I’m needlessly tormenting Dezh…

I’m probably gonna have to force her out of letting Verda or Tina find out about the supernatural, too (she let Verda because she thought he might find a cure, and when I made her check on Tina, she let her because it’s Tina, lol). But there’s no way in hell she’d ask Mason to go to their place for dinner, and it appears the MC will be forced to do it, so it will have to be that no one learns.

That would make life easier. I have 87 saves for Wayhaven (some are my husband’s, but most are mine and some of them were just testing out characters for the non-M routes because it took some time to get characters that worked for them).