The Road to Canterbury — Enter the world of Chaucer's "Canterbury Tales" 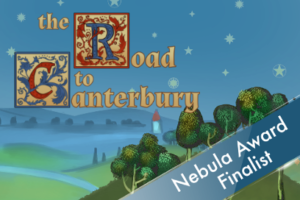 We’re proud to announce that The Road to Canterbury, the latest in our popular “Choice of Games” line of multiple-choice interactive-fiction games, is now available for Steam, iOS, and Android. It’s 25% off until May 3rd!

May the best story win! Enter the medieval world of Chaucer’s Canterbury Tales, where your journey, and the stories you tell, will change history.

The Road to Canterbury is a 175,000-word interactive medieval adventure novel by Kate Heartfield, where your choices control the story. It’s entirely text-based—without graphics or sound effects—and fueled by the vast, unstoppable power of your imagination.

London, 1375. The Black Prince of England is dying, and peace with France hangs in the balance.

You are a young pauper on a secret mission. Join a pilgrimage to Canterbury with the powerful noblewoman Philippa de Roet, co-sister-in-law to the Black Prince, and Philippa’s husband, Geoffrey Chaucer himself, the customs agent, spy, and occasional poet. Your mission is to persuade Philippa to change the course of history.

You’ll fight raiders and knights, aid or foil an assassin, fire up a peasants’ revolt, and change your luck for the better or worse. And of course, there’s a storytelling contest with a big prize—one you intend to win.

• Play as male, female or non-binary, and as gay, straight, bi, asexual and/or aromantic
• Travel the ancient route of Watling Street from Southwark to Canterbury
• Win a prize in the storytelling contest
• A quest, a joust, a trial by combat? All in a week’s work
• Persuade an influential noblewoman to change her politics
• Find love with a knight, a squire, or a traveler from distant lands
• Become a knight, or the head of an abbey, or a powerful player in London’s merchant guilds
• Solve the mystery that haunts your family
• Declare your loyalty to England or to France and determine the outcome of the Hundred Years’ War

The Hundred Years’ war is heating up: will you stoke the flames on the Road to Canterbury?

We hope you enjoy playing The Road to Canterbury. We encourage you to tell your friends about it, and recommend the game on StumbleUpon, Facebook, Twitter, and other sites. Don’t forget: our initial download rate determines our ranking on the App Store. The more times you download in the first week, the better our games will rank.

Really happy to see this game come out. I worked on the original pitch and I’m thrilled with the final game as edited by @ladybird.

I just finished my first playthru. It was fun. Failed the main quest, but I told a prize-worthy story, got a Knight’s trust and a Squire’s appreciation, thwarted a villain, spun many yarns, and slept with the Wife of Bath. It was good! I think what I enjoyed most was the gambling.

Thank you! You helped make a great pitch - thanks for taking the first steps on the pilgrimage, as it were

It was a ton of fun to work on this game!

That was, uh, sweaty - as in trying to do the best or right choices. In the end, I made the peace and got my sweetheart Elias, after saving him with a duel and winning a bow contest, being knighted and knowing how to spin a yarn…

What was missing at the end, I personally felt, was a small epilogue for me and my love, it felt a bit abrupt, if I am honest. Maybe just the start of a new adventure by his side, that would have been lovely, to be sure.

Well written, I must say, though I had to look up some stuff (so I learnt some historical facts too, all your fault, ha!).

I agree with you! It was quite good! A bit of an epilogue on the MC would have been nice, and sometimes I did not know what choices correspond with some stats (which can be frustrating) but besides that is was a very enjoyable experience! I am a huge medieval fan, so I am very happy this was a great game!

I just wanted to say the Ferrywoman’s question was a marvellous bit of writing. The whole thing was nice though, strong confident writing with interesting stories thrown in.

I just completed a playthrough of the game. I enjoyed it. The only complaint from me would be that the tales told by every pilgrim fell flat towards the end. If they had proper conclusions to their tales, that would have been awesome. And as already stated above, an epilogue would have been great. Other than that, it was a great experience.

Very engaging story. I especially liked how well the story handled its cast and their myriad personalities and desires. I admit, though, this period of history is not my forte. I took a break mid-game and, when I returned, I had trouble remembering who all the various royal figures were. Overall, I look forward to playing again.

Hmm…I’ve seen some bad reviews on Canterbury and Highway Wars for the apps having a “miserable lag.” Does anyone know what could be causing that?

It seems like my version might be bugged. Despite doing everything I can to romance Perkin and having a relationship of 66% with them I still cant ride beside them during the love story. The only options are Selime despite us only being friends, Alisoun with whom I’m having a physical affair and Bailey. I’m not sure if following the affair with Alisoun is the reason why its blocked but if it is it makes little sense considering neither of them know how I feel toward both and Alisoun not being interested in a romantic relationship.

Hi guys, I downloaded the game but it doesn’t appear on my phone. The Choice of Game app has a bunch of different games, from Silverworld to Choice of Broadsides, but not the Canterbury Tales. Can someone help me out?

The omnibus app? If i understood it correctly you need to update that one or something.

Hello! I suspect that has to do with your horse or pony – there’s a line before the choice about your mount needing to keep up with whoever you want to ride beside. Hope that helps!

Hello all! I just wanted to pop in here and say thanks to @Mary_Duffy @ladybird @jasonstevanhill and everyone else who worked on this game, and to the amazing crew of beta-testers. And thanks to everyone who’s given it a shot! I had a lot of fun writing this.

Turns out I really had a bug and a game breakig one at that. Just after Perkin told elias they didnt want to be their squire anymore I received an error and was told to refresh the page using the next button but it completely restarted the game.

Just bought the game and have both completed the pro-French and pro-English paths. I rate the game highly for its unique story, lots of stats and medieval immersion. I loved both Elias and Perkins but would really love a chance to shag the Reverend Mother. The game starts so good that it became dissapointing in the end. I would have preferred to have an epilogue that accounts for my choices in the game. I would like to know my MC’s life as a steward of an estate, a knight, a spy with Bailey or a guildsman of the Weaver’s guild.

Love “Road to Canterbury” so much… The story is well written with adorable characters , and the entire journey is portrait in a poetic classic manner …

I loves Selime very much and feels that she is the most intriguing love interest in this story … Selime came from the far east of Constantinople alone, wander around the world in a hope to run away from her past …while hoping to experience all manner of humanity via her traveling .
The romance with Selime presents a unique love story where unimaginable obstacles need to be overcome due to different of personality, background and culture … Immense sacrifice and tolerance need to be made in order for the protagonist to stay truth to their love journey

Hi @cyanide if you get it again, could you send screenshots or as much info as you can about where you were in the game to the support address? In the meantime, I’ll see if I can pinpoint anything that might have caused a problem. Do you remember if you were already in Canterbury? And did you have a romantic relationship with Elias, by any chance?