After losing a bet to your roommate, you’re forced to sign up for Odessa Dates, a wildly popular dating website taking your country, Odessa, by storm.

When an announcement by the Odessa Royal Family thrusts you into a competition for the heir’s hand in marriage, you quickly begin to realize that you’re in a lot more trouble than trying to figure out what spoon is the dessert spoon.

With rivals, romance and rituals around every corner, welcome to the Odessa Dating Games!

Hello everyone! Almost two months to the day I posted about my game idea in the Interest Thread, I’m pleased to say that The Odessa Dating Games is now ready for initial testing!

The rundown for this game:

The King’s mind wanders yet again. To a younger version of himself. His hair is strawberry blond instead of the somber gray. His crown weighs heavy on his head. He’s laughing, watching the woods burn.

It took a few reads for me to really understand this paragraph.

Also, a bit too on the nose, considering current events…

A dating site? A unknowing royal heir? Sign me up!

personally, I’m not fond of Royale court and I hate Princess .

But This is a story, so I can role play .

There are a few things though that kinda…well not bother me, but irk me a little .

The biggest one ? is the ‘create the princess from scratch’’ . That kinda make me cringe . I don’t mind choosing her gender, but the whole customization…not my thing .

I’m not saying get ride of it, but I for one I wouldn’t romance the Princess for that alone . It just weird…

The other thing is…it seem there is no path for a ‘Grumpy don’t wanna date…but warm up eventually…over time’’ .

The thing I would like to see : Can I have a Bike ? Harley is my favorite…its a classic

Also while you went on a lenght about the Q&A for the app (The author is snooping on our private data I swear XD Naughty!) …there is no mention of clothes ? No dress or skirt…let me wear a suit!

I’m still at the very beginning and it’s great so far, but there’s an error or something if you choose to leave home when you come of age. 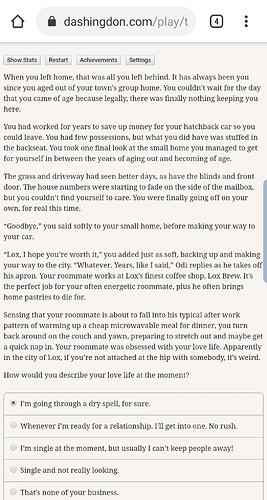 It sounds interesting can’t wait to try it

Choosing a sarcastic prince makes his name appear as “prince name” instead of the name I chose.

You didn’t know if it was possible for somebody to have so much sarcasm in one body, but the Prince handled it well. Prince name was so snippy and sarcastic, you wondered if he were ever serious about anything.

I love the demo so much, choosing a personality for the heir is so cool, and I enjoyed your writing style too

, It will be great if you can put a save option, l cant wait for more.

Well I will be following this WIP until it is finished. It has a good hook, and I personally enjoy the idea of customising the heir. There are a few coding mistakes already mentioned above, and some typos but nothing major.

In any case, I look forward to the next update.

This was a lot of fun!! The game show idea really intrigues me, and the first chapter really whets the appetite. Definitely looking forward to reading more.

In regards to the heir being so customizable, I’m a little split on that. It’s undoubtedly very cool, but something about me being able to change the attributes of this living, breathing person to the extent of their name, appearance, and personality…it’s a little odd to me considering how I’m playing as this ordinary person. I suppose it’s a conflict of who I am as a ‘player’ vs who I am as a ‘player character’. I’m not opposed to it though, and it’s a neat idea. I am very much looking forward to playing through with the rest of the game!

I like the personality choice aspect considering the MC is supposed to be a 99% match for them. It makes sense to make sure the player likes the heir as well. I will agree that the full naming and customization is a little weird though.

I wondered whats that 1% we missed…

It is most likely a contingency type thing. Oh well, it doesn’t work out, there was always that 1% we didn’t match on.

Mc: So…we got married…princessy…
Princess: Yes…yes we did!
Mc: Now…what is that 1% huh ?! eye her suspiciously
Princess: w-what 1%?!
Mc: Don’t LIE! There is 1% I didn’t get in our match! what is it! is it baaaaaaad?!
Princess: Oh That 1%! Teehee…I like suscribing to every newsletter I can find…even if I don’t know what it is about…it was under ‘‘whats your favorite hobbie?’’ …get it ?
Mc: facepalm…and I lost sleep over this…

Ahhh that’s a really good point! I didn’t think about that - playing the game I thought the 99% match was, well, just something that happened to happen. The personality and appearance customization makes much more sense now.

Lol, all this talk of 99% match and so on reminds me of the short story ‘On Seeing the 100% Perfect Girl One Beautiful April Morning’.

I’m loving the setting so far. A historical setting with modern technology is always fun.

My only feedback is to be careful about which tense you’re speaking in. Typically, CoG readers expect everything in 2nd present tense (“You walk to the door”). You flip between past and future tense quite a bit.

Definetely hooked and waiting for further updates.
Normally a competition for the throne would be something like The Great Tournament so this is quite the different method, and I don’t think there’s any other game that lets me customize an RO like this, much less call her THICC.

I was never one to play games where the main focus is romance, I enjoy a little bit of romance in games sure, but not when romacing is the main objective.

However, I admit that this wip it’s very well made.

The writting is clean, the story is intriguing and there’s tons of choices that you can make!

I’m gonna keep an eye on this one for sure, best of luck with the wip.

Or that, just some weird quirk or habit. I actually hope this 1% difference can be found in the story.