This is a thread to discuss my game, The Nascent Necromancer.

Sorcery is forbidden and punishable by death. These punishments are summarily handed out by the Witch Hunters, a powerful organization of inquisitors.

When a group of corrupt witch hunters comes to your village, accusing your brother of sorcery and wrongly accusing you of abetting him, your life takes a violent and abrupt change for the worse. After you’ve suffered more than you can bear, and endured terrible tragedy, perhaps your only option left is to become the very thing that your enemies fear and despise so much.

The Nascent Necromancer is an epic, 238,000 word interactive fantasy novel by Samuel Young, where your choices control the story. It’s entirely text-based, and fueled by the vast, unstoppable power of your imagination.

Which character(s) did you romance? 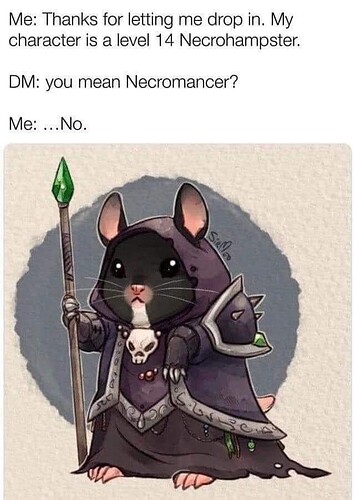 So is conjuration the path that allows for the undead hands mentioned in the description?

Yup. You can also summon a scythe that can cut through almost anything, and fire that can’t burn you.

Just want to let you know I really enjoyed the game. Very good pacing, and the party banter was a highlight. Tozi is my favorite, I really like the depth you gave to someone who can initially seem so unlikable. Looking forward to the follow up, whenever it may come.

I really like the game, especially since it seems inspired by one of my favorite, authors, endmaster

Been following this game since the first(?) version on Tales. It was interesting watching how much it changed with readers’ input and how willing you were to make the changes.

For some odd reason I liked Lonnie in my first reading and then just despised her so much on later ones (nothing to do with story changes). Something in my perspective just changed that made her insufferable for me (she is by no means a bad character, just felt like sharing).

Big fan of Yosif and our later magical companions.
Haven’t read the newly published version yet, but from reading the first post, is Yosif not romancible? Or is it a possible future romance? Also, will we learn more about his story? Who did he kill to gain his powers? Were his parents the victims? Anyone has any theories?

I changed the last 50k words of TNN before publishing it with HG, so it’s very different from how it was on Tales. Hope you like it.

Yosif will be an RO in TNN2, and you’ll learn more of his back story too.

Yosif I’m coming for you!

Yooooo, I really like the game’s obvious inspiration from EndMaster’s stories.

Yooooo, I really like the game’s obvious inspiration from EndMaster’s stories.

I actually haven’t read any of his stories, although you’re the second person to mention him here so it’s possible we were influenced by similar stories.

This has to be one of the best stories I have read in a long time.
Well done and welcome back

Dang I remember playing this demo and really enjoying it. Shame it didn’t get a Steam release.

@Autumn_Bomb My hope is that it will get a Steam release when the sequel comes out. That’s happened with some of my other games before.

Oh? Then I look forward to the sequel.

I made a poll in the original post to see which ROs you all romanced.

I romanced Tanno, but my heart was always set on Yosif :’)

but yosif is your brother