The Fog Knows Your Name -- Step into the fog and confront your terror! 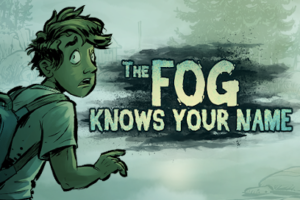 We’re proud to announce that The Fog Knows Your Name, the latest in our popular Choice of Games line of multiple-choice interactive-fiction games, is now available for Steam, Android, and on iOS in the Choice of Games Omnibus app. It’s 33% off until October 31!

Step into the fog to confront your terror: the evil that hides within.

The Fog Knows Your Name is a 300,000 word interactive teen horror novel by Clio Yun-su Davis, where your choices control the story. It’s entirely text-based, without graphics or sound effects, and fueled by the vast, unstoppable power of your imagination.

It’s senior year of high school. Your classmate Rex Keller was found dead six months ago, and you were the last person to see him alive. Half the town thinks you murdered him, including his sister, Ennis. The other half believes it was the fog.

In your town, ever since anyone can remember, people die when the fog rolls in. No one knows exactly how or why. Some say the land didn’t want the colonizers, so it sends the fog as an agent of vengeance. Some say the Devil himself lurks in the fog, collecting souls. Others believe the fog simply drives people mad, causing them to enact violence onto each other and onto themselves.

There is one element of the tale that remains the same in every telling: those who perish in the fog are guilty of wronging another without confessing to it. Those who admit to causing harm can walk in the fog untouched. The liars die.

• Play as female, male, or non-binary; gay, straight, bi, ace, aromantic, or poly.
• Stop the thing in the fog and exorcise the ghosts who haunt your town.
• Enter the fog and die.
• Solve murders. The clues are just waiting in the fog.
• Entangle yourself in romances with your friends and enemies.
• Protect the town that despises you or take vengeance against them.

When the dead speak, will you give them what they want or put an end to them? Clear the past, clear your name, clear the fog.

We hope you enjoy playing The Fog Knows Your Name. We encourage you to tell your friends about it, and recommend the game on Facebook, Twitter, Tumblr, and other sites. Don’t forget: our initial download rate determines our ranking on the App Store. The more times you download in the first week, the better our games will rank.

What in the absolute shit is going on with the Google Play reviews? There HAS to be a way to get Google to take down these obvious troll reviews…

It’s the same set of pseudonyms (which are all the same person, I believe) giving needlessly bad reviews on Sword of the Slayer. We can reach out to Google, but that’s pretty much all we can do.

Love this game. Consistent tone all the way through, great world building, detailed characterizations of even the smaller characters, captivating plot – it’s very clear that a great deal of time and care went into crafting this story. One of my favorites.

I see no reviews what-so-ever in my playstore

I just read them myself right now and I honestly cannot believe what I read. They are complaining that this game and other COG are anti gay which is far from the truth. I have never seen a gaming company that allows so many choices of queer options and even gender identity options to make you feel like you’re part of the novel. Obvious trolls are obvious. You can also tell they didn’t bother to read through the story because one review complains that this author pushes pedophilia.

I hope the author ignores all this bs because this was amazing to read and one of my top favorites of this year!

I’m in love with this one😃 I related to my character and her toughness , and rex …oh I loved rex . Replaying it though as i made a wrong decision oppps …
But I do love it, these are the books I look forward to . Very well written

Reviews appear I believe based on whatever language you have set. If that’s something other than English, you won’t see these reviews.

I loved sword of the slayer .it had everything, action romance and my character being a thief was the best …i.dont know why there would be any bad reviews

I mean, the anti-gay troll is just lazy flaming. I had a lovely time in the game helping my non-binary friend set up for a GSA meeting where we talked about their poly relationship and picked out queer-positive comics. Like, if you’re going to troll a game, at least do your damned research. The better angle would’ve been “This game goes out of its way to make space for queer and non-white people and that makes me really angry! Let’s burn it because I have lots of time on my hands and nothing but animosity with which to fill it!” Still sad, but at least tethered to reality.

All in all, very disappointing trolling. 0 out of 5 stars. Would not recommend this troll to MAGA. Unless it’s a bot, which would actually explain… everything. Dammit.

I’m pretty sure they are bots or just lame trolls who did not bother to even open up the cog because their criticisms are false. The one saying it supports pedophilia did not even bother to read the description where it clearly states they are all seniors in high school.

I don’t want us to talk too much on this versus the cog itself because those comments were just trolls. They did this to Moonrise as well trying to start some comment war that the game was anti man. It is obvious they are purposely targeting choice of games with hateful reviews that have no real purpose than to leave negative reviews. I say we leave positive reviews ourselves on apps to outshine the trolls. The authors deserve good praise on their work.

I say we leave positive reviews ourselves on apps to outshine the trolls.

I gave it a 5-star rating, which I usually don’t do for games I haven’t read yet, but something needs to counteract these trolls.

I don’t know if I am wrong but every time I try to be intimidating the stats don’t work. I mean, the charismatic stat goes up instead of the intimidating.

I’m about to play the full game, but I just wanted to say that the same thing happened to me in the demo lol! I went back and picked toughness as my starting stats to see if that would change, but I kept coming off as very intimidated in response to bullying—maybe those responses rely on a different stat?

Regardless, I’m very excited to play this game and leave the glowing reviews the story deserves!

What are the RO’S on this story? I’m really liking so far but I just need to picture them in my head accurately (I always imagine the same face for the RO I want to romance, idk why lol) thanks♡

AFAIK the LIs are: Addy, Anuja, Caleb, Rex, and Ennis.

I totally forgot you couldn’t romance Diego and got all freaked out when he showed interest in her. I should stop hoarding(?) everyone.

I had the exact same reaction; I was like “oh, sweetie, didn’t you know that no one can have romance in this but me??” I don’t know why I got jealous and possessive over someone who isn’t even an RO, lol, but I totally had the same reaction!

the LIs are: Addy, Anuja, Caleb, Rex, and Ennis.

Oh no! I mean, yes! But no! I was trying to romance Kirill but I guess all my efforts were going to be fruitless anyway lol Also, It’s a pity that all the male ROs are either a jerk or dead)? xD Well, I didn’t finish the book yet so I don’t know if one will be an asshole forever or if the other one is actually dead

I was happy to purchase this on Steam.

@Mary_Duffy – Just a FYI - I did not find the store page linked within the publisher’s page; I had to manually type the title into Steam’s store search feature to bring up the game’s store page.

(Perhaps the publishing page has not yet been updated?)

I really, really enjoyed this! One of my favorites in awhile for sure.

The ‘small, sleepy town, creepy mystery involving teenage friends’ is a classic topic that I absolutely adore (both writing and reading about!). Building suspense with established relationships in a high-stress mystery is, like, the ideal vehicle for exciting characterization and development, and it was executed very well in this one. The characters were unique, and each had their own flaws and personalities, as well perspectives about the situation, and made them stand out as individuals.

And, ah, Rex. Upon stumbling further down the interactions rabbit hole, I got tentatively excited. “Can it be? A friends to enemies to lovers situation…and with a ghost? The drama, the angst, the intensely complicated pining. Please let it be. Please.” …It was. :,) Thanks, prayers answered, crops watered, all the jazz.

If you like a bit more character focused games, and enjoy classic creepy mystery vibes, and good writing, I recommend it.