The Fernweh Saga (Scheduled Release: 5 January!) [Book One is 600k]

So, I’m writing this as I play, so it may come off a bit messy…

I’m pretty sure that comma before “[pronoun] [MC]” in the third to last paragraph shouldn’t be there. It makes Ms. Verner address the MC, not R, which I’m pretty sure is not supposed to be the case. 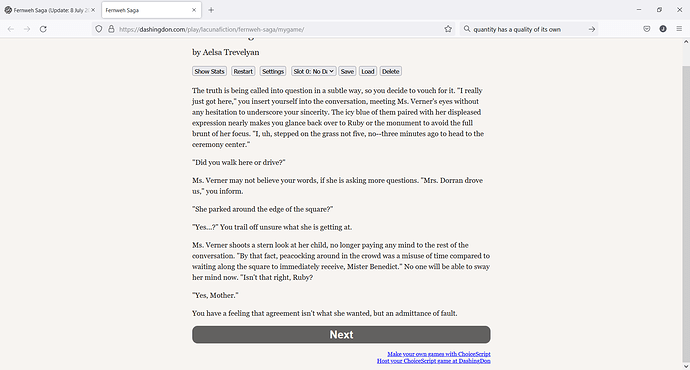 “Your time to be in front of the them is coming up.” should either be “the crowd” or something along those lines or lose the “the”. 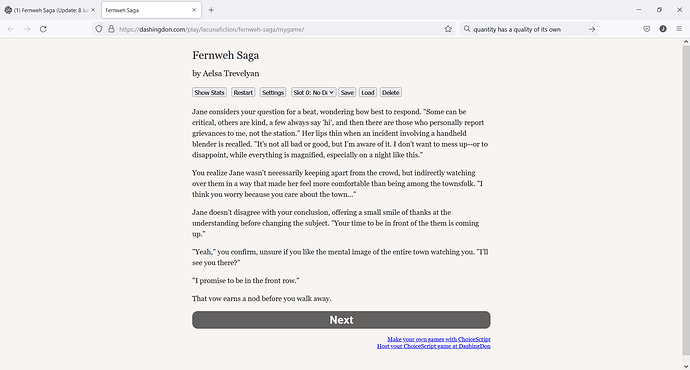 I take it the candle-lighting scene is the “pick what romance path you’re in” choice?

EDIT: Well, there’s another RO choice at the nightmare, so I guess the candle-lighting isn’t defining the romance path after all. On we go!

The way the text is structured, it gives the idea it’s Becca talking in that second paragraph there. 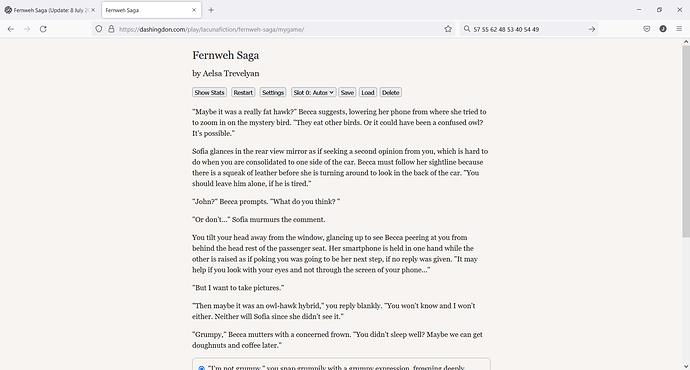 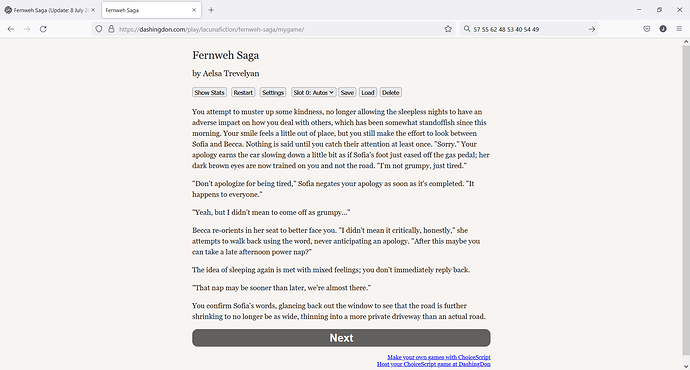 ROGUE. ROGUE investigation. “rouge” is make-up, or french for red. 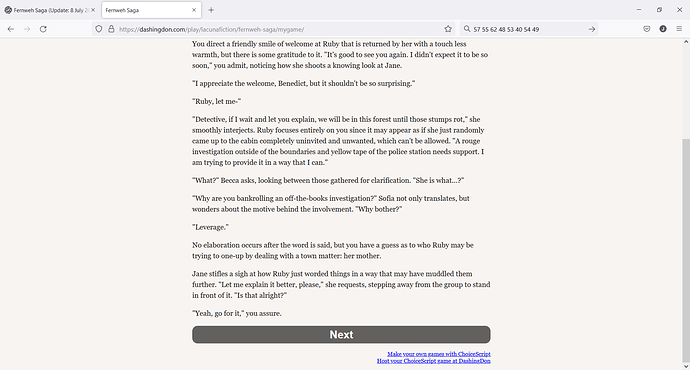 Going through the pictures in the study at the cabin doesn’t give a choice of having Jane AND Ruby support you. Don’t know if that impacts anything.

Similarly to before, the text structure gives the impression the line in the second paragraph is spoken by Ruby, not the MC. 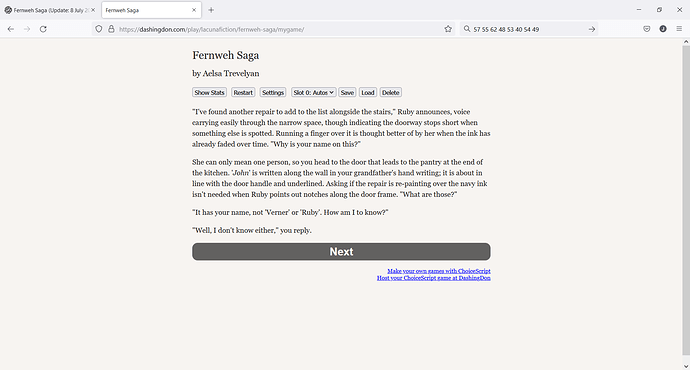 It’s “pedaling”, not “peddling” (which means selling), and “lake side” should be one word. 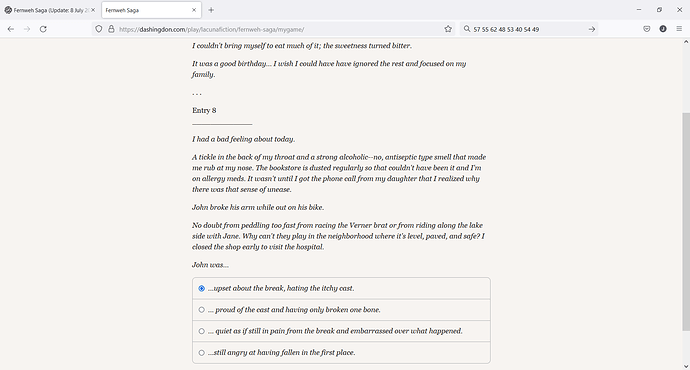 I quite like it. There are a few parts that strike me as weird, where it appears you are privy to other characters’ thoughts, which detract from the experience a bit (for me). It’s horror, which is a much-lacking genre in the CoG portfolio (possibly because it might very well be the second-hardest literary genre to pull off successfully), so that’s another point in its favour.

I can see myself tackling this series the same way I tackle Wayhaven - multiple plays to get saved games for each RO (4 in Wayhaven, because the love triangle made me feel so sleazy I can’t possibly do it, and 3 here, because if I can poly then I probably won’t do Jane and Ruby individually).

I will be certain to fix those while making edits and I appreciate you for catching them for me!

The candle-lighting scene is one of those instances where you can define whose path you are on, so yes. It is not a hard romance lock, but the game will track that you expressed interest in that path and reward you with an extra scene later on toward the end of Chapter 3. As I have it planned now, there are ‘RO moment’ scenes where you pick the character(s) you want to experience the scene with to accrue romance points. When you get to Chapter 4, you will see there is another RO moment at the end of it that sets up Chapter 5.

I may be rambling a little, but yes! That candle choice is a romance choice, not a lock in.

(Thank you for taking the time to read! I am editing/revamping the demo as I type this reply to you, so those edits will be helpful once I’m on Chapter 3, so thanks again. Best wishes.)

I finished the demo, there’s a couple more things: check the previous post past the EDIT thing for them.

Will there be a romance-lock choice, or will it depend on the values of our relationship ratings with the ROs ?

Also, someone said the J+R choices were for poly, not a love triangle: can you confirm this? The love triangle path in Wayhaven pretty much traumatised me near the end of Book 2, and I am NOT eager for a repeat experience.

Also, someone said the J+R choices were for poly, not a love triangle: can you confirm this?

I can confidently say we will end up with both of them, based on the narration

First, thank you so much for taking the time to screenshot and send me those edits! They are extremely helpful and I will be starting to edit Chapter 3 this afternoon (my timezone).

That is a great question! As it is planned now, there is no hard romance lock-in choice in this book for a few reasons that will make more sense once more of the narrative is revealed. When I do a lock-in, it will be based on choice with a warning to ensure that you get the path you desire.

As @Gloomcat said, JR is a poly route.

: I will both promise and assure you that the poly route is a mutual romantic path between the three of you. It’s been exciting writing it!

I am in the process of revamping the demo for Fernweh Saga .

Smoothing the writing, increasing readability, re-writing sections, etc. are all things that I have been working on to improve the demo.

I am excited to share it with new and old readers, though this announcement is especially important for readers with multiple saves and brand new readers.

Uploading the revamped demo will break saves and interrupt your playthrough; there is no getting around this because some variables have changed, etc.

The new demo will go live along with the New Year on 1 January 2022.

It will consist of the four previously released chapters that I am spending hours editing and it will include some new content/changes.

If you have played the current demo in the past, please take the time to try it again after the New Year with a pair of fresh eyes.

If you have not played the current demo yet, you may want to consider waiting until after the new version is uploaded.

Hello! I recently played the Fernweh Saga demo, and I just wanted to express how much I’ve enjoyed it so far (now that I’ve gotten brave enough to post on the CoG forum). Romance and horror are two of my favorite genres, and I’m always excited to find new works that incorporate them in equal measures. And though it’s early days, you’ve really done a phenomenal job at maintaining balance between the two; I’m really looking forward to when both the romance and horror aspects really start to amp up later in the book and the series.

From the beginning, the small-town setting and the overall ambience really drew me in, and the way you’ve introduced the characters and how you’ve paced letting us slowly get to know them feels very natural. I also love the attention to detail and how the characters will react/comment on the MC’s personality traits/approach to things (shout out to B and R for the light ribbing they give my MC during the car ride R offers on her cautious, “slow-poke” driving (There was a baby deer in the road, for heaven’s sake!)). Thank you so much for sharing this wonderful work with us, and I can’t wait for the updated demo next year!

I’m not sure if this has already been asked further up in the thread (Apologies if it has!), but I’m curious, in everyone’s first playthroughs, which room did you all choose? And when you finally saw it, was it to your/your MC’s tastes?

I went with “Cat’s Cradle”, and honestly, that fluffy pink adorableness is right up my MC’s (and my) alley (even if S is judging her choice and strongly prefers blue; maybe they can just agree to meet in the middle at purple?).

Of course I chose Cat’s Cradle, I’ll choose anything related to cats but… it was so no fit for my poor MC. I think she’s yelling at me for this choice. Sorry, MC, I’ll get you a LI of your choice, I promise

Romance and horror are two of my favorite genres

I’ve repeatedly said there’s not enough horror in the CoG catalog. Possibly because it’s the second-hardest literary genre to get minimally right.

Is it january yet?

@Tiffy Hi! Oh, wow, thank you so much for your kind words and for taking the time to try the demo.

Layering the romantic and horror elements is something that I have enjoyed doing while both plotting and writing the first book, since one can offer a reprieve from the other or possibly even enhance it in some unique instances. Same! The slow build aspect of the series is especially salient to the start of Book 1; however, Chapter 5 has one of those ‘dun dun dun’ or '!!!" moments we see in classic horror films that will help inject more urgency (and purpose) into the plot. It also has one of the key romantic moments for this book…

how you’ve paced letting us slowly get to know them feels very natural.

^This means so much to me! Taking a slower approach to the character introductions (we don’t even meet J and R until Chapter 2) was something I was hesitant about at first, but I think it paid off. I want it to feel natural and for those attachments and bonds to deepen (or fray) with time and circumstance. I’m glad you enjoy those additional details; they are so fun to include to better tailor and shade the story to particular MCs.

I am considering adding some new themes (at least two), but that will be for a later time since I am still working out what I want them to be. The room themes will come up again Book 1 outside of the initial arrival scene/wake up scene in Chapter 1, which I am excited about.

I know from my Tumblr that Cat’s Cradle seems to be rather popular and tends to be viewed as the room with the most unsettling (? or creepy) change compared to the others. (S would be cool with that! Purple is one of R’s favored colors, so you would have their support as well.) I have heard some mention of Futuristic Futon too.

@lo6otia I relate to both you and your MC, but especially you because I would pick anything with ‘cat’ in the name.

Sadly, not yet, but I am counting down the days to it. I’m editing the Chapter 3 nightmare sequence rn.

If I was picking for myself, I would also go with Cat’s Cradle just because it had cat in the name. As my username suggests, I love cats. The room, however, would not be my taste at all. The MC that I have that picked that room doesn’t mind it though which is what really matters. My first MC chose Nautical Nap which fit my taste the best out of all the rooms each of MCs picked. (I can’t remember what my other two picked off the top of my head, and since they’re less developed it’s likely to change over time anyway.)

I will be making a post with what new content/changes to expect.

Here is a brief teaser from one of the new choices with J:

I’m so excited for you all to replay and re-experience the improved demo.

I’m super hyped for the update! Unfortunately for me it will be live at 2 am on January 2nd so one more day to wait

Have a great New Year celebration, everyone

It’s midnight for me, so I think I’ll leave it till the next day as well.