This fairly odd fairy tale is intended to be the first of several stories united by a common theme: they will begin at the point where the traditional fairy tales they are based on end, and let you decide what happily ever after actually looks like. Will you stay with your fated true love, or find another? Remain a loyal royal, seize the throne by force, or bring the monarchy crashing down forever? You choose to play as Cinderella or the prince, both of whom have customizable names whichever way you go (since Cinderella was never a name to begin with, just a cruel nickname, and we aren’t calling this prince Charming unless we want the House of Mouse shutting this production down). Expect romance, palace intrigue, and hopefully some humor too as you enter a world that is at once incredibly familiar yet completely new and unusual.

To play the demo for The Day After Ever After, go here: https://dashingdon.com/go/7455

Hi, everybody! For anyone who does not know me, I am Matt Simpson, and I wrote two previous Hosted Games, Nuclear Powered Toaster (link here: Nuclear Powered Toaster ) and The Parenting Simulator (link here: The Parenting Simulator ). I also have a third WIP, League of Lunacy, but I have shelved it for the time being as the coding was just too much for me to manage at the moment.

This was a bit of a rough year writing-wise, as I bounced from project to project without any real traction and got out of the writing habit for the first time since I found this place. Suffice to say, I never saw this story being the one to break me out of that slump, but it did and I’m quite grateful. Like they said in Chasing Amy, this was the one least likely. But I’m having fun with it so far, and wrote more in the last ten days than in the previous hundred, so that has to count for something. I’m looking for all kinds of feedback, so please feel free to chime in with anything, large or small!

7/10/22- And that’s (kinda) a wrap! First draft is done. As always, I wait to do a word count that includes commands until the end of the first draft, and in this case it makes my current total just over 202,000. Already my longest story to date, albeit just barely since Parenting topped at around 195,000 or so after I added the Pandemic Parenting segment postrelease. I expect the number will grow a bit more before submission.

I’ll put this list in a separate post at the bottom since it is important enough to mention twice, but here’s what I am looking for over the next few weeks:
-Typo and bughunting
-Feedback of all levels, the more the better. I’d rather hear about it now than after the story releases.
-Any characters you feel like needed epilogues who did not get one.
-Any additional preinserted name options for Cinderella and/or the prince.
-Achievement suggestions (though I already have many ideas on that front, so don’t feel bad if yours gets passed over. I loves me some writing of achievements.)

Remember, service guarantees citizenship. Or, rather, being a beta reader who is either regular in contributing, has something that proves really helpful or insightful, or just generally keeps me entertained will get you included in the credits of this story upon release.

Beta testing will end around the end of August, if not before. At that time the story’s links will be deactivated and it will be officially submitted for publication.

6/17/22- The end is in sight at last. This is the longest chapter I have written in my life, at 38,632 words (code excluded). Y’all, I had never done premature death/end states before, and it is clear when it comes to these I have an impulse control problem. There are so many that I am quite sure the only way someone will see them all is by code diving. It’s like those CYOA books where they advertise 42 different endings, in that at this point I might actually have that many and I haven’t even written the actual epilogues yet (though mercifully, that is all that’s left, so hopefully it goes fast since that is less choices). I’m going to go play Chrono Cross before my lunch break is over, I am drained. But happy. It’s not long now.

3/10/22- Just keep swimming. Just keep swimming. 30,000 word chapter is up, has five different titles depending on your path. I’ve gone too far into branching, and yet also too far to stop now. Words per playthrough are 23,000 and change, meaning I have lost my grip on the 20-40% sweet spot as it currently stands at 18%. Doubt it’s coming back, either. Next chapter will either be titled The Peasants are Revolting, or simply The Uprising if I’m in a less cheeky mood. Hopefully it comes sooner than this one.

11/13/21- The next chapter, Pandamonium, is out and is a good-sized chunk at 24,000 words. This brings the story in total to just a smidge over 100,000! That word count is text only; I don’t do a count with code until the end, it’s a nice surprise to see how much that number goes up. Hopefully you enjoy it, feedback is highly desired as always and can merit you inclusion in the credits as a beta tester. Hopefully just one more chapter and then the epilogues. Enjoy!

9/10/21- The new chapter is up! It’s much smaller than a lot of the previous ones, maybe 7k words or so. In this chapter the fairy godmother finally appears and we inject a little magic (and hopefully some levity) into the proceedings. Got to earn that coveted fantasy classification somehow. The total word count now tips the scales at 75,505 words, with an average of about 16,500 a playthrough. Hanging on to the ragged edge of that 20-40% words seen per run sweet spot!

8/6/21- No new story content (that you can see, at least), but I did add 6,000 or so words in two subroutines that allow for early bad or neutral endings if you have lost too much favor with either the king or your husband/wife. They also give the option for a one-time save where you get back some favor with them. These will only be in use up to a certain point in the story, so don’t worry if your intended path involves going against the wishes of one or both of these people. You just need to make sure you’re not too overt about it too often, or bad things will happen.

6/28/21- Did I think the last chapter had a lot of spread? Oh, what a fool you were, Past Matt. This update took nearly three months and weighs in at a meaty 25,045 words, almost as long as everything that came before it (the current total is now 63,668 words). Chapter 6 is a day off, which was anything but for me to make it. Still, it is done at long last, providing, among other things, a chance to move your relationship forward with your spouse, or Ingmar for the princess and Lady Emmalyn for the prince. I also introduced a new RO possibility for each path, though you won’t do much more than meet them at this point (and only that if you know what to do and where to go). Enjoy, and let me know if you have any questions or feedback!

4/1/21- I will edit this later to add more detail when my children aren’t about two minutes from waking up, but the long and the short of it is this update is pretty chunky. 16,763 new words, which somehow passed Quicktest after just one error? I’m a little concerned, but we’ll see how it goes. Enjoy your introduction to the fabled stepmother, Lady Alana Haversham. There’s a lot of spread here since it has some significant branching, particularly at the dinner scene. Plus, writing lengthy angry diatribes is really fun. Enjoy!

2/11/21- This update came fairly close to doubling the story again, adding just over 10,000 more words. It now stands at 21,271 words in total (excluding commands), and a potential love interest each for Cinderella and the prince have been introduced in this new scene, which sees you getting involved in some proper palace politics.

12/29/20- The demo is at 6,262 words, excluding commands. I’m not so much of a rookie anymore as to make a concrete projection of its finished length (at one time I didn’t think Parenting would reach 100k lol rofl lmao), but I don’t intend for this to be super long. We’ll see if the story itself has an opinion to the contrary.

Let me just say, I’ve been wanting a fairy tale based WIP for the longest time so this came as a happy surprise!

I’ll be looking forward to more 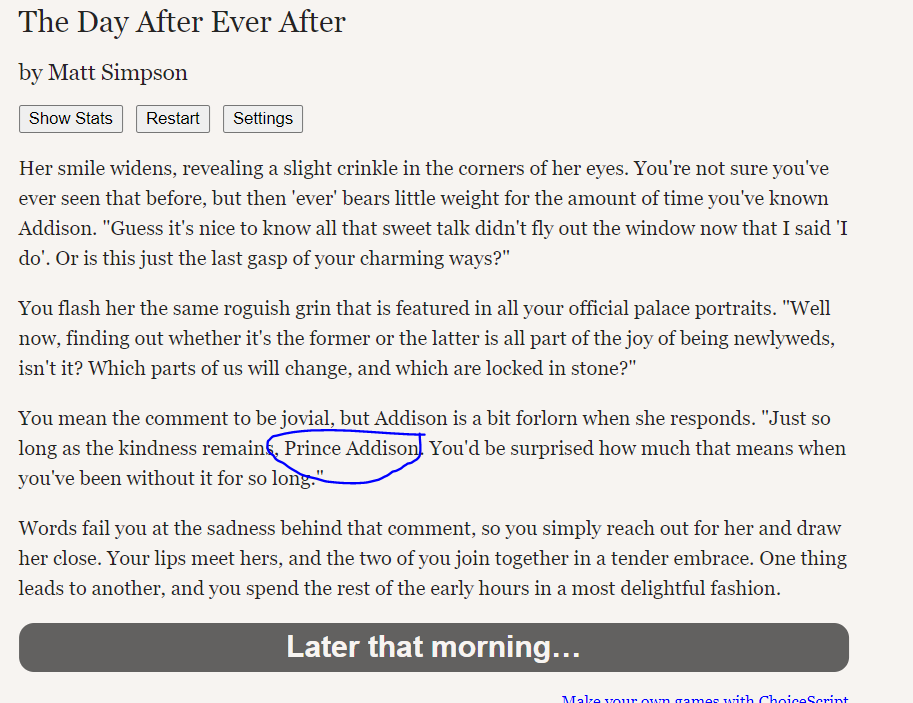 There are name lock in and continuation errors. After picking a name, both the prince ant the princess were referred to as simply ‘Name’.

Woo i love this concept, i think i read something like this in tumblr a while back. But a lotta cinderella stories that i’ve read end to just end or stay in the honeymoon period without any thing else, it’s probably the point of these types of stories but it leaves a weird sense of like an uncannily perfect bubble. It’d be fun to see the less rosy and more vicious and business part of being a royal.

Thanks for mentioning about the name issues, and ditto for @LastLau . I’ll try to work on those during my lunch break.

@peaches Glad this is scratching an itch for you!

@Moonbreaker I am hoping to bring some of the same doses of reality to the fairy tale genre that I tried to do with Parenting. Fully expect a scene at some point with your spouse scratching their rear end. I’m not even sure if I’m joking about that.

Decided to play as the prince, I chosw the name Ella for the princess but the gam3 just keeps calling her “Name” 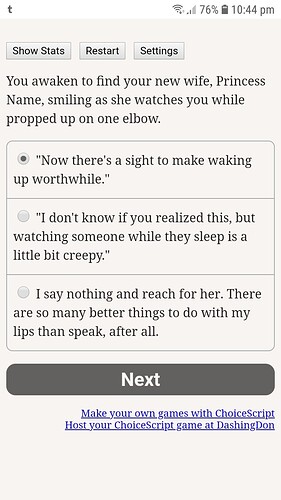 I used to be fascinated with the tale of Cinderella in my youth, And now there is a WIP on it! It definitely intrigues me and I will keep an eye on it!

Very interesting, I look forward to see how this will go

This is intriguing. Just hit 50 thread likes. For frame of reference, here’s how long my four WIP threads took to reach that level:

I’ll buy that for a dollar.

Aah, what?
Looks pretty interesting so far, though tbh the name issue can get distracting.

Yes, it’s been mentioned a few times above. When I get my lunch break I will try to resolve whatever issue is causing that, so hopefully in the next couple hours.

An interesting game, for sure. I will be following this with interest, similar to TPS. Kudos for writing this, @hustlertwo!

I remember ugly sobbing while playing The Parenting Simulator, and I love fairytales, so this is a must-read! Good luck and keep up the hard work! ^^

I wasn’t expecting this demo today, but it was exactly what I was hoping for all along as it turns out. What a fairytale come true.

I’m absolutely loving this demo so far!! Once I seen that you wrote Parenting Simulator I automatically knew this was going to be great lol. Looking forward to the finished product!!

Fantastic so fan, nice to play the Prince and make him less of a cardboard cutout than the Disney version. 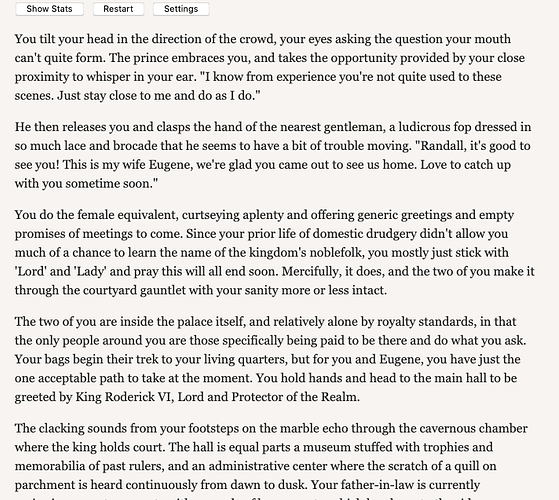 Will there be nicknames for the characters, similar to TPS?