SLAMMED! on Steam, with new endings! 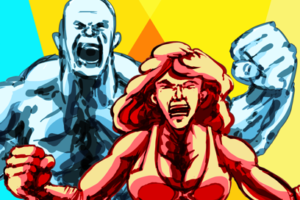 SLAMMED! on Steam, with new endings!

We’re happy to announce that one of our bestselling games, SLAMMED! is now available on Steam for Windows, Mac, and Linux. Buy it today for 26% off the regular price! SLAMMED! is a 275,000-wo…

We’re happy to announce that one of our bestselling games, SLAMMED! is now available on Steam for Windows, Mac, and Linux. Buy it today for 26% off the regular price!

SLAMMED! is a 275,000-word interactive professional-wrestling novel by Paolo Chikiamco; it’s the greatest text-based pro-wrestling RPG in the world.

In SLAMMED!, you’ve always dreamed of becoming pro wrestling’s biggest star…but the wrestler’s world is fraught with hardship and betrayal, in and out of the ring. Become a powerhouse, a technician, a high-flier, or focus on your promo skills. There’s more than one road to success.

But none of those roads will be easy. This is a world where your biggest fans are your harshest critics; where the front office is more dangerous than the squared circle; where friends can become enemies with a single heel turn; where, sometimes, the only way to win is to lose, spectacularly.

This is professional wrestling. And you’re about to change it, forever.

Plus, there are new endings! Paolo took the time to add in three new endings and 70 unlockable achievements. The new endings are also available now on our other platforms; existing customers can upgrade to the new version for free. (iOS users will have to wait a few days for Apple to approve the upgrade.)

We need your support to continue delivering our games on Steam. Our goal is to release our entire catalog of interactive novels on Steam. Our last game on Steam, Choice of Robots, was a tremendous hit; it was even featured on Steam’s valuable front page for a short time. We’ll need to continue to deliver outstanding results to prove that interactive fiction can be successful on Steam.

We’re asking all of our fans to follow us on Steam. Even if you don’t use Steam that much, it will be a big help if you sign up to follow us there, because the more followers we get, the better visibility we get on Steam’s curator list. (Our goal is to hit 3,000 followers for our Steam curation page; we’re about 30% of the way there!)

i have the app in my google apps launcher, are the new endings added to the chrome web version.

Well, I haven’t gone through all of it yet, but I can guarantee there is a romance ending with JJ (assuming you didn’t visit your sister).

JJ was in the original, think I got her the second go round after barely missing the last go round. Maybe it’s another one added on though? I know I got a slightly different one with Ecstasy when it updated on android.

I bought this just to review/support it mostly lol, but 'm getting a fatal error 77 right now when trying to start it

Uh oh! Please contact us via email at support@choiceofgames.com (please include a screenshot of the error) and we’ll try to fix your errors.

Spoilers below for the new stuff.

There’s some new JJ endings from what I can see. The game used to end just after the fight with JJ, unless you chose to go home as your ‘retirement’. There’s now several proper endings though if you don’t. I count two files, three endings in them though, one if you’re romancing JJ, one if you’re friends with Griss and JJ, one if it’s just you and JJ as friends.

There’s a brief flirtation with Alex, in the defeating Solitary ending that looks new too. You need to be male and heterosexual though. (I can’t remember that being there but I’ve never played through as straight and male before though so not sure.)

The Ecstasy romance ending has been tweaked from last time I looked at it so you’ve only got an engagement ring in your pocket if you’re female and Ecstasy is male.

There is another editing error I saw on the Steam version (going through it now), and may be on others:

Your mind begins to fly back to little arguments, those everyday disagreements that every couple has. or so you thought at the time, but maybe you were wrong, maybe—

If you look for the line after ‘couple has. or so’ that ‘or’ should be capitalized. And sorry about not sending screenshots, but usually nothing comes of it.

The referee comes down, no doubt at Alex Dobbs’s instruction, telling you to put the chair away, this second, or be disqualified.

You punch him in the face.<<

The problem with this is the second sentence. The sentence is fine, except I was fighting a female JJ, so the variable for gender is probably wrong.

“I have enough pull with head office that I can get the GWA to hire you back. They won’t throw JJ under the bus without proof, and Giana won’t rat her out—my nephew left the country months ago—but the GWA will issue a statement to the effect that your drug test was in error. You’ll be back on the roster…subject to a few conditions.”

You still have Atuen referring to Giana as her nephew when in this case it is her niece. (the line --my nephew left the country months ago–)

Hey Dan, I got it! Went through the usual verify cache/reinstall game, and it was dl’ing and reinstalling Steam over itself that did the trick (?! steam, you so crazy) Can’t wait to get to the new endings here

Thanks you’ve told me all I’ve wanted to know! One more question though, who’s Griss?

Ohhh that makes sense now, thanks!

Thanks for these! Will wait a bit to see if any other errors/typos roll in before editing.

For those who have the game on an iPhone/iPad, the update for IOS has released, at least in the U.S., with the achievements and new epilogues

Yaaay! That’s what I was waiting for.

@P_Chikiamco If you have a moment, would it be possible to get a hint on the Beast Achievement? I assume you get it with Solitary, but I’m having trouble figuring out.

Heh, I figure I will eventually get Blue Pants…I just am having an extremely hard time getting Blue Pants; go to weak, and you can’t survive facing Super Horns (especially if you need to convince her to face you one on one).

@FairyGodfeather Thanks, got it perfect, though it was tough guessing which choices dropped the stat. Is it ironic that it is hardest for me to try and throw a match with Paul?

Not at all. I’d much rather lose to anyone BUT Paul