Yep, I just fixed that. What do you mean “I had to problem cycling through and accessing any of the stat screens?”

Typo. I meant “no problem.”

Edited, and fixed all problems. Link will be updated.

Seems off to a promising start. @Eos Is there a reason why you have only a paragraph per page? You might want to see about formatting the story a bit.

I did like what I saw so far, and I think this has potential.

First, thank you very much for taking the time to write all of this. You’ve also pointed out two important inconsistencies, so thank you very much for that. The “correct” version of the Festival allows a visit to the Temple district, where I introduce the rest of the pantheon. I chose to cut the ability to change professions because I had some trouble implementing it and I plan on including other locations (accessible from the ship) where the player may improve their stats.

As for a game design standpoint, I’m planning to have many, many other locations with other main storylets accessible only through certain combinations of stats. Right now, this is the starting area (planning to make it the demo area), so I’m just introducing characters, world, and mechanics. Also, could you kindly include a screenshot of the error message? It helps immensely with troubleshooting.

About the questions you have at the beginning, I left most of it for the player to infer, because the exposition dump at the beginning is already cumbersome and I don’t want to add to it. You can infer that most people with the plague go to the temple because the priestess mentions “temple records,” when you inquire about your family. I will expand social interactions, but this being a glorified character creation/introduction to game mechanics scene, most of the heavy social stuff will be relegated to other locations.

Hey friend, I recommend you take a look at CSIDE if you are not using it already; with it you can run QuickTest and RandomTest to help out fixing bugs and problems in your game.

I’m glad to see people helping you on this project

The elf writes, then seals a letter, and hands it off to a courier, which sprints into a side passage.

Label bubble_209836008 produces error. If you have #choice text in *if body, you always need to put brackets around vars and their values.

If that’s a float, it’s missing a zero before the dot.

Could you tell me where that turned up? What choices did you select before the error message showed up, and what choice made the error show up?

Fixed everything and updated link. Thanks!

Thank you and this is a awesome project 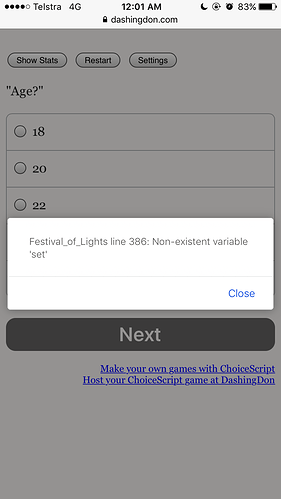 … are pretty prevalent for this project. Are you running quicktest each time you introduce new chunks of code? 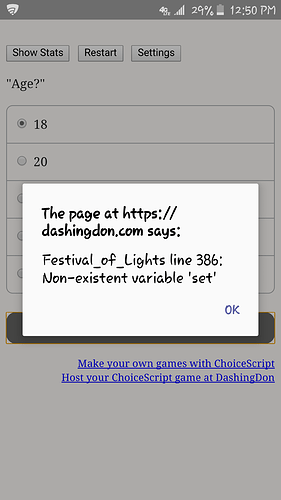 Yes, that error was probably due to me attempting to convert a text variable into a numerical variable. Age will be 0 in stats screen until set by player.

I am a very impressive baby

this is good story you made