Samurai of Hyuga is released!

I have a question I’m sure this was already covered. Is the attunement bar really necessary?

It will give a bad ending if too low 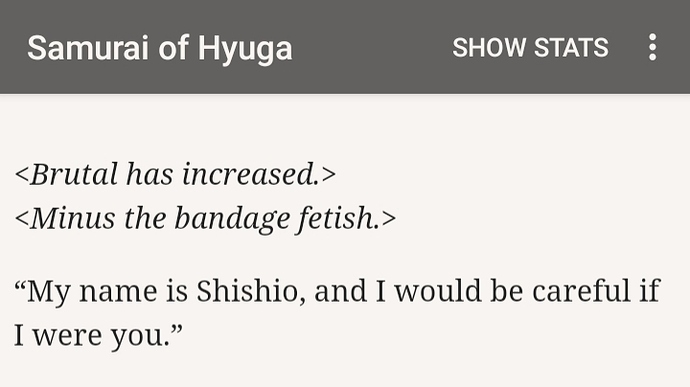 It’s a bit harsh in hindsight now that the RuroKen author has been found as a pedophile.

I can’t help being disappointed that there’s no bonus from naming the protagonist Nanashi/No-name, considering the other name references.

I didn’t even know certain names were practically easter eggs! That is really cool.
Also, could you please elaborate on the RuroKen part? Who are they?

Also, could you please elaborate on the RuroKen part? Who are they?

So Rurouni Kenshin, or RuroKen for short, is basically what Samurai of Hyuga is based off, copies from, or references heavily, depending on how you feel toward SOH. Shishio is actually a character from RuroKen… who is covered in bandages. And also maybe on fire.

It was written in 1994 and ended in 1998. It features an atoner ronin, the heir to a dojo, an opium-smuggling doctor, a hot-headed mercenary, a kid, and a ninja in the Meiji era of Japan. It was well-known and well-loved for being the first manga created for and marketed to both boys and girls.

However, in late 2018, after restarting new writing on the series after twenty years, its creator Nobuhiro Watsuki was arrested for possession of child pornography (naked under-15 year old girls). He said “I liked girls from the upper grades of elementary school to around the second year of junior high school.” After he was fined, serialisation and publishing of his writing continued in Japan, but to my knowledge it’s officially on indefinite hiatus in English (?).

I can’t help being disappointed that there’s no bonus from naming the protagonist Nanashi/No-name,

Oh wow. Did not expect that.
It’s kind of funny to think that some people were actually worried about pedophilia in SoH because of Masa’s age, too. A not very fun coincidence. Though I suppose part of the worry was also because of the author hammering in the ronin and Masa’s age difference in multiple instance.
Kind of a bummer we can’t really romance Masa because of that (if they are not underage).

Kind of a bummer we can’t really romance Masa because of that (if they are not underage).

Shrug. There’s not just an age difference but also a power imbalance between the two as young, sheltered client and experienced, older bodyguard. Masa is gullible, childish, implicitly trusts the ronin on most accounts, a target for one reason or another and not really able to defend themself.

It would take more than an “magic ageing up overnight” or “haha I was actually 18” to fix this but I think a timeskip - whether or not the ronin is put in stasis - would work, especially if it leads to Masa coming back as an experienced and self-sufficient independent individual that doesn’t have to rely on the ronin for one reason or another. As long as they’re no longer likely to be taken advantage of and are able to stand on their own two feet as a (young) adult I see no problem here.

A not very fun coincidence.

Probably the reason why every time someone talks about it we all go apeshit in the thread. For most of us, the wound of SOH’s predecessor being written by a pedophile is still all too raw.

@Laguz
I really don’t think ‘predecessor’ is the right word here. The second half of Book 1 borrows heavily from the first season of Rurouni Kenshin, that’s absolutely true. Interpreting an arc from one of my favorite childhood animes in first-person interactive text was great and was, in retrospect, a great aid to me back in 2015. Back then was before I had a firm grasp over storycrafting. Thankfully I’ve learned a thing or two since then!

As for the series, the Rurouni influence really doesn’t go much beyond the opium and initial inspiration for Hatch’s and Momoko’s characters. I don’t think I’ve ever actually revealed this on the forums, but Samurai of Hyuga isn’t actually very anime at all. Sure there’s ‘-san’s’ and ‘bakas’ and anime characters on the cover, but it’s ultimately just flavor.

SoH actually shares a ton in common with the hardboiled genre. Just listening to the narrator should give it away. It’s far closer to a noir than a shonen, and in many ways, once you get past the izakayas and katanas, it’s insanely American.

It does it a third time going from 97 to 93 at the start of chapter 14 before any choices.

Don’t worry she isn’t. She was 14-16 in the first book and time has passed. A couple years. Using baby fat on the cheeks is a terrible assumption. I still had some in my early 20s.

Towards the later chapters of all the SoH games, at the start of (some) of them, I divide both attunement and max attunement in half and re-calculate. This is done to make choices later on still impact your attunement score meaningfully.

…That honestly wasn’t a great example, but you can sort of see how that, after making dozens and dozens of choices, a single choice would only change your attunement score by a fraction of a single %. I divide the scores at times to avoid this. During this division however, scores can increase or lower due to rounding.

It is strange to see your attunement dropping that much consistently. Keep in mind, the game does not report to the player when they make a wrong choice (most of the time). That may explain some of it?

Unrelated but important, in Book 1 there was an error where, if your character was Charming and Perverted and Protective, all the choices at a certain part in the story would result in losing attunement. If you import your character into Book 2, the patch should be applied. So if you’re going for that 100% attunement, please keep that in mind.

Was originally playing with an all blue stat ronin. I switched from stoic to charming on the run i just did a minute ago and it didn’t give me any of the sudden stat drops at the begin of chapters. So i guess it had something to do with the stoic stat itself.

Hey guys, I loved this game very much. Made me super interested in CoG and I can’t wait to see what you guys publish next!

New to the forums but I’ve been playing CYOAs from this site for a while. I recently played Samurai of Hyuga book 1 and it seems to be a blatant copy of Rurouni Kenshin so I was just wondering is the rest of the series like this? Not to put down the author since I’m sure the whole series is made with love and care but I’m not sure I would want to play the rest if the story is more or less just Rurouni Kenshin’s story with a variation here and there.

I’ve just started this series and I’m chapter 5 of book 1. Reminds me of when I was younger, reading fanfics on fanfiction.net and sometimes the characters would say “baka” or call each other “(name)-chan.” Ah… simpler times!

Funny coincidence there’s a character named Jun. One of the names I considered for my protag was “Junko”

I’ve finished my review of Samurai of Hyuga. Thanks for reading!

Samurai of Hyuga By Devon Connell I motioned to slide the shoji screen open but Hatch held it shut. I couldn’t help but notice that he had a nosebleed. “H-hold on a second! She may be changing…” There was no force behind his grip, which really shouldn’t surprise me. I shook my head and shoved the door aside. The room was empty, much to Hatch’s dismay. Before I ever read Samurai of Hyuga the first time, I saw so many people decry the conversations and some cultural references as childish or n…