Hii guys, I’m probably blind but I can’t find anywhere how to make opposite stats. Like those percent stats where (mostly) in the beginning it is 50/50 each and by making choices it goes either way: like childlike/mature good/evil independent/dependent. 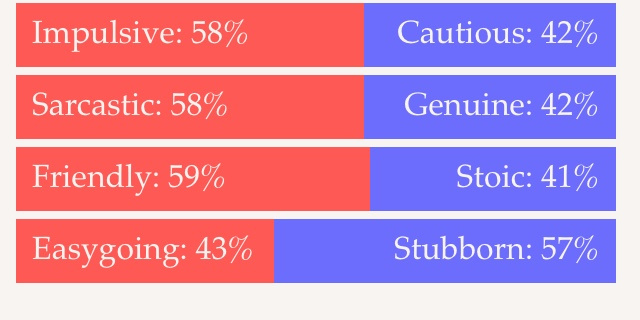 This effect is what I want achieve

Anyone who can help me and give me an example?

I think (on mobile atm, cant check quickly)
First will display as
Var1name vs text2
The other as
Text1 vs text2

When you create an opposed pair, you only need to create a variable for one of each of the pairs and you use text labels on each side. The way they’ve done your example is:

Create the variables for each of the stats in startup.txt

And in choicescript_stats.txt they’ve used:

I tried to do it like you guys said but something is still wrong :s 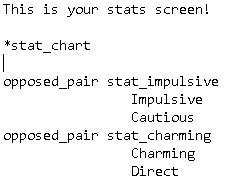 can you guys see what I did wrong?

hi, just popping in have u tried making sure theres no space between opposed_pair and stat chart and arranging them so that the opposed_pair is under the t for stat_chart? i know indentation is super important…

edit: sorry super weird how it wont allow me to do spacing properly… 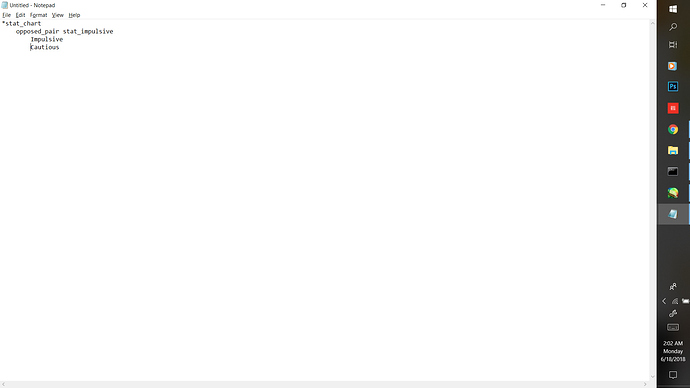 oohhh thank you for that XD had a hard time lol

You don’t need a blank line between *stat_chart and the following *opposed_pair and when you’re indenting, use either spaces or tabs, never try to use both.

perfectly aligned, no (faulty) spaces and starting under the T of stat, with or without space between *stat_chart there keeps being a fault in the system

Got to be something in your files. I didn’t just type that out on the fly, I created it in a test file I use in CSIDE and checked that it worked before copying and pasting it in to the forum.

Can you show us exactly what you have in your choicescript_stats file. Put ``` above the text before you paste it in so it formats correctly.

I will do it but I dont think it would turn up with much, did not put a lot before it since I’m still trying to form the beginning stats :s but if you think it will help. (this is what you mean right?) 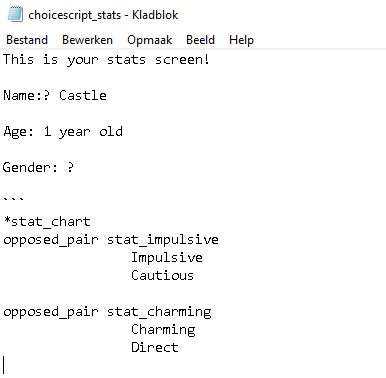 You pasted an image. We can’t see what’s going on with that. Can you just copy the text from the file onto the clipboard and paste it in as a forum post. Put ``` above it so it formats as text.

If you’re on windows, CTRL+A selects everything in the editing window, CTRL+C copies the selection onto the clipboard then create a reply in this thread, add the ``` followed by a return and then use CTRL+V to paste the code in.

Thanks, that’s better. It’s easier to see what’s going on there

opposed_pair needs to be indented.

Choicescript is like Python in the way it uses indents to identify code blocks. Correct indentation is essential.

You’re welcome. Glad to help. Once you’re over those first few formatting choicescript headaches the rest should just fall into place