Did you like Night Road? The expansion is now ready for testing! We need testers!

• The monstrously deformed information brokers of Clan Nosferatu
• The ruthless schemers of Clan Lasombra
• The tempters of the Ministry, purveyors of vice and enlightenment
• The doomed Ravnos, a nearly-extinct clan now cursed to wander the world
• The necromancer-gangsters of the Giovanni family, members of Clan Hecata

Finally, uncover the treasures and horrors of a whole new mission: the fetter of a powerful ghost has just gone up for auction and every vampire faction in Tucson wants it. Will you help the necromancers of Clan Hecata claim the ghost for themselves, or work with the Camarilla to thwart a dangerous alliance of the unbound? Along the way, you’ll have the chance to bid on (or steal) priceless occult artifacts, tangle with the dead and the undead, and either foster a new alliance or dash it to pieces.

Email beta@choiceofgames.com to sign up. Preference will be given to established testers and people who tested the original release of the game. Remember to submit the name of the game you want to test (Night Road), your real name, and your forum name.

There are definitely bugs. Don’t freak out when you encounter one. That’s why you’re beta testing.

Things to focus on:

A question the joinable clan will be Giovanni, Hecata or another of the death clans and anti tribu who joined the new clan of Death?

I think it is a good question for beta testers who know the lore, could know where the game stands to suggest new options. A Giovanni would certainly carry the heritage of the family ties That a Nagaraja, a Real Capadocian or a samedi doesn’t have.

Sorry If the question is too nerd for this

You’re a della Passaglia, which is a Giovanni subfamily.

VERY interesting, that opens a window to the inner fighting that helped destroyed the Giovanni

I wonder if there will be any games that allow Tsimisce pcs. I’ve always wondered what that’d be like.

Pls remember to follow the usual beta procedures and guidelines.

Preference will be given to established testers and people who tested the original release of the game. Remember to submit the name of the game you want to test (Night Road), your real name, and your forum name.

Oh, what fun!
I certainly enjoyed the last time I tested a game.

Will we be able to restore characters from The masquerade: Night road?

It’s an addition of new choices (and a new mission) within the existing story, not a sequel.

Will Chimerstry and Serpentis be wholly new disciplines or amalgams of Presence and Obfuscate/Protean?

Appreciate this answer, going to use this to rant quickly that Chimerstry being a Presence/Obfuscate amalgam, while logical, gives the Ministry Chimerstry for in clan prices, which I am not a fan of. Not a problem with the game, just V5

If you have a chance to do a Ravnos playthrough, that’d be awesome.

Some dialogue changes needed to account for ministry protean. 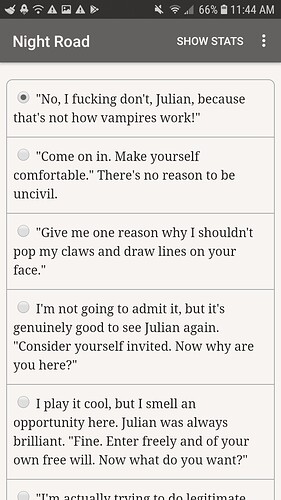 DLC seems to be messing up the hunger mechanic for messy criticals. I’ve triggered 3 before I even completed the first mission. The first 2 were on 2 hunger, the last on zero hunger. 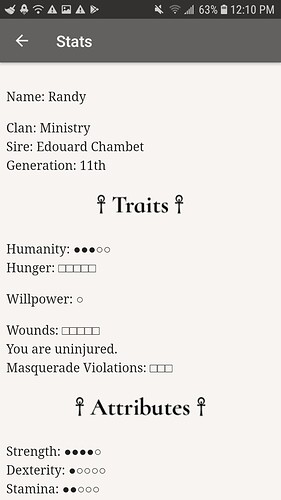 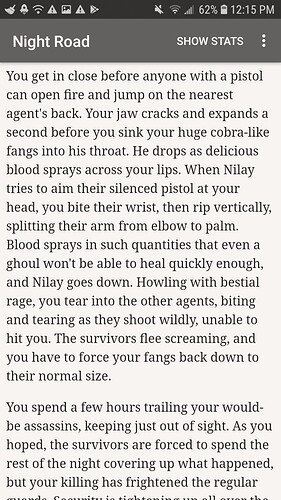 Congrats on the release, guys!

Know it was a lot of hard work,