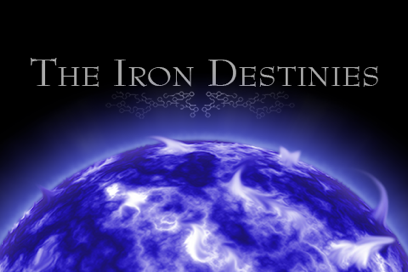 This is the story of Fe, an Iron atom that caused a supernova. As you take the helm of this atomic hero, soaring through the fabrics of space at the speed of light, take heed of the forces that are not only in plain sight, but also hidden in the darkness, for they are the keys to unlocking the secrets of the Cosmos.

The Iron Destinies is an interactive sci-fi novel by David Berner, where your choices control the story. It’s entirely text-based–455,000 words, without graphics or sound effects–and fueled by the vast, unstoppable power of your imagination.

David developed this game using ChoiceScript, a simple programming language for writing multiple-choice interactive novels like these. Writing games with ChoiceScript is easy and fun, even for authors with no programming experience. Write your own game and Hosted Games will publish it for you, giving you a share of the revenue your game produces.

Play as ferric or ferrous?

I played the free chapter and I am not sure if it is worth the money. 3€ is too much. Can someone who played it give me summary what is about and wheather it is worth it?

450,000 words is quite a bit but even the free chapters show quite a few possible replay points. Based on those two things, I’d support the author.

I tested this when it was in beta going off to buy it now!

@Zolataya
not all of them are at the exact word count they might be a little below or above just a fact wanted to share because if they all were so even on words than the world would be filled with super computers like skynet or something where they can have a 450,000 word book in exact even digits

Hmm, but what it is about? Becuase it didnt show much of anything in the preview.

I laughed hard at the Irony, but the demo did a terrible job at showing us what the hell the game is about.
Does it stay in this floaty mindset from beginning to end? It feels incredibly purposeless and random.

I must agree with @GoldenXan - the demo is… bizarre. I think it aimed at being unusual enough to pull people in despite being vague, but it was a bit clumsy. Rambling prose and detached POV can be atmospheric, but in this case I think it fell flat. It’s more an editing issue than anything else, but as the introduction to the game it’s very unpolished. Normally this type of game would be right up my alley, but I’m hesitating because the demo gives the impression of a creative idea not fully realized.

Irony is strong in this one…

I appreciate your point but going off the bullet point above: [quote=“dfabulich, post:1, topic:18181”]
Soar through the tales of a 455,000-word narrative of intrigue, intuition, and adventure.[/quote] I did underestimate the actual count.

450,000 words (give or take) is still high on the scale of usual word counts. That is the point I was making.

Again, this is my opinion only: An adventure that takes you through many different possible stories through universe building is a fun romp; it is not necessarily going to be a serious adventure nor a whimsy … but both can be seen as possible.

40 endings means there are several different types of adventures. Yes, there is a bit of fancy (as in humor) in the beginning but if the author had a scientific textbook delivery, I’m not sure many of us non-science types would be able to enjoy the beginning.

SPOILERS please. I want to know more this is not enough for me to buy the game.

How do you unlock the option to click. “I found the black hole” after exploding?

I’m guessing (and this is a long shot) that you might be able to make a second play-though NewGame+ style, where you end the game and the begin it again, and the option might be unlocked.

Can’t say because I haven’t played it whole, but that’s what I’d imagine it to be.

Any one who played this game recommend it? the demo didn’t do a very good job at catching my interest

I recommend it. It’s a great game.

I’ve only played it through once, but there’s been a lot of imagination put into this. It’d be nice if the demo point could be moved a bit later since I’ll admit I was divided as to whether it was something I’d be interested in reading based on the demo alone (In the end curiosity won out

) but I’m guessing it had to be put there due to story branching?

I wanted to clear up a couple points of confusion posted in
this discussion.

GoldenXan, you are absolutely right in your post. The “Black
Hole” choice at the beginning of the game can’t be chosen for the first play
through. It might take several play-throughs to do so. It is the hardest trophy
to achieve and is essentially the ending, even though a player can select it
and still have over half of the game left to explore. The particular destiny that
awards the achievement to unlock the Black Hole also requires a great deal of
the stat “Intuition” to even be able to choose it in the first place. The game
requires the player to do several play-throughs to achieve the ability to
select certain destinies. That’s the reason why some of the destiny paths are
shorter than others. They are meant to add more and more stats for the player
to discover tougher levels to complete. The beginning of the game advises the
player to not explore one, but to explore many.

I recognize the ambiguity of the beginning and of the
directions, but that was my vision. I want to make it clear that I am not here
to debate opinions, as everyone is entitled to theirs. As a matter of fact, reading
criticism is a great way for me to improve upon what I have done to prepare for
my next game. To all of you who have taken the time to not only play my game,
but to offer comments, I thank you greatly.