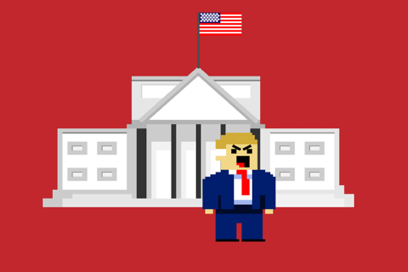 You arrive at the White House for your first day as an intern. President Disaster snaps his fingers and points at you: “Hey! You! I’m appointing you my new Chief of Staff.” Now you have one month to get us to election day and save the world from the worst president ever. Are you up to the task?

President Disaster is an 35,000-word interactive humorous novel by Maeve Adams and Marc Faletti, that puts you in the middle of the messiest drama in American history. You’ll play diplomat, crisis manager, creative accountant, and national babysitter. Experience new scenarios and combinations every time you play. Decide if you’ll resist the dark side…or give into it.

Marc Faletti and Maeve Adams developed this game using ChoiceScript, a simple programming language for writing multiple-choice interactive novels like these. Writing games with ChoiceScript is easy and fun, even for authors with no programming experience. Write your own game and Hosted Games will publish it for you, giving you a share of the revenue your game produces.
24 Likes
Schliemannsghost July 17, 2020, 4:43pm #2

Too real for me!

Didn’t this come out weeks ago on play store?

Very timely game. I remember playing this one when it was a WIP.

Only 35k? Also, “messiest drama in American history?” Not even close. Read some US history.

It’s free if you don’t mind timers and it’s a joke. Humour’s picky like that. It definitely won’t be for everyone. It’s why most humour based games on HG don’t do terribly well (although there are exceptions.) I dunno, maybe I’m desensitized. Where I’m from people pull fun at our politicians all the time whether they’re generally popular or not, and no one takes particular offense.

This was fun! Somehow it was available in the Play Store a week ago (you might want to check that) and I picked it up right then. For a free game, well worth it.

Where I’m from people pull fun at our politicians all the time whether they’re generally popular or not, and no one takes particular offense.

You should see the memes here, they’re hilarious as hell. Even the representative of my area puts them in his page

I’m not sure where else to let anyone know this, but the last bullet point in the first post is listed twice.

Are you implying that COG wasnt political before? We can literally support anti-authoritarian movements in most official COG titles. The staff have even made their opinions known very frequently. By comparison this game is just a light and fun tongue in cheek reference to american politics. Like, right winger arent just a mass of trump supporters either, joking about trump is kind of universal nowhadays.

COG has literally always been political my dude

this is a Hosted Game, not a COG title, so no the company is not making a “political statement” by publishing a satirical title of current events

I hadn’t realized this title was completed! I love seeing things go from a WIP thread to an official release. I’ll be checking it out, it’ll be nice to play something silly these days

You new here or something? Lmao

Okay, friendly reminder: Running a government is not similar to running a business, those are completely different levels but are connected.
With that being said, This game is already promising alot of comedy and political-thriller by just existing or something alike

Disagree. Running a business and running a government are totally different.

These two objectives are, broadly speaking, in direct opposition to one another.

-Running a business and running a government are totally different.

That’s what I meant

, Btw I think its a nice game, and its free, so, no harm done to anybody

‘Free’ isn’t exactly true. You can buy it if you don’t want To wait 20 minuets to continue to the next part.

I just saw this and now I’m

Just what we need, a bit of well-timed political satire for the non humor-impaired.