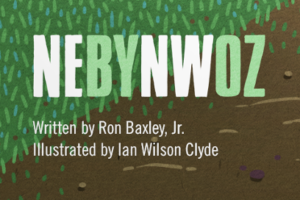 Become a village junk collector with high, magic ambitions to rule in Northwest or Northeast Oz. Multiple cases of mistaken identity involve everybody in Oz from the original Frank L. Baum Oz characters to even yourself. You will be thrust into intrigue and suspense at every turn as you try to replace the dead Wicked Witch of the West and Wicked Witch of the East. It’s 50% off until May 8th!

NE By NW Oz is a 30,000 word interactive novel by Ron Baxley, Jr., where your choices control the story. It’s entirely text-based—without graphics or sound effects—and fueled by the vast, unstoppable power of your imagination.

You may soon discover that some may or may not want you to have any of this roles but to remain as you are.

Ron Baxley, Jr. developed this game using ChoiceScript, a simple programming language for writing multiple-choice interactive novels like these. Writing games with ChoiceScript is easy and fun, even for authors with no programming experience. Write your own game and Hosted Games will publish it for you, giving you a share of the revenue your game produces.

Make sure to update your game. On Android, that means making sure you have the latest version. On iOS you should open the game, back out, and enter it again. On the web use Ctrl+R (Cmd+R) to clear the cache.

It is only 30.000 words??? Is that a joke? Whatever i choose just gives me a try again and same set of choices till i choose one that it wants me too…

It was never meant to have an initial stats screen. Points start a few screens in when you make your first major good or evil choice. Then you are updated with point accumulation during game play.

Also, I was advised that when choices kill a character that they be given a chance to try again.

There are two major ways to arrive at Glinda’s castle. One is by facing obstacles. The other is through discovering a hidden character.

As per the length, this was my first game here and that was the minimum given. It may be a little longer. That was an approximation.

Also, I waa advised that when choices kill a character that they be given a chance to try again.

Ah. So that’s why the scenes kept repeating. I was confused as there was no indication that I had died, or had chosen the wrong choice. Perhaps it would have been wise not to have one of those on every choice screen, but I’m not the author.

It was .99 so it doesn’t really matter much. It’s an intriguing idea atleast…

There should be a message that states that a magic force takes you back to before you made your wrong choice. Later, when you get a certain magic item, the item is what allows you to go back before you made your wrong choice. There are multiple solutions at times. Rooms that are in a loop are set up for you to ask to leave or to select leaving at times too.

Btw, not every choice screen in the game has multiple options that result in death if I am not mistaken.

Getting error telling me to update when I try to play the demo on the website.

Please report any errors to the support email address (either game specific, or just general support at choiceofgames). It’s difficult to follow up on and track reports on the forum, and CSR has a tools to tackle common problems, or determine how to reproduce an error if it it’s something more technical.

Once again, the exclusion of the stats screen was a conscious choice. There will come a point in which you will make a major moral decision that is quite good or quite evil and is coupled with your becoming an eventual magic user. At that point, good points or wicked points will accrue,and you will be up-dated with said points along and along to let you know which direction you are leaning. You will reach a point of no return toward the end of the game (there are two major branches mid-way leading you to western Oz or eastern Oz, etc.) in which you will definitely be labeled as good or wicked. You definitely will have earned that label by that point.

Finally, there are areas with a little more exploring that will explain more of the over-all Hitchcockian-esque mystery going on in both the Winkie Country and Munchkin Country. Nooks and crannies of some of the smaller settings can lead to some surprises here and there. You can lean towards trying to conquer or benevolently lead either area through magic while exploring what happened to either region after the Wicked Witch of the West and Wicked Witch of the East expired.

Note: This was a very rusty programmer’s but usually a much better writer’s first attempt at using ChoiceScript language to make a game, an experiment with a primary intent to harken back to classic adventure games and Choose Your Own Adventure books in which there were a lot of dead ends. I know it is far from perfect, but it was started at a time a few years ago when I had a lot more time on my hands and went through several hiccups, including having to find a graphic artist to do illutsrations to replace photos of an Oz theme-park I paid to stay in but still retained copy-right of the images, etc. I spent a lot of time trying to debug things where I could but did not always have time to go back and embellish the writing as much as I would have liked. Then, many additional responsibilities entered my life, and I did my best to release the game as soon as I could. Thank you for your comments and suggestions. When my life eases up more, perhaps I will re-explore ChoiceScript and the possibilities with it in greater depth and create a game comparable to some of the novels I have released. As for now, I wish all of you well.