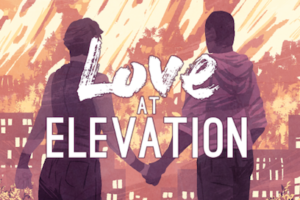 Romance is as easy as one, two…three lovers! Find love and ascend to new heights in your new home of Boulder, Colorado. It’s 33% off until November 15th!

Love at Elevation is a 325,000-word interactive romance novel by Steve Wingate. It’s entirely text-based, without graphics or sound effects, and fueled by the vast, unstoppable power of your imagination.

You’ve just escaped a toxic relationship and moved to Boulder: hippie mecca (and home of the University of Colorado) a mere forty minutes north of Denver, at the edge of the majestic Rocky Mountains’ Front Range. And while you want to take in everything your new town has to offer: the outdoors, hip cafes, politics, and New Age healing: looking for love is foremost in your mind.

Will you fall for the local activist? The trail-running athlete? Or the hippie healer? Or why not all three? Your ex, meanwhile, keeps wedging their way back into your life, even from a thousand miles away. Can you juggle all these lovers, or will you have to break a few hearts?

• Play as male, female, or non-binary; gay, straight, bi, ceterosexual, or pansexual.
• Find one lover, two, three, or get back with your ex.
• Navigate workplace drama and the difficulties of being the new person in a strange place.
• Discover yourself as you negotiate the ins and outs of Boulder’s social scene.
• Choose exclusivity or open relationships with your new partners.

Some find love in cold climate, but you’ll find Love at Elevation.

Steve Wingate developed this game using ChoiceScript, a simple programming language for writing multiple-choice interactive novels like these. Writing games with ChoiceScript is easy and fun, even for authors with no programming experience. Write your own game and Hosted Games will publish it for you, giving you a share of the revenue your game produces.

Should that last line say “love in a cold climate”? Or cold “climates”?

No pedant (me) likes to have typos pointed out

but we’ll make sure to fix it across platforms eventually…

So I’m trying to purchase this game from steam but it is under Choice of game as developer and when I tried to buy the game it doesn’t work? anyone else having the same problem?

Sends to HG for me.

I played on the omnibus app but it seems the relationship stats got stuck . The athlete got stuck at 54/46% and the two others never change at 30/70% no matter what I choose. Is it a bug?

Maybe. But bugs must be reported to support AT choiceofgames DOT com. Not on the forum, please.

well I liked the demo…so its a GO GO! Get Get!

Went with Ray first, he broke up with me because I’m apparently too sexual, too depressed to get into another relationship, ended up feeling like not fitting in Boulder, tried to get back to Ray but didn’t work out, I decided to leave Boulder in the end. Also didn’t end up with the ex. I chose the choices I think real life me will choose and it didn’t work well at all. I think I need to show romantic affection more and be more assertive. Now I feel a bit bummed out.

Back to the review of the game, I like how the charcters are flashed out and don’t just have only the good sides. Ray feels like he has a switch in him that I shouldn’t touch and I feel my ex a bit manipulative. The writing is good(I may have a vocabulary problem here) and my charcter’s emotions can be felt. I think I need to play more playthroughs first to form an opinion more than that but I’m happy with my purchase. If you want romance more complex and flashed out than Wayhaven Chronicles, this’s the game for you. Just be prepared to get your heart broken because they can and will do it to you, unlike other CoG and HG games that is.

Nothing sucks more than ending up with nobody in a dating sim.

I get neo-hippie and neo-punk… But wtf is “funky pizzazz”?

Anyway while sometimes it happens that I have to look up some expressions here and there, I still enjoy this game so far. It seems like a better dating sim than Gilded Rails imo.

I’m playing the demo and liking it so far, but I did want to mention that bisexuality has always included non-binary people.

It might also be nice in future dating sims to be able to choose something like “women and non-binary people” as an interest choice, not just “women and men”, as bisexuality is quite diverse. Right now, as far as I understand it, if you pick non-binary you can’t pick anyone else too.

Perhaps an easier way to do it would be to let us choose the gender of each ro as we meet them if we pick the bisexual option.

Anyway I’m liking it besides that so far!

Alternative: dont pick a sexuality at all for the mc, but have the ros (with a set sexuality) ask if the mc is interested.

My only worry is that would decrease the amount of choice the player has considerably. But I get the appeal of characters with set sexualities.

That’d be a discussion for its own thread. Like, what’s preferable:
Playersexual characters and the player can choose, or ros with set sexualities

Are there equal numbers of RO’s for each gender/sexuality combination? Are their gender’s locked or fluid depending on MC preference? Your idea seems good unless I’m going to get randomly-gendered RO options that I don’t want.

Anyways, I’m devouring this on my morning commute, lunchbreak, and sneaking peaks throughout the day.

I happily gots me some alternative medicine bumpin’.

I personally have some trouble getting through it, mainly because this game has things like: Should you hold hands? How do you dress? Hug or a kiss? How would you share your food? Ect. And I have zero social skills so I am completely lost

The game is fun though, the characters act like real people and they’re not as easy to predict as most RO’s. (You know, pick that option to raise their opinion because you know which one to pick) Not really having that in this game makes them more ‘real’.