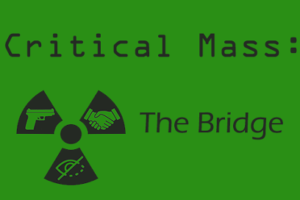 The world has ended in atomic flame. You are a lone warrior on your way to the mythic Crescent City – a center of civilization and even democracy and the degenerate wasteland. But to get there, you must first barter for the right to cross the Bridge. Will you collapse under the weight of mutant beasts and conniving wastelanders? Or will you prove your mettle and fulfill your mission? It’s 33% off until November 29th!

Critical Mass: The Bridge is a post-apocalyptic 160,000 word interactive novel by Michael Meillarec, and an entrant in the Choice of Games writing contest, where your choices control the story. It’s entirely text-based—without graphics or sound effects—and fueled by the vast, unstoppable power of your imagination.

• Play as male, female, or non-binary
• Determine the fate of three factions and at least one gator.
• Find love in the time of radiation sickness.
• Balance the needs of the wasteland community, or conquer it instead.
• Liberate slaves or rule over them as their master.
• Use honor or deception to achieve your goals, no matter how small.

Michael Meillarec developed this game using ChoiceScript, a simple programming language for writing multiple-choice interactive novels like these. Writing games with ChoiceScript is easy and fun, even for authors with no programming experience. Write your own game and Hosted Games will publish it for you, giving you a share of the revenue your game produces.

Will this game come out on Steam?

Congrats on getting this published Michael. I did not review your story in its WiP stage at all, so I am pleasantly surprised today.

(Is the author a community member?)

Oh I thought the title and premise seemed somewhat familiar (thought it was deja vu at first lol); excited to see the full release of this game! Shame it’s not on Steam though.

@Eiwynn The author had a topic for beta testing here

For bug report, better sent it through the support email. Majority of the CoG staff don’t frequent the forums since forums are more for beta testing and discussions.

" Second, Critical Mass: The Bridge is out now for Steam, Android, and on iOS in the Hosted Games Omnibus app. It’s 33% off until November 29th."

@resuri08 Alright, will do. Thanks!

@Joshwah Hm, probably an oversight on their part? Or maybe it will come to Steam at a later point.

So is there going to be a Steam version for this game? I thought it was pretty interesting and the e-mail said there’d be one, but I’m still not seeing it on the Steam store.