Hey Guys!
I’m working on something that will hopefully one day amount to something.
It’s called Nastera: A New Age
Currently it’s in some what of a concept phase, but as it stands the PC will travel this continent stopping new threats to the world, and deal with politics of a returning power source.

At the moment only the introduction is done, which is essentially a character creation process. My goal with it was to find a natural way of the PC to use its name, gender, race, and additional stats. I also wanted to focus on getting the Npc’s to be random, and at the moment I’m in a happy place with them. Everything about them at the moment that’s random is displayed in the first scene.
Currently this is only a side project of mine and I as such will not have REGULAR updates. However I do plan on updating it, but Life.

Last note to add, loading the first scene may take a moment as it generates characters. I do plan on staggering it at a later update.

This is what I got so far, Enjoy.

I was super confused during the last part of the game.

Is the section with lifting weights and running for class president supposed to be in the demo? 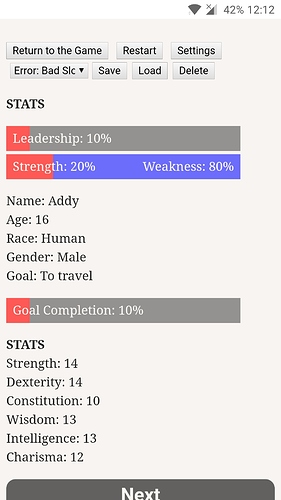 I know I’d prefer it if I saw all the numbers and then assigned stats to them, rather than getting one number at a time and choosing which stat it goes to.

Pretty sure that part’s from the ChoiceScript demo/practice stuff.

coffee went out of my nose when I read your comment.

Would it not be best if we assign stats like @stsword said?.
Also I’d love to play as a bard and sing my way to victory…

Pretty sure that part’s from the ChoiceScript demo/practice stuff.

No offense but wtf did I just read

no sorry
i forgot to scrub the example script

It seems to freeze if you set your race to Halfling. No error popup, the game just stops responding. Maybe check for loops?

This topic was automatically closed 60 days after the last reply. If you want to reopen your WiP, contact the @moderators.