It would be strange to get used to, but not a bad idea, I think. I would suggest pale colors for off topic and general, warm colors for works in progress, cool colors for everything else.

I’m not sure the system this forum is built on even supports changing the category colors. It’s definitely doable from what I know of web design, but again I don’t know if the exact system has that feature.

@codinghorror wrote Discourse, which is our forum software. He’s definitely right that we can change up the color scheme for categories.

I’m sure I already suggested this (or perhaps saw it suggested by someone else) - needless to say, I’m definitely in favour.

I’d like something like this too, makes it even easier to tell what the category is at a glance.

Different colors is always nice, easier to pick things apart and it looks better in my opinion

We both have. Some of us repeatedly. :-p

Hm, a quick mockup. It’s a little, ah, @codinghorror what did you call it before? Clown vomit? I like the way that sounds. Hope you don’t mind that I took some pointers from the Discourse Meta.

Anyways theming was mostly help/wip/non-cog got blue/green, while CoG related got red/orange. Probably too bright at the moment. Oh, and the CoG Games as black is mostly a function of allowing the other games to be tucked under it and have a wider range of colors. 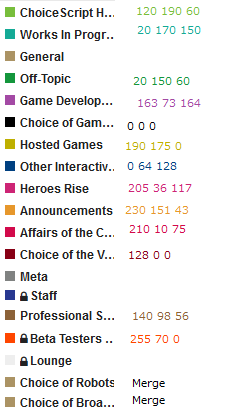 I can see what codinghorror meant by skittles. Not a bad idea for coloring. Although keeping all hosted games and such under the same banner of a color couldn’t hurt.

A couple of comments on your choice selections.

Why not bright red for announcements?

Otherwise I’m not sure I mind what colour what things are.

Maybe it would make sense to make off-topic and other interactive fiction the same colour, as well? I just know I’ll never remember which colours are what, when there are so many shades.

@FairyGodfeather I’m guessing the red for announcements is partly a joke, but either way I like having the CoG orange there. It’s a nice vibrant color on the red end, without actually being red, so it’s eye catching without being eye searing, and gives a degree of uniformity. As for making the colors the same for all the CoG catagories, there’s a better option, just make them all as sub categories under the CoG cat. I’ve, uh, taken the liberty of assuming a certain amount of reorganization in my follow up (below). 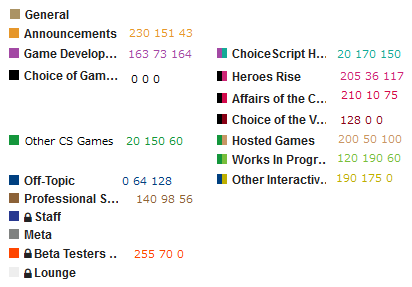 This is mostly on the cooler end of the scale to help prevent ‘taste the rainbow syndrome’, but I have a third set half done that’s significantly brighter for a more ‘yah yah cheery cheery’ feel.

Do Orange for the Choice of Games games, since that is the company colour.

I am very much in favour of any purple/blue combinations, particularly the choicescript help one.

Well then I took it seriously :-p

Here’s a set with orange as toe CoG games cat color, that is, in general, far more high intensity. 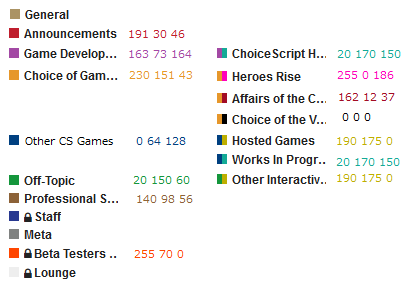 I also swapped around the Other ChoiceScript Games and Off-Topic colors too for another alternative. In both cases I find the first set preferable. Orange is a hard color to get to compliment other things. On the other hand, while I did list the three CoG games cats as reds at first, could just as easily turn the Heroes Rise color into a blue, and the AotC one into a much lighter red for more diversity. But no matter what I do, that orange ends up looking halloweeny against everything else to me. But maybe that’s just me IDK.

As for General being dull, eh, very few things belong in general, and of those that have some degree of belonging in general even they can usually be sorted into something more precise.

I don’t mind the tan or if they change to being coloured as long as it doesn’t become an eye sore. Maybe rainbow from top to bottom instead of categorising by what colour means what. Or you can move the categories around to suit the preferred colour scheme. That way the blocks of colours are together.

Any decisions here? Colors still pretty drab! I recommend at least a few colors for “different” stuff. But don’t go too rainbow-crazy.

So, everyone like the new colors? It also involved a bit of category rearrangement.

Therefore, I am okay with this change.

So, everyone like the new colors? It also involved a bit of category rearrangement.

Oh, good, there was an actual change. I had been wondering if I’d lost my grip on reality

Now that I know this, yes, I like it

It is especially helpful on mobile. The desktop version looks much more cheerful and organised, and less muddy, as well. Thank you for sorting the colours!

Okay, changed the CoG group to the site orange since black didn’t work with the new dark color scheme.

Did a quick one, need to tweak (and should probably rename them.) The site icon is an image, so I have to take a moment to figure out how/if I should invert it, hence why the bar at the top is grey and not black. Oh and please @ me if anything is unreadable, since it was when I first implemented it, and IDK where all the colors are used.