Keeper of the Sun and Moon (Discussion)

Which one is the cunning boost?

Which one is the cunning boost?

Just pick cunning as that massive stat boost at the beginning of the first game and then forget about it; it’ll rise on its own and you’ll get the secrets

Perhaps in my cunning playthrough, my canon Keeper don’t like politics too much.

Here’s a guide to choices that boost cunning.

Hi there! I know you've mentioned in the past that... - keeperofthesunandmoon

Yep, that’s how I managed to get most of those secrets.

Hello everyone, I’m trying to get the max of stats possible in the first book, and if anyone could tell how access the game code, i would like it, if the code isn’t available for everyone, it’s ok too, it just going to take more time XD

As for Steam purchases, you only need to link your account to the CoG website upon restore purchase.

I hope I’m not necroing an old conversation. I’m trying to do the Katie romance but I must be missing something cuz every time I’ve gotten to the library it doesn’t bring up the option to ask if she’s dating anyone.

Hi! Sorry to bother you. I can’t seem to get the... - keeperofthesunandmoon

Maybe this will help? 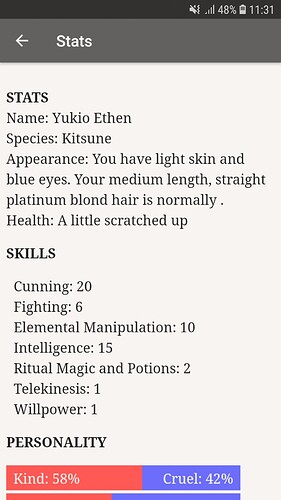 What are the best options to choose for giselas approval rating? I feel so close, but there’s like, only one option I’m missing to get her to 70%

I don’t think you can actually get it to 70% in book 1. You can get somewhat close to it though (then again I never really tried that hard to get Gisela’s approval). I assume you already have logical and cynical MC that doesn’t harm Katia and also help the Nymphs to train already?
Certain species also gets more bonus with her (Kitsune iirc).

She seems a little inconsistent. She likes it whenever I’m nice to the nymphs and when I answer “hope” at the party, but also likes it when I shut the duelist tournament conversation down and just call it stupid (which Katia doesn’t like, which is odd that she’d like something that visibly upset katia)

It makes her better as a character imo. Rather than the mindless follower/simp/guardian stereotype, she still has her own values and individuality. She has always been shown to be consistently cynical though(she also loves dark humour, the opposite of Katia).

How is answering “hope” cynical? She’s also optimistic if you’re a magician. She also snaps at katia and seraphina when they’re rude, but at other times applauds your rudeness

Uh… we’re the ones(or rather MC)that answer “hope” not her. Besides being cynical doesn’t mean you don’t value “positive” things, you’re just sceptical about it. Also she snaps at them because of different reason(she doesn’t really care about decorum).

She snaps at seraphina when being rude to marcela, I didn’t see what other reason there was. I know we answer with hope, but she likes it and her relationship percentage improves

She snaps at seraphina when being rude to marcela

Gisela is protective, she doesn’t snap because someone is neglecting decorum, but because she cares about the person. Do Katia and Yakov route you’ll understand.

but she likes it and her relationship percentage improves

And that is not weird. If you think someone’s action is not making sense/inconsistent or you don’t understand something in general, try to set your preconception aside first and then re-evaluate and piece the puzzle in their past action so that it make sense . Just an advice to not get trapped in a misconception.

Does anyone know how to boost the intelligence stat besides picking the “you were a scholar” option? I wanna be big brain so I can have better grades

also, which option is the one to have both parents alive? I know the fake parents are the aunt and uncle, and in that one the parents die, but i forgot if/which option allowed for our real parents to be alive

The one with the single mom option is the one you should choose.