I’ve never seen this before so I’m guessing it’s not possible in choicescript?

Within the confines of code, pretty much anything is possible. To accomplish what you’re asking about would require you to directly alter–expand in this case–the “style” info programmed into the basis of choice script.

I don’t know what goes into that sort of thing with any specifics, but it should be reasonably possible.

Do you mean edit the choicescript code itself? Or using *script? Because I don’t really see how to do this using *script, as there aren’t html tags for individual chunks of text (maybe with like… convoluted hacks).

I actually do have a fork of the CS repo on github, but it makes publishing via hosted games or even dashingdon not really possible. At that point I’m not sure if there’s any reason to use CS over Twine or another open source engine. Or probably I’ll just abandon this idea.

but this means no homestuck fangames in choicescript

but it makes publishing via hosted games or even dashingdon not really possible.

Publishing through the house with an edited css is an a ok, although you might want to discuss it with CoG (preferably Dan) if you intend to do it with modified CS. On the other hand, it’s possible to host a game compiled by modded CS on dashingdon: just use the “upload as HTML” option when uploading.

But yes, right now, no way to apply separate font-styles, although I imagine it should be easy to create a modded CS that accommodates it.

I have tested it and I happy to say that it worked. Unfortunately, I asked CoG support if such a modification will void publication, they answered that it will. However, they have said that they are working on tweaking the image gaps in a future update.

The above makes it sound like modified CSS is not OK.
Best we don’t try to make any such statements (for or against) and just direct people to CoG staff/support.

There’s always going to be differences and potential exceptions, but it’s not the community’s place to advise on such.

The best I can suggest is by using text generators.

Here’s a dashingdon link to test for text-to-speech.

Interesting. Did you just copy and past the text from the text generators straight into the CSIDE app?

Yes, I did. I haven’t tried it on CSIDE but it should still work since it still reads it as a normal text.

Does that work OK with screen readers?

That, I can’t say for certain.

EDIT: I tested it out on mobile and it works. Here’s a dashingdon link.

Ooh. Cool! Thanks for testing it out!

This is pretty cool. These seem to be mathematical symbols in unicode.

This still doesn’t allow for text with different colors though, which I guess would require hacking choicescript…

Just a heads up, sometimes, texts with a different font shows up as boxes in some devices (including my phone, lol). 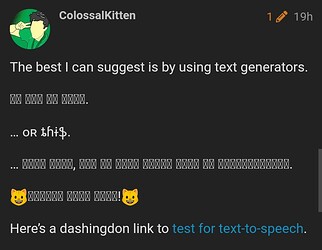 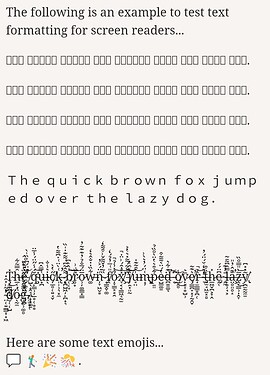 this looks interesting, Thanks!