I’m not sure the beliefs themselves matter as much as the consequences of how they effect the relationships you can have with the various NPCs around the MC.

Believing in the old faith of the world’s native inhabitants could make getting along with your new family and their associates easier, but then again you may have trouble with the dominant invaders who colonized, and introduced their own belief system making it potentially easier to get along with those characters if you instead shared theirs.

Believing in neither, while an option, seems to have nothing but negative consequences in terms of relationships, but that’s my canon route out of hand. I am curious about what you can do with these three different ways of going about religion from a narrative standpoint, but that’s all secondary to the core of the plot. Flavor text, and relationship shifts, but nothing world-shaking I imagine.

Also, let me use this opportunity for a quick update! Life has, unfortunately, continued to be incredibly hectic, which has eaten into my writing time. However, I’ve finished Chapter 8 and am partway through Chapter 9. I hope to post both in the coming weeks. After that, the remaining chapters will be a race to the climax!

Heavens’ Revolution is on Steam! You can now add it to your wishlists (and see a bit of the gorgeous art by Darya Bajestani)!

I added it yesterday. That cover art is absolutely gorgeous!

Right?? I’m so happy with how it turned out. And thank you!!

Yes. The cover art is beautiful, one of the most beautiful I’ve seen! Really excited for this game

Aw, thanks! For those interested, I’ve attached the full cover art here as well. 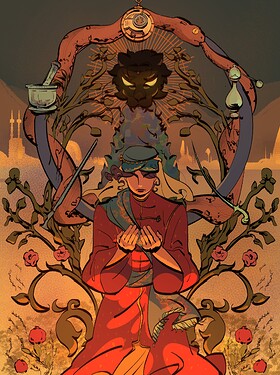 Hello! I finished playing the demo yesterday and I absolutely LOVED it! Also coming from an Asian background (Chinese in this case) I really felt the whole loneliness and then relief with the new family in Farhad & Mahasti.
Feedback regarding the clothing: I wasnt sure how to picture the different types of headwear, I understand IRL there are different types of headwear based on region/religion, so I wasnt sure how to picture them based on what I know (which is rather limited). Perhaps describing how they look like and are worn, either in game or in the glossary, would be good. Same goes for the clothing!
Thanks! Looking forward to the next update!

I’m so glad to hear you liked it and that it resonated with your own experience! And that’s a great note on the clothing/headwear, thank you!

Progress on the latest chapters has been slow (first I was at Worldcon, and now I’ve caught Covid), but I still hope to post them soon. They add about 50K words combined, so hopefully that will tide folks over as I wrap up the rest!

Please take care of yourself and feel better soon!

Thank you so much! My fever finally broke, so I’m hoping the worst is past!

I enjoyed the demo and it seems well put together

What is Haleh’s char description again?

Haleh’s the daughter of the satrap. She’s interested in poetry and revolution, and she’s a potential love interest.

To that point, I was thinking about adding a characters section to the glossary/stats pages for reference, given how many there are to track. Would folks find that useful?

Just one playthrough in and I’m loving this already! There’s a lot of details about the setting to immerse the reader, but not in a way that interrupts the story to a screeching halt. (At least not to me.) The characters are also great and feel fleshed out, and I especially enjoyed the dynamic with Farhad, Mahasti, and Alaleh. They feel like a real family in their bond with each other and the friendly ribbing.

I also like the use of oun/esh pronouns, and small things like the Bazaari woman wearing kolah (I played as a woman wearing dulband). I thought it was interesting that she pronouns are used for Marizad, but She’ri culture itself used to be more patriarchal before the current padeshah.

I’m not Iranian myself, but I personally don’t mind there being a lot of Farsi words in the text. If I’m confused I can just google. And I understood some cultural references like the devotions being an analogue to salat. But I do agree with @gchiang, some notes on clothing items would be great for those who are not familiar with the culture.

To that point, I was thinking about adding a characters section to the glossary/stats pages for reference, given how many there are to track. Would folks find that useful?

I would suggest adding more entries for characters that have a relationship with the MC (like Navid and your parents, Farhad and his family), as well as the major factions and maybe some of the important details about the two religions. There are a lot of terms, so I think the glossary will benefit from having separate sections for characters, factions, concepts like religion and other vocab words of note.

Anyway, I look forward to the next update, and I hope you get well soon.

This is all excellent feedback. Thank you so much! (Still on the mend, but I’m hoping this week will be the last of it.)

I’ll definitely be keeping an eye out on this thread, I liked what I saw of the demo, even if my brain hurt from trying to remember what all the terms meant

I’m so glad you liked it!

And noted on the terms. Just for my own edification, how often did you find yourself referencing the glossary? (I’m in the process of scaling back some of the terms. The last thing I want is for them to affect playability.)

A bunch of times when the game started but not really much then after that, I practically read fantasy for a living, unfamiliar terms are kind of a thing with that so I got used to it pretty quickly

Good to know. Thank you!

That sounds AWESOME. Best of luck with the writing!