I appreciate the feedback! I do think there’s an opportunity for me to make the meaning of these words clearer through context, but I’m reluctant to italicize just the Farsi, as this can create a sense of otherness around these words.

This game was really fun and well-written! The setting was fascinating, as well as the plotline. I especially liked the character interactions! However, there was an issue with saves. Apparently, I can’t save my progress-whenever I try to, it just says that it’s a bad slot.

I’m so glad you liked it! I’m sorry the save function didn’t work for you. I’ll look into it tomorrow!

make the meaning of these words clearer through context

Which means you’re going to write 20 words instead of a single turban?

Okay, the save function should be working again!

If those twenty words make for a more accurate and immersive experience, then yes. The dulband of my world isn’t exactly the same as a turban, nor is the rusari exactly the same as a hijab. I chose these words deliberately. I want players to imagine a world they’ve never seen before, and I’m drawing specifically on Safavid- and Qajar-era Iran, so I’d rather not use words that might conjure pre-conceived images of a generic West or South Asian setting.

(To be clear, there’s nothing at all wrong with the word turban, but it’s not the word I want to use here.) 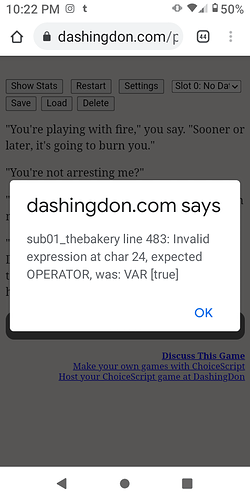 Whoops! Sorry about that. Should be fixed now.

Looks like you hit the same bug as @K_T. Should be fixed now!

This was a great read, I love your writing style! I find the character interactions really dynamic, especially the family ones.

Oh my goodness! I’m so glad you enjoyed it!

So. First, gotta say that I love, love love where this is going. Persian science for the win.

I did feel, though, that when I tried to squeeze more dinars out of Sahar, that shouldn’t have pushed my allegiance revolutionaryward - or maybe not as much as wholeheartedly giving myself to the Legion’s cause. It felt like a much more mercenary choice than it did picking a side.

Thank you so much for reading! And for the feedback.

I’m currently putting the finishing touches on the next two chapters (life has been incredibly busy) and also addressing a number of issues with the previous chapters. That particular choice is actually at the top of my list!

I’m really enjoying this game! However, I got stuck at the page where I was going to the Bazaar and had to decide if I would pop in on my aunt and uncle, whether I didn’t need help and money, and whether I didn’t want to be late for my meeting. It just never stopped loading. But I love the plot and characters a lot!

The update has broken the save system. The save slots say Error: Bad Slot - Has smPlugin been included?

Whoops! Good catch. It was still commented out. Should be working now, but let me know if you run into any other issues.

I’m embarrassed to admit that this was because I failed to upload the kebab shop sub scene file. It should be working now! So glad you’re enjoying it!