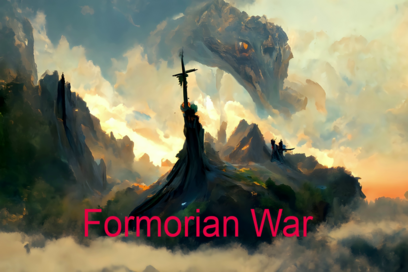 Choose your family, fulfill an age old prophecy and join forces with magical beings.It’s 33% off until 9/22!

Formorian War is a 35,000-word interactive novel by Liam Parker. Set in the fictional kingdom of Albion. It’s entirely text-based, without graphics or sound effects, and fueled by the vast, unstoppable power of your imagination.

In a time of magic and mayhem, join forces with your enemies and deal with other hostiles to save the Kingdom.

Liam developed this game using ChoiceScript, a simple programming language for writing multiple-choice interactive novels like these. Writing games with ChoiceScript is easy and fun, even for authors with no programming experience. Write your own game and Hosted Games will publish it for you, giving you a share of the revenue your game produces.

Hey those pictures are taken from the King Arthur The Role-playing Wargame. Nice to see that someone else knows about the series

does it come to Steam in the future as well?

Based on the lack of a Steam icon in the Upcoming Releases list, no, they’re not planning to release it on Steam. If it sold tremendously well, it could theoretically get a release on Steam someday in the future, but that very rarely happens.

that’s a shame, really. I hope a lot of people will buy it

Did you provide them with the artist’s name? Right now there’s just a placeholder in the credits.

The premise of this is really intriguing! Yeah, the word count might be a bit lower than some other projects, but 35,000 is still quite a lot if you think about it. And it might be nice to have a story that isn’t as large as a time commitment as well!

Hey, the game is full of bugs

MC gender keeps flipping, it wouldn’t bother me but in the first romantic choice with Morgana the choice is unavailable because my MC is female lol

it would be better to say that in the game description, it was very disappointing 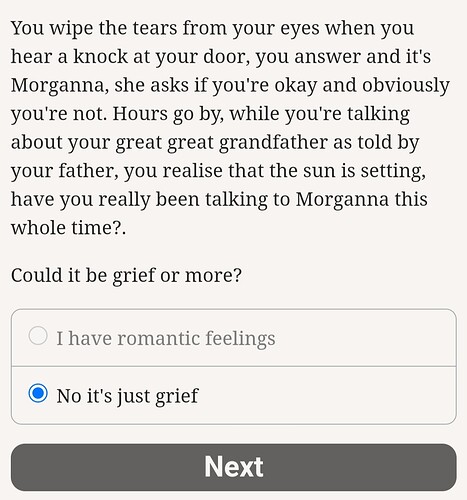 I really like the blending of old stories and legends here. It’s very straightforward and moves at a brisk pace.
I died before the adventure even began on my first playthrough lol. Now on my second I’m not finished with it yet, but I’ve gotta say, The Huntress is full of surprises!

The scene where the druids call you to their isle repeats itself twice. The repeating scenes seem to happen randomly throughout the entire book

Oh! That happened to me with the dice game scene, but when I went back to check it, it didn’t repeat, so I thought I’d just misread it.

I have completed my review of Formorian War. Thanks for reading!

Formorian War By Liam Parker "Dagonet: Calm down everyone, Danna what’s the situation? Danna: It’s bad Dagonet: How bad?" So, I’m going to talk a little bit about what I understand about one of the basic differences between Hosted Games and Choice of Games. Hosted Games offer more flexibility in what you can write, like a protagonist with set gender, while Choice of Games titles require that you meet certain standards and requirements, essentially a bit like approved sponsored content for …

I have to admit, I found the narration - and especially the dialogues’ presentation - rather rough around the edge. Seeing stuff like ‘Soldier 1’ speaking makes it hard to really immerse yourself in the story, and then there are weird choices here and there (what the hell is a ‘PM’?)

Couldn’t help but chuckle when I saw that the action was taking place in the mythical land of… France, apparently (and I know it’s unfair, I’ve seen plenty of people do the same with a map of England and just switching every name)

I think PM is Prime Minister

No he said at the beginning of chapter 1, PM is the Possessed Man.

This is so bad.
The punctuation is so lacking you’ll need to read a sentence multiple times to make sense of it. The numbers are left as “2, 3,…” and never written properly. I felt insulted when I discovered that the dialogue is in the form of a script.

The author even left author notes in the text like it’s a completely normal thing to do (it’s not).

It’s clear that there was some effort put in, but there was no editing done whatsoever. I don’t know what possessed anyone involved to make this game public as it is.

While putting together a full game takes a certain dedication, this one’s a swing and a miss; big time.

The writing is just sub-par, and that’s being gentle. Maybe English isn’t the author’s first language, but to call this a “finished product” just doesn’t work. First of all, the author has no style consistency. Dialogue is written like a transcript (not a movie script), yet includes many examples of “tell” where “show” should be used, even if they used consistent prose formatting.

There’s also the matter of “PM”. The possessed man, titled in dialogue as “PM”, is abbreviated as such due to an author’s note; this isn’t something that should be done in written media. Yes, some screenplays do utilize similar “author’s notes” at times, but this isn’t a screenplay. Screenplays are meant to be the framework for the finished product; they are not in themselves the final product.

Then there’s the actual body of writing. Walls of text. Proper capitalization is nonexistent in places, as is good use of grammar. Dialogue is flat and lacks character, and is so on the nose at times it’s punching you in the nose. Timing is all over the shop, with absolutely no clear indications of the scene transitioning at times.

The whole thing reads like a fifth-grader’s work, and a first draft at that. Definitely not something worthy of release, let alone release to the masses.