Exile of the Gods -- Wield the chains of destiny, or shatter them? 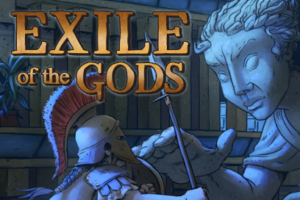 We’re proud to announce that Exile of the Gods, the latest in our popular “Choice of Games” line of multiple-choice interactive-fiction games, is now available for Steam, Android, and on iOS in the Choice of Games Omnibus app. It’s 30% off until July 18th!

In the great war between the gods, will you wield the chains of destiny, or shatter them forever?

Exile of the Gods is a 460,000 word interactive epic fantasy novel by Jonathan Valuckas, where your choices control the story. It’s entirely text-based—without graphics or sound effects—and fueled by the vast, unstoppable power of your imagination.

Our story begins twenty years after the action of the first game, 2015’s Champion of the Gods. Which ending did you get? Start this game as the Champion, a warrior born to serve the gods, and follow the holy destiny the Weavers have crafted for you. Or start this game as the Exile, enemy of the gods, and forge a new life for yourself in the faraway land of Khovros–where mortals are free to choose their own fates.

Champion and Exile alike must unravel a deadly conspiracy, and confront the brewing war upon their gods. Will you vanquish this invading force, or use its power to free your realm from its ruthless creators forever? Take revenge on the gods who exiled you, or steal this chance to prove your worth to the pantheon, and seize your destiny of glory?

• Play as male, female, or nonbinary; gay, straight, bi, or ace
• Take the role of your realm’s beloved savior, or that of a vengeful warrior living in exile
• Explore a world inspired by the myths of Ancient Greece
• Fight land and sea battles inspired by the military campaigns of antiquity
• Unravel a divine conspiracy that spans two realms, complete with shocking twists
• Use the power of Inspiration to endow your companions with unearthly prowess, or wield Rapture to stun your enemies with bliss
• Move the hearts of your foes with your sincerity, or harness the power of deception to spin a lie that suits your fancy
• Play the game in standalone mode, or import your skills and backstory from “Champion of the Gods” to unlock new storylines–and a terrifying bonus power
• Confront golems, fire-wielding mystics, and the armies of the dead
• Receive a horoscope for your character, based on their virtues and humors

We hope you enjoy playing Exile of the Gods. We encourage you to tell your friends about it, and recommend the game on Facebook, Twitter, Tumblr, and other sites. Don’t forget: our initial download rate determines our ranking on the App Store. The more times you download in the first week, the better our games will rank.

Steam Community :: futaba-tian :: Review for Exile of the Gods

So, if Google Play does not lie, the first part of this epic saga – Champion of the Gods - was released in 2015. And I have been desperately waiting for the second part of the story since then – or at least hoping that there will be one. Now imagine...

I hope my review on Steam will help promoting the game

I really like both parts and it was a lot of fun to return to my beloved Agossa!

But just a small grain of salt: personally, I think that the Champion of the Gods was stronger story-wise and as far as romance is concerned.
At the same time, the writing is impeccable as always, as well as the lore.

P.S. My final stats for the first playthrough:

I just bought in on the omnibus app but then noticed the steam version was cheaper. Did the 30% discount only apply to Steam?

The 30% also applied to the iOS omnibus app. Steam was 10 cents cheaper but I think tax may be different? There was a post in the past about the slightly differing prices 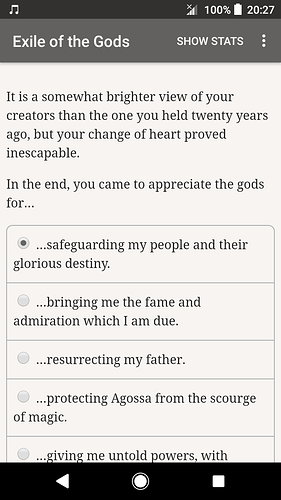 As enjoyable as the first game, I’m already looking forward to the next one!

Also, glad to see that Daggoras and I still make an awesome team! I do hope I’ll get to see my true patron again…

I just bought in on the omnibus app but then noticed the steam version was cheaper. Did the 30% discount only apply to Steam?

It’s possible that the regional pricing for Steam is cheaper compare to Google Play pricing or iOS pricing, this is based from personal observation. For example, Steam pricing for me for this title cost $3.01 but in Playstore, it cost $5.18.

Does Exile of the Gods have a save point at the end?

No, it currently doesn’t.

Whenever I play a standalone save, I’m always cast as female. I don’t get to choose my gender. Why is this?

You do get to choose your gender when you choose the gender of the city’s patron. 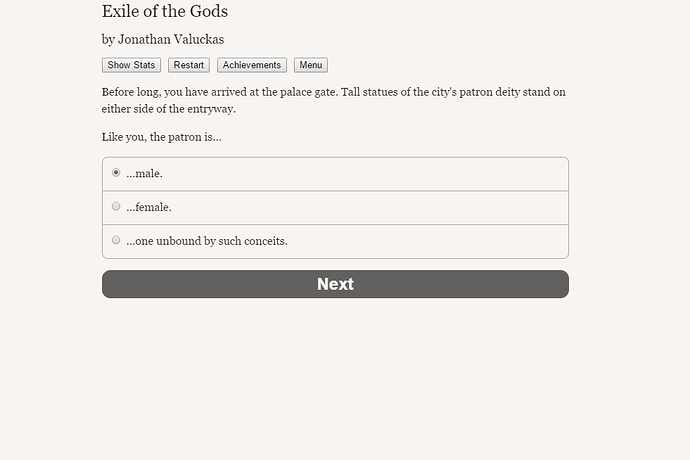 Replaying the first game to have different endings saved for this one and now I wonder, is it possible to end it romancing the princess if MC joins forces with Daggoras?

Blurred just in case… I was about to marry Prince Travan when Cephiel took me to the Weavers’ cave…there, I joined Daggoras and let’s just say that the wedding never took place, afterwards :D. Then in the second game, when I met Travan again, he was married to Kionus.

What are the RO’s for this one?

Meh, this game is alright, but not as good as the first one. I mean, all of the sides are bad. The clerics are arseholes, the “gods” (I assume they are just sorcerors who consolidated power, but i dunno, havent gotten halfway through yet) are dipshits, and the final option i’ve seen is just being a bigger one to both sides. Now, i havent finished the game yet, but this and how it deleted 30% of my farmed strength stat that i sacrificed the perfect playthrough for just annoys me to no end. When you have both 85% speed and 83% strength just to have one fall back to a dumb 60% its just sad. Also, what happened to that special power for imported games? Did i miss that somewhere?

Didn’t enjoy the game as much as I thought I would have.
Every time I played I kept getting to the end and it kept saying “You didn’t reach the end of your pathway”.
Like wtf? What “pathway” was I on?
And I played through both games a fair few times to try to get a different result but constantly my stats were dropped and no choice I made related in any way, shape or form to the story. all of it felt extremely railroaded.

I feel kinda shy that I enjoyed it when people found it lack luster. Personally the first one was better, but this one is pretty good too. I just finished my first play through with my exiled character. I’m currently playing my second play through with one of the pre made characters… the General one.

I’m just confused with as to why Tanis calls me mother? Is she my daughter? 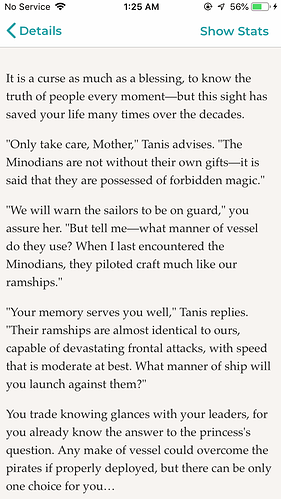 Dont be. Our opinions are just that, and are inherently as worth as much as 1/100th of a penny due to inflation. Seriously though, the only thing im truly mad about is that it took stats from my character after i sacrificed many of the beginning games victories to farm 2 stats to 80%, specifcally so that i could level up my resilience to 80% as well and be thoroughly stacked for the third entry. Oh well, a few hours (only 5) of powergaming trying to find the perfect combo of choices to create a super saiyan was worth the feeling of euphoria when i finished the perfect save, even if it didnt transfer. Ill wait for news of a third game before restarting the journey anew.

Tanis is your heir. So yes, she’s your daughter.