There is only one thing in this world I love…

Why is my bond droping so much it down to 34

Becuase you’re not syncing up with your dragon. Your actions influence your bond, and if you have a low bond it means you took actions your dragon didn’t agree with or you tried to make him good when he was evil or vice versa.

To get a high bond just take a dragon that reflects your character.

Until he tries to kill a little girl. Plus I imagine the “evil” aspect will further flourish as the story progresses

One thing that i love about this game that made it the best for me is the bond you have with your dragon and your team. Seriously, the whole story is filled with life. Your bond with your dragon is really well made mostly when you pick your dragon based on your irl personality like i did. Bonding with your characters as you fly besides each other feels so real and magical.

Some people might not like it, but i love how just because you have a high stat doesn’t mean you already succeeded at the stat check. You are taught and trained how to win not through choices that boosts your stats, but remembering and following the advices and lessons they taught you. The most important thing about the competitions that i think is very well written is that it’s not YOU AND YOUR STAT vs everybody else. but it’s YOU, YOUR TEAM, AND DRAGON vs them. If you can’t coordinate with them by not remebering the lessons or cooperating with others, then expect not to get a good outcome from it, which is just like irl.

So far i have noting but praises for this game, and now am really stoked for the sequel.

He doesn’t try to kill a little girl, he’s not dumb enough to try doing that. He tells you not to put her on his back, if you still decide to even after his obvious warning then he’ll snap at her to scare her off.

Pffff, haha, are you kidding me friend? Even if you take the most vile, evil dragon in the game he’ll still love Jack and be tusnder as hell about Jack hugging on him.

“Don’t put these damn doe eye’d kids on me”

That’s the extent of the “evil” dragon.

then he’ll snap at her to scare her off.

That’s not what it told me. In my playthrough it specifically stated that the only way the child survives is because you react fast enough to remove her. The story goes so fast as to say that the girl wasn’t even aware she was in danger and wanted to get back on the dragon.

I’m not sure what happens if your not fast enough or your bond isn’t high enough, but for those where it is, it’s clearly stated that Red Dragons try to kill the girl and you are the one to save her.

love Jack and be tusnder as hell about Jack hugging on him.

There is no scenario where a dragon hurts a child, it’s just implied as a repeating joke from when you first meet Jack to “Don’t put these damn doe eye’d kids on me”. Like I said before. If you DON’T put the kid on him he makes a even bigger joke out of it in that particular scene and plays sick. Grumpy, not evil.

Oh gotta remember my spoilers, not everyone has combed through this book as much as me.

Heck I’ll do you one better, I’ll screencap the exact scene when I realized “Evil” was just “Grumpy”.

This was not the scene I was talking about. I already said that

I know the scene you are talking about, I’m just saying it’s a reoccurring joke from when you meet jack, the dragon was never going to hurt a kid.

I know the scene you are talking about, I’m just saying it’s a reoccurring joke from when you meet jack, the dragon was never going to hurt a kid.

I didn’t see it as a recurring joke at all? The black dragon’s first encounter with Jack was to spit acid at him which wasn’t framed as a joke in the slightest given Jack’s response.

I like the evil dragons since they contrast well with my MC but to call them grumpy oafs is an incredible understatement.

Your dragons reaction to jack is based on how you feel about it. If he’s evil and you like the kid you get a “This stupid kid is gonna make me cry.” scene. But there isn’t any way where you get an outcome where a dragon legit hurts a kid

I just went back to check and the only choice relating to Jack before the black dragon makes an attempt is to hug or ignore him, both of which lead to the same scene. Are you sure you’re not mixing up the scene where you leave with first meeting him?

Not mixing it up, I’m specifically talking about the scene where you head off to be a Dragon Rider and say goodbye to Jack. The repeating joke is “Kids love dragons” Its a very minor bit that repeats a couple times where they want a ride or a hug

He wouldn’t make an attempt in that scene because it’s a sentimental moment. It’s certainly not a joke when both times it happens it puts the kids involved in harm’s way, the second time much more serious than the first given that he literally tells you not to let her ride him. Neither are minor “bits”, they’re there to show how cruel and unpreditctable your dragon is.

We’re just going to have to agree to disagree on how much weight you’re putting on these scenes becuase they involve children, considering there is no possible way any of them end in tragedy. 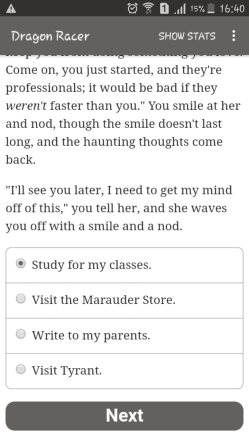 what should i choose??

Writing your parents gives some touching letters but that’s it, studying gives a knowledge boost that won’t change much, and you can visit the store again soon after anyway, so hanging with your dragon is technically the best choice there.

I was actually hoping there was a way to send enough money home or really ANY way you could get your father up and about enough to come see your first real race as a professional rider but it doesn’t seem to be possible.