Cliffhanger: Challenger of Tomorrow—Punch Fascists in the retro-futuristic 1930s! 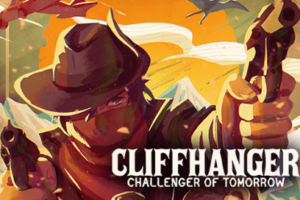 We’re proud to announce that Cliffhanger: Challenger of Tomorrow, the latest in our popular “Choice of Games” line of multiple-choice interactive-fiction games, is now available for Steam, Android, and on iOS in the “Choice of Games” app.

Punch out Fascists and unravel conspiracies in this explosive pulp adventure set in a retro-futuristic 1930s world of airships, fast cars, and two-fisted action!

Cliffhanger: Challenger of Tomorrow is a 300,000-word interactive novel by William Brown, author of The Mysteries of Baroque. It’s entirely text-based, without graphics or sound effects, and fueled by the vast, unstoppable power of your imagination.

And you? You’re Challenger, the most famous adventurer in the world–or, if you like, the most infamous scoundrel. You were raised as an orphan by Dr. Cosmos Zeta at his Tomorrow Institute, where he and his crack team of scientists have developed “zeta rays,” providing free energy for the whole world, and granting mysterious powers to a lucky few.

But now, Dr. Zeta has been assassinated before your very eyes, and replaced by a doppelganger, who accuses you of attempted murder. To clear your name and avenge Zeta’s death, you’ll have to chase the assassin around the world–and beyond!

Will you defend Earth against a sinister mastermind? Will you crush the axis of Fascism that rages across Europe? Will you uncover the shocking truth about the zeta rays?

There’s only one way to find out! Play Cliffhanger: Challenger of Tomorrow today!

• Play as male, female, or non-binary; gay, straight, or bi
• Protect the Earth from interstellar and extradimensional invaders!
• Find friendship, love, rivalry, and enmity among a colourful cast of stalwart heroes, brooding warrior princes, shy scholars, charming rogues, ruthless gangsters, enigmatic spies, inscrutable mystics, fast-talking reporters, and brilliant scientists!
• Travel across a huge, gloriously strange world, from the sky-high speakeasies of New York City to the whispering bamboo groves of Taiwan, from the dark streets of Fascist London to the raucous nightclubs and casinos of the Shanghai Bund!
• Blaze across the skies on a jetpack of your own invention, learn the secrets of invisibility and mind-reading, or swing from building to building using the incredible slingshot grappling hook!
• Conquer the Mansions of the Moon, the last great stronghold of a decadent empire, or attain enlightenment amongst the snowy peaks and ageless monasteries of Shangri-La!
• Build a network of spies, contacts, and allies across the world!
• Play guitar with Django Reinhardt and Duke Ellington, party with Texas Guinan and the Aga Khan, drink whiskey with Al Capone, swap ideas with Hedy Lamarr, and shoot Hitler in the face!

We hope you enjoy playing Cliffhanger: Challenger of Tomorrow. We encourage you to tell your friends about it, and recommend the game on Facebook, Twitter, Tumblr, and other sites. Don’t forget: our initial download rate determines our ranking on the App Store. The more times you download in the first week, the better our games will rank.

Nice… This a a very intriguing one. Congratulations on the release…

Congrats! I’ll be trying it out in a bit. I loved Mysteries of Baroque and hopefully this new CYOA can hold a candle to it.

This was great, wildly fun, very immersive, and unpredictable in the best way. I thoroughly enjoyed my first playthrough. As an experienced creator of Fascist-punching-themed choice games, I salute and congratulate the author!

Utterly fantastic. This really scratched an itch for a rollicking alternate history pulp adventure that I seem to be constantly looking for and rarely find.

Congrats on the release, William Brown.

This game gives me the same vibes that The Watchmen and Rocketeer do; well done!

I dont know how to recruit sonia or 44

I was one of the beta testers on this game, and in my opinion it’s the best COG release so far this year.

William Brown now takes his place alongside @Moochava, @Gower, and Kevin Gold as one of my favorite COG authors.

As an experienced creator of Fascist-punching-themed choice games, I salute and congratulate the author!

1930s games forever! Now we just have to start thinking about crossovers!

After reading these reviews, I’m sold.

Just finished it today. Here are my thoughts:

Elements that I didn’t enjoy as much:

Overall, I would recommend “Cliffhanger,” especially to those who love action and tons of MC-customization, and I’d rate it a 8/10.

I rather enjoyed this one. I just completed my first playthrough and the ending was immensely satisfying, though I’ll refrain from giving away too much.

World building was top notch as usual. That really is one of your major strengths. There were a few concepts I did feel were a bit underutilized however.

The Abyssinian Empire was fascinating, but I feel like we should have seen a little more. Maybe acquire immortality for ourselves. We live the life to qualify, after all.

The other thing I wish we saw more of was the Soviet Union. It had by far the most interesting worldbuilding but we never actually get to travel there. After the revolution in Illyria, I feel we should have been able to affect Soviet politics. Princess Sonia may wish to reclaim her throne, but there’s also the immortal Lenin. Lenin hated Stalin. he’d definitely want to undo some of his crimes. Trotskyists were mentioned in Germany as well. I feel like a Trotskyist/Leninist rebellion/coup would have been very interesting. Maybe we could turn him into a cyborg, or invigorate him with occult magic. This could also help determine the Union’s role in the war. Perhaps Lenin would fight against the other empires.

This one’s a lot of fun, but I had two quibbles with it.

The Good: great pulp atmosphere makes for a very entertaining read. Unlike most COG entries, this one really makes you feel larger-than-life; you can play just about any pulp hero archetype, a rough-and-tumble soldier of fortune, a magician in the mold of Mandrake, a scientific adventurer, etc. The world design is entertaining and genuinely funny in its over-the-top descriptions; the protagonist inhabits a pretty way-out world, even by pulp standards, but the author has great fun with the crazily fantastic setting.

The story is pretty interesting too, and while it moves to a fairly preset conclusion, I felt like I had a lot of choice in shaping the kind of tale being told.

The Bad: I had two quibbles with the story. The first is that the numbered statistics which define the protagonist should have been explained to me as a reader. For example, there’s one opposing pair of personality stats called “righteous/reprobate” and a second called “idealist/unscrupulous.” It’s not obvious to me what the difference between the two is. The function of another stat, “Time”, is a complete mystery to me. Most COG games give you some explanation as to what the stats mean and I would have appreciated something like that here.

My second quibble is that the skill percentage system is a bit vague. I think the way it works is that having 50% in a skill like “action” is about average, having between 50% and 60% is excellent, and above 60% is outrageously superhuman. In practice I found this made for an awkwardly unintuitive system, because one can’t have below 50% in any skill, and while skill percentages supposedly go to 100%, getting above 60% in any one basically means that at a practical level you’ve maxed it out. I wish that the meaning of the number percentages assigned to skills had been explained a little better, or that a different system were used; maybe instead of number percentages, pulpy verbal descriptions like “bone-crushing brawler!” or “master of the mystic arts!” should have been used.

The Ugly: Not really a problem, but it’s worth noting that this is a fairly easy game, at least in the sense of being able to get desired outcomes. Fits the idea that one plays a larger-than-life superhero, but may not be everyone’s cup of tea. (Addendum: in my most recent walkthrough I deliberately made all decisions with the aim of failing skill checks. I still succeeded in defeating the main adversary at the end. I’m not even sure it’s possible not to triumph at the end, which certainly fits the genre but doesn’t make the stakes seem especially high.)

Feels great that I can finally talk about this! Great to see this game released! Everything about it is exciting in my personal opinion, and the pulp ideas are always a joy to see!

Whoever wrote that blurb does a hell of a job selling the game. I’m going to have to check it out.

Question: Am I the only one who has the feeling that his stats should move but sometimes they don’t?
I’m probably not quite far, but for some. Choices ( after Dr. Zetas “death” I chose the plan part, having a flat in the Bronx, I next choose the Stealth approach but nothing changed. Also Science, History, etc. Haven’t changed even though I choose answers that are connected to the topic sometimes feel as if they should have a weight, but all I get is the next page instead of seeing something changing in the stats. It feels off, but maybe it is because I am used to it so much?