"Choice of the Dragon" is now on Steam 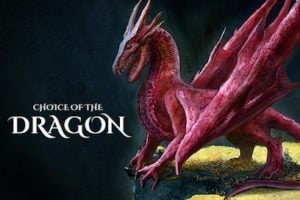 We’re happy to announce that Choice of the Dragon, is now available on Steam for Windows, Mac, and Linux. (It’s still available on iOS and Android, too.) It’s 40% off on Steam until March 28th!

Tyrannize the kingdom as a fire-breathing dragon who sleeps on gold and kidnaps princesses for fun!

Choice of the Dragon is a thrilling interactive novel by Dan Fabulich and Adam Strong-Morse, where your choices control the story. The game is entirely text-based–30,000 words, without graphics or sound effects–and fueled by the vast, unstoppable power of your imagination.

Battle heroes, wizards, and rival dragons in your insatiable thirst for gold and infamy. Start by dominating a local tribe of goblins, then usurp the kingdom, defending and expanding your despotic regime to annex neighboring kingdoms, incinerating the peasants in their thatched-roof cottages.

O, mighty dragon, spread your wings and let your shadow fall over the terrorized nation beneath you!

• Play as male, female, neither, or an undetermined gender
• Find and seduce another dragon to be your mate
• Kidnap princesses for good conversation, to bait heroes, or for a light snack
• Isn’t it a little sexist to always kidnap princesses? Kidnap a prince instead
• Ransack holy temples, blaspheming against vengeful gods

Noice. Do you think you’ll be charging for it on the other platforms, too?

This was on of the first Choice of I read, but it was a little short, and kinda just ended abruptly. Would possibly buy it on Steam as it sounds like their is more to it, has it been extended?

This is a very old game. Like the first game released I think.

Choice of the Dragon was one of the first published CoG, hence why it’s only 30k words compared to the “monsters” of today. The word length standards for getting published were lower back then compared to now because the company/software was newer IIRC.

Nowadays, the HG brand label requires a draft be 30k words long (not including code) to be considered for publishing. The notion that IF have to be a minimum of 100K is not a company standard (at least for the HG brand; I am unaware if the CoG has a word count minimum identical to the HG brand), but rather something that’s risen from consumer side/perception thanks to the increasingly larger size of these interactive novels.

I believe the 100k mark is in fact a minimum for CoG itself, based on the contest entries. Even if it isn’t literally one, it would functionally be one because I can’t imagine the last time the main label put out a title under that mark.

I pretty sure they must have the standard word count somewhere. There was a link to a word document in an older thread I found to be insightful; I think it was for prospective CoG authors and it was basically like a guide for them to follow. Anyway, thanks for the reply!

Thank you for the explanation, as it definitely makes sense. The 100k is something that is mentioned on one of the “writing for us” info pages for CoG official or HG contests or something.

Sounds like the writing has not been extended on this, so not worth buying a second time.

Anyone have the spoons to respond to the negative reviews that this is not a new game?

Nowadays, the HG brand label requires a draft be 30k words long (not including code)

Actually, pretty sure it’s still 30k including code for HG.
It’s just most are longer.

To be fair, we all know many people don’t read the descriptions before downloading and then leaving negative comments in the reviews about something that was clearly stated on the download page on all the stores. Since there hasn’t been a sub 100k story from cog for a long time, they probably just expected it to be triple the length. It’s still a freebee on the other platforms which gives it better chance of people overlooking the shortness in reviews. (For the record I like COD

This may seem a bit random but I’ve made a 100% Achievement Guide for Choice of the Dragon:

Wishing you all a wonderful springtime.