Another one - in empathy.txt, if your robots kill people who attack them and you still have a company, you can attempt to deflect blame to the company itself by arguing that they are a defective product. Whether this defense is successful or not checks

to determine if it fails on the grounds that it’s obviously not a defective product. The use of lawyerexcellence there means that a better lawyer actually makes your defense less likely to succeed, since it lowers the maximum allowable grace.

@FairyGodfeather Hm. That’s not ideal either, though I suppose it is something.

On the All Quiet path after saving the PM, if you join up with U.S. Robots for some reason, you don’t get to pick what kind of robots you want to work on-it just slides over to the Grace chapter.

Also, why does Juliet’s death increase your power in a war against China? That probably should be limited to conflict with the US.

Speaking of the military path, you’re wanted_in_america if you rebel against China and become a dictator or give Alaska to the robots, but not if you give it to your bot or make it a true democracy.

I found a bug: Even after Josh gets fired, if you seek to create human immortality you have to ask his permission, even though he’s in no position to say yes or no.

Not exactly a bug, but I have to wonder why I don’t get the option to choose my robot’s voice when I power him on for the first time, looking at me. In looking at the code, it seems the option only comes up in the other two selections (starting him up look at himself in the mirror or looking out the window). By the same token, choosing the other options restricts me from selecting what he addresses me as unless I choose a specific route.

Edit: Also, I don’t really see why I can’t devout some of my company’s resources to researching new power sources outside of the cellphone batteries embargo. I mean, it would make sense that once resources were high enough, new options could be explored for a power source other than the regular commercially available variety, right?

Hey, I’m new to these games and I’m curious as to how you’re viewing the game code. Could you please elaborate on that?

Thanks very much for the link!

Not sure if I read it rite, but when my father died I chose to look into the genetic option to determine if I had it. Later when I fell ill, it says that mum should have told you sooner because I could have been tested for it and done something sooner…? Did I read it wrong or is this a bug, and there is away to save yourself sooner?
I agree, once I created the companion bot it’s seems like you miss out on a very large section of the game… Which is a disappointment Considering I prefer a longer game

-The next day, you hooked up Eve’s nuclear battery and demoed for Elly. You then spent the afternoon trying to teach science to a bunch of kids with Elly.
I installed a cell battery, later on I then installed a nuclear one once China stopped supplying cell

Only ones that come to my mind atm. Other then that I would love if the game was twice as long and that’s because I really love this game, it’s amazing!
Watched big hero 6 and thought the beginning would make an excellent sequel, like Real Steel.

Another one just came to mind. Seems to be a snow ball effect unfortunately.
I graduated and had already agreed/got the military contract before starting my company, but there was no income, mention of it after or work done for them, seemed odd considering that’s how I started my company, which made me also wonder why I had to get a loan or sell shares if I was recruited and funded by them. And when I chose my first “job” the military option was not there, which seemed right since I should already be with them, but other then agreeing at first, it didn’t seem I am… And if I was, I actually thought I would get a list of military jobs to choose from personally.
Once I meet Tammy she asked and came to work for me, which was odd since I should have been with the military, then later when the war started she quit when I chose to help out. It’s like someone breaking up with you because they found out I was a guy, even though they knew I was one before they asked me out.
And again, if I’m already with them, how and why are they hacking me if I developed the technology for them anyway? Plus I would think they would protect their investment and go to war straight away if China was stealing/hacking “government systems” instead of waiting for a law to be passed about USA products being stolen…
And why would my teacher be there with my stolen research if he got me the job and I worked for them in the first place…?
This whole brunch I walked down seems in quite a bit of mess

I don’t know if this has been mentioned, but:

In “Goodbye”, during the hospital visit after recovering from the stroke, when read the choices you have for surgery your romantic interest always frowns at the option of being made part AI. Even your companion bot or Josh, both of whom react extremely enthusiastically after you make that choice, frown at this.

I feel like the romantic interests who are enthusiastic shouldn’t be acting this way when read the choices.

When I switched to bio diesel and mr sun tried to blow up my robot after I put it in debug mode it gave me the option to rip out the bots cell phone batteries even though I switched to diesel.

Now as much as I love his game, and believe me when I say it’s one of my favourite resulting in many play throughs. But I have noticed a lot of my choices don’t match up with the story unfortunately… Too many on numinous play throughs to remember… But what made me question myself the most was the fact that I built a very human looking mech (skin and all) sex bot. Not to say this was a problem. The questionable part was for the first time ever! I had decided to keep my bots 3 feet tall, making/keeping them child like… Does anyone else see the problem here? I essentially made a child sex bot… Yeah I don’t think I need to carry on but is this a bug that REALLY lead me down the wrong path or just over looked lol…

I…I never thought of that ._.
My mind always either censored it or made the robot adult looking.
Now I will never stop imagining this…
Goddangit

@DreamWalker Make a note of the continuity errors and send them to Choice of Games. Choice of Robots is incredibly complex, which means these sorts of errors do crop up.

I don’t actually recall the original bot being able to be made sexual though. It’s never a romantic option. It’s just your second one that is. Are you certain you can make a child sex bot? Could you grab a screen capture of it?

@FairyGodfeather I will start making notes of all the inconsistencies, as I tend to play this game a lot.
I did find it odd (and very disturbing) it was possible, but yes it Had been the only time I remained 3foot tall, and was my last play (which is why it hung in my mind). In fact that play through had the most inconsistencies …

Are you sure? Because I tried to replay through and recreate it but I couldn’t. I tried to search the code and couldn’t. Could you go replay and find it? Because that’s disturbing. 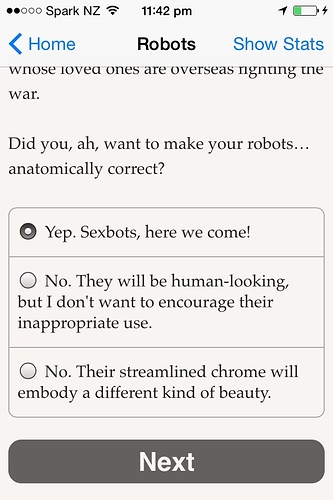 Yip once again I have the option to create sex bots. now keep in mind that it doesn’t actually say they stay 3 foot, but on that note, it never says that my original bot changes size either… So essentially this bot must be 3 foot tall lol… Also note that this play through was somewhat different from my last as I could not recall all choices, but still remains the same out come

Thanks for that. I went back and double-checked the code. It does specify that the bots being made anatomically correct are companion-bots. They’re not the robots modeled on your original 3ft tall robot, they’re a new set of robots you’ve designed specifically to be companions.

Which is not to say there aren’t still continuity errors.

Send in screenshots with context and I’ll happily pass it on to the author.

@FairyGodfeather yeah wasn’t sure if that meant the size change or just that, anatomically correct. Thank you for your time in checking for me