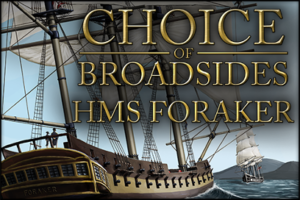 We’re proud to announce that Choice of Broadsides: HMS Foraker, the latest in our popular “Choice of Games” line of multiple-choice interactive-fiction games, is now available for Steam, Android, and on iOS in the Choice of Games Omnibus app. It’s 40% off until September 13th!

Command a royal warship and destroy your enemies at sea! As a veteran navy captain in the world of Choice of Broadsides, you’ll fend off (smugglers, slavers, and) foes of the crown to seize your place in history.

Choice of Broadsides: HMS Foraker is an 85,000 word interactive novel by Paul Wang, where your choices control the story. It’s entirely text-based—without graphics or sound effects—and fueled by the vast, unstoppable power of your imagination.

It’s 1813, and you’re a key sailor in the naval war between Columbia and Albion, where aggression is rewarded and cowardice can get you killed. If you seize enough treasure, you could be set for life – but hesitate against the enemy and you could end up facing the firing squad.

Board enemy ships and force them to surrender, or use your connections to stay out of the fray. Will you steer your crew to glory, or go down in infamous defeat? What mercy will you show your prisoners? Can you control your composure while fighting a war? Revenge yourself on old rivals and reward your allies for their devotion. And whatever you do…

Don’t give up the ship!

• Serve the queen or the king, with an all-male or all-female crew.
• Captain the powerful warship HMS Foraker.
• Train your crew for combat, with kindness or cruelty.
• Parley with smugglers, slavers, and other unsavoury characters for tactical advantage or personal gain.
• Inspire devotion from your crew, or sway your superiors back home.
• Confront storms, accidents, and other maritime disasters.
• Master the balance between bravery and cowardice, cunning and folly.
• Win glory, treasure, promotion, a knighthood, or even a noble title.

We hope you enjoy playing Choice of Broadsides: HMS Foraker. We encourage you to tell your friends about it, and recommend the game on Facebook, Twitter, Tumblr, and other sites. Don’t forget: our initial download rate determines our ranking on the App Store. The more times you download in the first week, the better our games will rank.

Sounds good, just bought the game. I liked the original Choice of Broadsides, hope this one will be good too.

tried the demo , and…there is no romance right ?

look like a decent game , but I think I pass . all those ‘sailors’ talk lol its like gibberish to meh

I threw money at it already. Love @Cataphrak 's work!

Just a heads up: I am following this thread, so if you’ve got any feedback or bug reports, posting them here will bring my attention to them pretty quick.

Yeah no mention of romance? Sorry, but I’m a sucker for the stuff.

Won’t be getting this one.

Hey are we twins lol

It’s free to play, you don’t need to get it.

I’d recomend trying it anyway. Imagine if someone decided not to play Creatures Such as We beacuse they didn’t like romance: they would have missed out on a great game!

By the same virtue, get out of your comfort zone! Might discover something very fun, and for free to boot!

Is 85,000 words the entire story or just one path? I only got three chapters, seemed pretty brief to me.

Is 85,000 words the entire story or just one path? I only got three chapters, seemed pretty brief to me.

The whole story is 85 000 words, but there’s a lot of branching under the hood.
It was always intended to be a relatively small and self-contained story as opposed to a “full” title, which is why it’s free.

free this instant," $[rponoun_1} seethes as the two of you form a miniature council of war,

The [ instead of { means it doesn’t use the variable.

It’s a nice call back to an older style with it’s shorter freeware nature. Only played through it once so far, and surprisingly I seem to have done pretty well.

Same to me I ended like a super marshall hero @Cataphrak lol I HAD A STATUE IN MY NAME sadly no horse in the statue. I loved my ending as I did nothing military at all no fighting and epic win !!

I got a knighthood and a bunch of money, after doing really well at the start, but then getting knocked on my ass just as we were about to win. We still won, but I missed it on account of being unconscious…

Mara solution make parties have friends. Send rest to fight They die you become Most awesome hero in Albion and Marshall With a badass statue and knight WITHOUT FIGHT i don’t break a nail

Congratulations on the release!

So short but well… its free

No lie, a good two thirds of the achievement names are references to Heart of Oak, Spanish Ladies, or Barrett’s Privateers.

Big fan of the first Choice of Broadsides and the whole genre in general. But I was a tad disappointed by the length. It took me 10 minutes to play through on the first go. Even after the third playthrough I was not able to find anything new. Maybe I’m missing something major, but there are only 2 real battles. The one at the beginning at the one at the end with the frigate.
And not sure what you all mean with free? As its stated in post, its 40% off until the 13th and currently costs 2,39€.

In any case - well written, nice characters but a tad too short for it not being a “free stand alone”.
Big fan of your work Cataphrak!