Hello hello! I began working on this story about a year ago in between updates of Children of the Gods, and it’s now taken up a big chunk of my time over the last three months.

Here’s the premise: The year is 498 A.W. (After the War), the location is New Eden (future industrial East Africa, the epicenter of technology and trade) and you play as Nova, the child of two renowned human evolutionary scientists. After a freak accident, you awaken to find yourself thrust five years into the future (503 A.W.) where rising tensions between Synthetic beings and humans threatens centuries long peace. Your story, technically, has already happened, and is now being told through immersive flashbacks that will ultimately reveal the events of the last year to you. You play a key role in uncovering the agenda of mega-conglomerate Syn Co. and its mysterious CEO, all while navigating the moral and political dilemma surrounding Synthetic beings, whose fight for human rights has lead to an increasing number of violent protests and political coups.

The question at the core of the story is simple: what makes us human?

Feedback: One of my main concerns with this story as an overwhelming and unnatural introduction to this complex world. There is a lot of information presented in the first chapter, and I’d love feedback on how to introduce cultural and political history accurately and naturally. Is this world believable? Are the characters dimensional? What is confusing or not expanded on enough?

Besides that, any suggestions on improving the pacing/introduction to characters/and code bugs would be very appreciated. Oh, and grammar, please.

I don’t know is my internet or something, the picture in the very first page is kinda of break?

You might want to change the name as there is already a game called “Remember me” developed by Dontnod Entertainment and published by Capcom. I’m just trying to make sure you don’t get sued.

Edit: Just looked it up, and it’s indeed trademarked like I thought.

Are you still working on it? I hope this question isn’t annoying, cause I tried to go to your blog but I can’t find any update. Thank you so much!

“I think should read it, Day. This is something you need to know.”

Put ‘you’ before the bolded word.

Bug found in the choice:
“I try to use my lasers to penetrate the glass.” 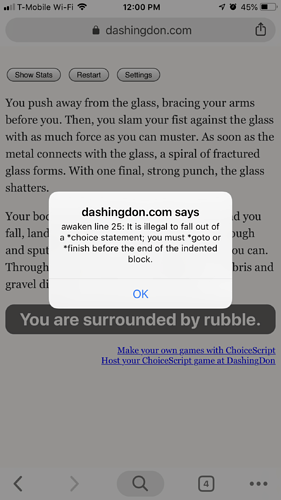 I like what is there. Looking forward to more.

I don’t know is my internet or something, the picture in the very first page is kinda of break?

Had trouble uploading the title image via Dashindong? but given that I’ll have to change the name anyway, it’s a sign!

You might want to change the name as there is already a game called “Remember me” developed by Dontnod Entertainment and published by Capcom. I’m just trying to make sure you don’t get sued.

I had a back up name just for this very instance—thank you!

Are you still working on it? I hope this question isn’t annoying, cause I tried to go to your blog but I can’t find any update. Thank you so much!

I plan on making a new thread for Children of the Gods, but as of right now since the finished demo isn’t out, I rather not start the new thread.

really love your demo so far! the premise is super interesting and the way you write is beautiful.

found one bug in my playthrough:
w/ the emergency release choice, the “you are surrounded by rubble” button presents the error “awaken line 36: bad label rubble” & the game freezes out entirely.

and a few grammatical things:
in the choice to not have implants

“The only thing you’re having a hard time understanding is the word no .” you shot back.

The boy is a sight; skinny with tired-ringed eyes and dry, cracked lips. He wears a plain black top and pants, the Nova Lab’s logo on the chest.

Your father places a large hand on your slight shoulder. “Do you think you can do that, Phoebe? Can we trust you to help he?”

bolded word should be him

I really love how there are different scenes for whichever choice we choose for our relationship with Day! I haven’t chose the rivary yet, but I just love how the family and love interest path are so different! <3

Good to see you’re still writing! After breezing through — just to take a precursory look for the feel of this story — it’s quite promising! But I’ve ran into a bug and I’d like to replay the chapter completely before giving away my thoughts 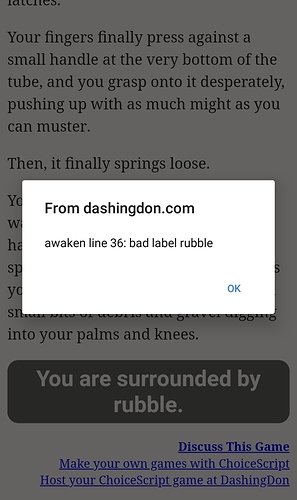 Thank you for replying

A game written after my name? Absolutely on board love it

I definitely think so far it flows really nicely, and I’ve always admired your writing style

so im very excited for this! Can’t wait

Absolutely loved the demo. I think you’ve done a great job of introducing the world without the information feeling overwhelming. It’s pretty amazing.

I stumbled on an error however:

EDIT: Oh, and the save system seems to not be working properly.

@Rohie! It’s so good to have you back and see you writing again!

This usually isn’t my typical choice of genre but I think this story looks really promising! I’ll be keeping tabs on any updates you publish.