Avatar Of The Wolf — Hunt down the killer who murdered the Wolf god! 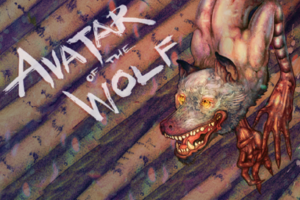 We’re proud to announce that Avatar Of The Wolf, the latest in our popular “Choice of Games” line of multiple-choice interactive-fiction games, is now available for Steam, iOS, and Android. It’s 25% off until Jun 28th!

Hunt down the killer who murdered the Wolf god! As Wolf’s last avatar before his assassination, will you revive your god, take revenge on his killer, or destroy the pantheon and bring about a new order?

Avatar of the Wolf is a 135,000-word interactive fantasy novel by Bendi Barrett. It’s entirely text-based, without graphics or sound effects, and fueled by the vast, unstoppable power of your imagination.

In a savage land where the gods manipulate mortals like pawns on a chess board, Wolf’s divine power controlled you and protected you. But since Wolf’s death, the eyes of Hawk, Spider, Bear, Gazelle, and Eel are upon you. The embers of Wolf’s power still burn within you; your remnants of divinity threaten to topple the pantheon.

Forsake the gods and join the Rising Sun, a heretical sect that defies divine rule. Embrace the anarchic, self-serving ethos of Spider and her seductive avatar. Obey Wolf’s feral impulses and slaughter your enemies as head of the last Wolf enclave, or forge a lasting peace without spilling a drop of blood.

The gods are fading. Will you hasten their demise or harness their divine power?

• Play as male, female, or agender, straight, gay, bi, or asexual.
• Discover the secret behind the disappearance of Wolf, your patron god
• Take up the mantle of your savage missing god, or strike out on your own path
• Receive the blessings of the Spider, Bear, and Eel gods… by force, if necessary
• Ally with the followers of Wolf or join up with the god-hating Rising Sun
• Convince the head of the Wolf enclave to recognize your superior power or lead alongside them
• Choose to survive peaceably in this brutal world, without taking a single life
• Impress the pantheon of animal gods, reject their rule, or usurp them altogether

We hope you enjoy playing Avatar Of The Wolf. We encourage you to tell your friends about it, and recommend the game on StumbleUpon, Facebook, Twitter, and other sites. Don’t forget: our initial download rate determines our ranking on the App Store. The more times you download in the first week, the better our games will rank.

Hi, everyone!
Sheep here.
Wolf recommends you buy this game immediately.
Or nothing bad will happen.
No, really.
You can trust me, I’m a sheep!

Bug report with spoilers regarding the end of the game:

After consuming Wolf I chose to return to the enclave (start a relationship with Lyall) and attack the Rising Sun, but later the game says that before long the enclave sought me out, that things are cordial between us but that my choosing not to return to them damaged my relationship with them, which is the same thing I got when I chose to go back to the caravan and Ghazal.

I am glad to see this up! The three chapter demo was one of the most interesting ones I’ve seen in a good long while.

I will note, however, that I personally wasn’t a fan of the demo being released early. I played the demo, loved it, made the decision to purchase, and couldn’t because the option wasn’t available yet.

It seems like there isn’t an option to purchase the game through the CoG website, am I missing something? I prefer keeping all my CoG releases consolidated on one platform.

It seems like there isn’t an option to purchase the game through the CoG website, am I missing something? I prefer keeping all my CoG releases consolidated on one platform.

The “Buy It Now” button

seems to go to steam:

This sounds amazing. I’ll be purchasing it tonight.

New releases are not available on the site for the first week or so of release, in order to encourage folks to buy on Steam.

Question: I tried to go with most chaotic possible choices so I can get spider, but my Path almost always goes back to Wolf and things don’t always go as chaotic as I hope it could be, due to a lack of certain stats. Could appreciate some hints on being a Spider and getting the chaotic achievement, thank you!

How railroaded is this one? I enjoyed the free demo and find the concept interesting, but I’ve been disappointed lately with recent releases regarding replayability

Just finished my first playthrough and Im looking forward to play again! The choices of letting someone live or die has a noticeable affect on how people view you and the ending I believe. The game is also very well written. So I’m playing a more merciful character this time around.

I’ve also been disappointed with the replayability of the last few COG releases but this game has broken the spell it seems.

I bought the full game though I haven’t played past the demo yet. I’ve been totally exhausted from my trip and haven’t been able to focus on anything so I’ll have to save it for a later date ;w; I really like what I’ve played so far tho

I also really love the cover art!! It’s by the same artist as the Demon Mark cover isn’t it?

@RETowers Please include the save/load option

I can’t tell you how many times I had to restart.

I just registered here to report the same thing. Its quite dissapointing to see that this has neither been fixed or even acknowledge in a year, it really spoiled what was otherwise a very fun and interesting experience.

What platform are you playing on? As far as I know, this bug was fixed.

I got it on Steam yesterday.