So apparently you can only have 100 achievements per game?

I’m a bit surprised, considering there is a 1000 points you can allocate to achievements. Wouldn’t that imply that you can have as many as one thousand achievements per game if they’re all allocated one point?

Not that I need that many, but I was aiming at more than a hundred. Would it be possible to increase the amount of achievements games are allowed to have?

I don’t think that’s the issue here. The code for achievements doesn’t seem that complicated and if storage was an issue, wouldn’t that also affect things like images and the amount of code/word count a game can have?

My guess is the cap was arbitrarily chosen simply because nobody expected anyone to need more than 100 achievements.

I could be wrong, of course, but if I’m right… why not increase it?

So apparently you can only have 100 achievements per game?

Correct, at least according to the wiki:

the maximum of 100 actual Achievements in total

The *achievement command is used to define one or more Achievements able to be awarded to a player for noteworthy feats or accomplishments within the game - solving puzzles or mysteries; overcoming or otherwise surviving especially...

at least according to the wiki:

It’s true; I ran into that issue myself yesterday. 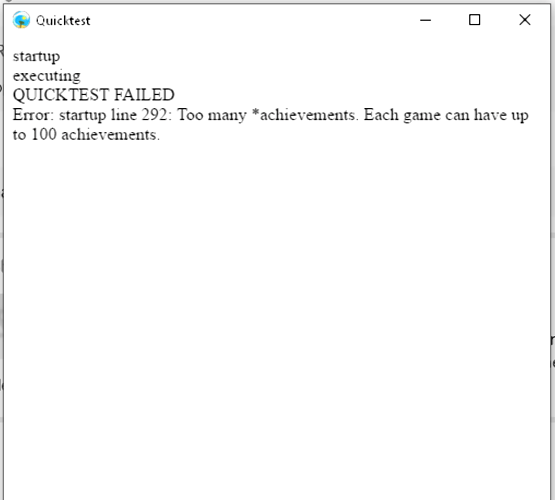 I think that goes the same for longer games like The Zombie Exodus as having an achievement cap can limit the creator’s desire to show his readers the possibilities to explore. It’s just an observation of a limitation, but I have no problems with the current system at least as a user who enjoys the creative work of a community as diverse and friendly as this.

An analogy that I can remember from that is when SimCity was criticized in 2013 precisely because of the space limit that the player’s city had as well as a limit to develop and plan your city, which was solved with Cities Skylines.

It is just the matter that the author/programmer wants to show his readers the number of routes they can reach since the universe he is creating is extensive and it can be a way to encourage the reader the different possibilities to discover secret or interesting things. of your story.

I don’t know it’s a thought that just came to me but I may be wrong because I don’t have enough knowledge of this phenomenon related to the achievement limit.

Apple currently limits games to 100 achievements, and Steam also imposes a 100-cheevo cap on new games. I could see CoG lifting the cap if all the platforms they publish on did as well, but at the same time–eh. I gotta imagine there are more important concerns. 100 is a lot.