Hi, this is my current WIP!

You play as a pizza-delivery boy (or girl) who’s struggling to make it by in the city of Albios Vertex, the world’s hub for innovation and tech. You can investigate a murder mystery with your best friend, infiltrate a corporate conspiracy, fall in love with an AI, and more. Here are the current ROs:

Nagisa Miyamoto : A private detective who also happens to be your best friend. Gender-locked to the same gender as the player character.

Lucien Langlois : A charming bartender with a secret. Genderswappable.

I’m thinking of adding more as the story progresses, but for now it’s just these three. It’s currently at around 35K words, but my goal is to reach at least 150K, maybe more if the story calls for it. I’m planning on updating once a week, with a goal of at least 7k words a week.

Constructive criticism is always welcome. I feel that there is much to be revised and fixed, but for now I’m focused mainly on moving the story forward. I’d like to hear what you guys think, and any suggestions on how to improve would be greatly appreciated. Thank you!

Error after choosing how I me the friend. 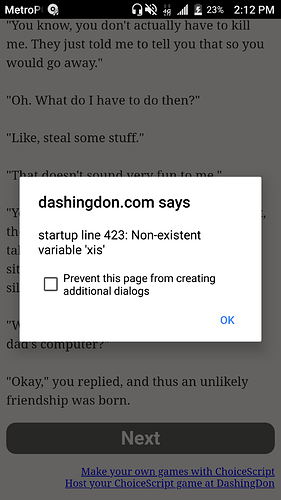 Was the game supposed to end in the scene in which you report your future best friend for harassing you in a video game?

It happens for all the choices after you choose how you met them.

Alright fixed the xis variable issue, thank you so much!

No, do you have any idea why that could be happening? I can’t seem to find anything wrong with the code.

Im still getting the error when I picked he “harassed me constantly” for how we met.

I just updated the text files, perhaps now it is fixed? 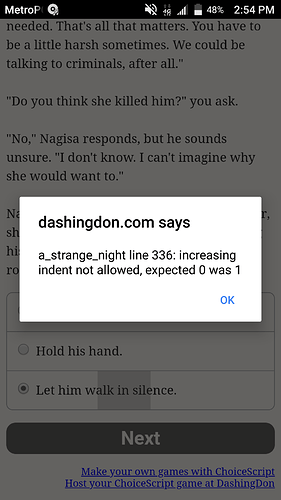 I am just going to read this and enjoy it.

Fixed, thank you so much!

Thanks for the support

I feel like parts of it in it’s current iteration just isn’t “cyberpunk” enough, if you have any suggestions they’d be greatly appreciated !

I really like this, most likely because it’s a set during the Christmas season and I absolutely love Christmas, but I also really like the characters and the interactions with them. I look forward to seeing more of this.

Well, so far I love this to death. It’s pretty great. I only noticed one typo so far, which is here after I chose to sneak up the ladder.

Should be friendship. Not frienfship.

That being said. I love the feel of it so far. Though I think if we picked to be just from a poor family which prompted to join us to join what is essentially to me a street gang, whose to say we didn’t illegally get any kind of implants or cybernetics during that time?

Beyond that. I admit I have a tiny issue with all the stats being in lowercase. That’s just me nitpicking though!
I’m still reading but I just want to say I love this.

Awesome, thank you so much! I’ll keep that in mind

I was searching for a holographic AI romance story for a few days and came up empty-handed aside from WIP visual novel (which ignited my interest in such story in the first place). Few days later and a WIP pops out with an exact romance option I was looking for. Figures. It’s too bad I always use up my luck on stuff like this and then my lottery coupons all end up losing.

You see Nagisa dancing with a young blonde ${opan}. His hands are on her hips, and they are engaged in a rather lewd performance of pelvic gyrations.

You assume sexes here instead of making use of variables.

There was also a typo somewhere, but I can’t seem to find it right now. I’m sure it’ll come up eventually (if not by me, then by someone else).

I quite enjoyed my playthrough and can’t wait to see more.

But i found this 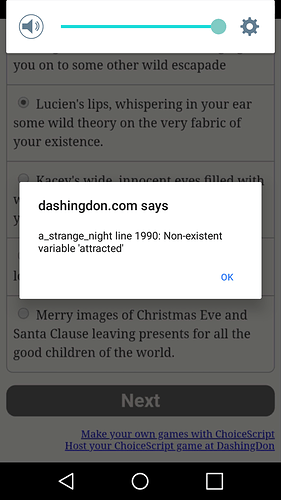 Fixed it, thanks a lot!

Another Typo I noticed.

Also I noticed this as well.

Also might I suggest doing slight alterations to a characters name based on their gender? Lucien to me is a guys name and hearing come from a woman, is kind of odd to me. Just a thought. Lol.

Thanks, I’ll fix it