You’re a member of the Royal family, second-in-line to the throne of the Kingdom of Arcadie, the most powerful country of the continent.

You’ve spent most of your life with little responsibilities and the freedom to pursue your personal interests.

Today, Arcadie is set to sign a peace treaty with your northern neighbors, putting an end to a decade-old conflict. You’re to be put in charge of any future dealings with them.

And thus, the first day of the rest of your life begins…

Hi everyone!
I’ve been working on ‘Arcadie: Second-Born’ since June, and I would like to share the first few chapters with you.

NSFW thread and demo: https://forum.choiceofgames.com/t/wip-arcadie-second-born-nsfw-thread-and-demo/87912
To access it, you need to be logged in + joined the Adult readers group.

I like It but question what is the aether?

Overall, it’s good! Your writing’s solid, worldbuilding doesn’t seem to be out of place and I can get to be a comical prince capable of killing everybody in the room

Good luck! Looking forward to this.

Seems really good so far. Writing is great, and so far the world you’ve build seems interesting. I’ll admit though, that I both love and loathe stories where the MC is the “inferior” kid in the family. Especially when there’s a huge “power” gap between you and the sibling. It’s like, yeah the army doesn’t even know the name of their second princess. Thanks for telling me how unimportant I am at the current time of events, in the grand scheme of the coup.

I did say that I love it though, and that love comes from the same loathing. It allows me to play as character who hates their station in life, and who’s bitter at their family for how unimportant they are. Sure, she grew up with luxury and riches unlike anything a normal person could hope to dream of, but what is that worth when you always feel like you live in the shadow of your sibling? When you feel like you’re barely contributing to anything worth mentioning? Don’t take this little rant as me not liking your work though, because I love it so far. Stories like this just hit close to home, so I guess they tend to make me more immersed in the story compared to most other novels

well, i haven’t been this glued to my laptop’s screen in a while. Absolutely loved it. now i can’t for the demo to be updated.

Gosh, I’m enthralled by your writing! The worldbuilding is really interesting, and the characters are so charming. I have to admit that I did not expect that turn of events, but it was a good surprise! I’m looking forward to seeing more of your writing and keep up the good work

this is really, really good! i really like it so far. i have one question, though…

what the hell does mostly heterosexual mean?

Really interesting so far, wondering if we’re able to grow stronger at all or always be behind our sister. Won’t lie I’m a little annoyed that there’s no real female RO and just a gender flippable one, and the male RO immediately gets introduced.

Could it be possible to ungray speaking to the parents in the beginning, my MC could personally care less about Wilfred and don’t really see a reason why they would go talk to him instead of just ignoring him and talking to their family to speed up the meeting they don’t care about. 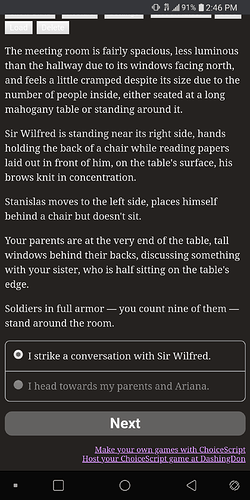 Also maybe just for me, but there’s an infinite load to get to chapter 2.

From what I’ve read so far, I think it’s magic.

Won’t lie I’m a little annoyed that there’s no real female RO and just a gender flippable one, and the male RO immediately gets introduced.

Yeah, this book does not bode well for the gays. Between the “mostly heterosexual” man for mlm and the only female RO being gender-flippable while the male RO is gender-locked for wlw.

Thank you all so much for your feedback! I’m so glad you seem to like it so far!

I like It but question what is the aether?

As @Ayrton3326 said, it’s basically magic. Only the family of the MC can do anything with it, though.

Oops! Thanks for catching that!

what the hell does mostly heterosexual mean?

It’s mostly about different reactions depending on whether the MC is male or female. But I don’t want to offend anyone, so I might just make him bisexual in the end.

Could it be possible to ungray speaking to the parents in the beginning, my MC could personally care less about Wilfred and don’t really see a reason why they would go talk to him instead of just ignoring him and talking to their family to speed up the meeting they don’t care about.

Yep, I can totally do that. I didn’t want people to miss critical info by not talking to him, but I don’t think he says anything you can’t afford to miss.

Also maybe just for me, but there’s an infinite load to get to chapter 2.

It works for me, but Dashingdon is being super slow right now.

Love the game, can’t wait for more! At one point in the game it calls Cyril a he when I put her as a female. And there was a misspelling when they announced the king and queen dead in the meeting room (i think).
Overall, I loved the demo and can’t wait for more. This is my favorite demo right now!

Really liking the premise and presentation so far; I know there are many who chafe at perceived feelings of powerlessness in IF (which is valid, I suppose), but I’m personally really excited to explore the dynamics of a story where the MC is inherently seen as second best.

Not yet sure how I feel about the RO issue—I do like the idea of making romance a more dynamic and robust system, and can accept limiting the RO count to accommodate this decision, but the two options provided do feel a bit restrictive. Even putting gender/sexuality issues aside, Wilfred and Cyril don’t yet seem that different in terms of their overall role in the story (they’re both seemingly loyal officers in service to the kingdom), so even despite their obvious personality differences, the pool feels somewhat lacking in variety.

Just read trough it. Good and easy to read.
One question, can we become so called “shadow ruler”. I mean rule kingdom through puppet monarch.

What to say that hasn’t already been mentioned? Strong writing, strong characters, and strong world-building, I was immediately hooked. I personally really enjoy it when royalty feels regal, and that is something you did very well. Everything from the description of the palace, to how characters act towards the MC and their sister really drives home the point that these are important individuals who command respect. Also, nothing like regicide to hook a reader in!

To offer my thoughts on the fact that we are essentially playing second fiddle to our sister, I personally enjoy it. I can understand the frustration of feeling like we’re constantly in the shadow of a more powerful character, but I think that leaves room for us to grow in power and influence throughout the work, something I find very rewarding.

I love the premise, I love what I read already, and I am eagerly looking forward to reading more!

Aww, so sad that our parents got assassinated so abruptly

But it’s okay, my loving and diplomatic MC will help out dearest sister lead our people to peace and happiness. I already love your game.

Can’t wait to show my sister that not everything is about war and death.

I was stanning Stan but then that happened.

Why is it always the nice ones.

Why does Stan have flirt options and points if there are only 2 ROs?