Hello today i present you with my very first wip. i never worked with choice script before and it was very fun learning where this thing goes, so that thing can work. Either way hope you like it, also am open and very thankful to any form of constructive criticism that will help this story grows. especially any grammar errors since english isnt my first language.

Currently it’s 7.7 k words making up the entire prologue, and Im already halfway through chapter 1 but decided to post a demo with prologue only, to see where i can improve.

thank you, the option should work properly now.

I edited it so the stats should reflect better on those choices now.

absolutely not, im happy to fix any issue presented by users here and even though im still a noobie when it comes to choice script, ill still try my best

the pronouns should work now.

For the future, you can find something called Choicescript IDE. With it, you can use the “quicktest” or “randomtest” function to find any gamebreaking errors before you update the demo.

Sharing cuz, well, I remember how many errors I found myself making too. Hope this helps.

will give it a try, thank you

tional because anger is being emotional

I thought i added that

the option will reflect on that now.

I just updated the Romance section to those who are curious

Looks interesting. I like tyrannycal monarch/commander theme games which offer choice to being tyrant and the clash of morals in it. This makes me remembered the old game i used to play which have the same title “tyranny” and its gloriously fun.

It’s a CRPG called Tyranny made by Obsidian, it’s great!

Sounds like this is gonna be similar but in text form, which is awesome.

I wish more mainstream games and brands would have a version in text form, like Halo, Uncharted, even James Bond lol

It’s a CRPG called Tyranny made by Obsidian, it’s great!

That’s excatly where my mind went to, seeing this title as well!

Such a great game.

Off to a good start. 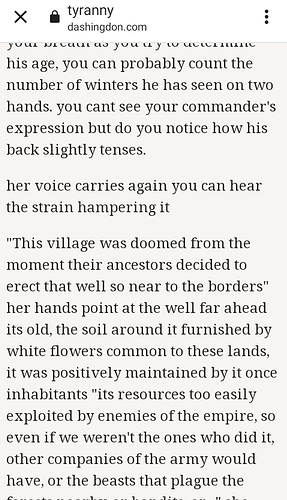 Thanks for brining up this game will def give it a try!

Yeah definitely, personally the Ros which i find most compelling are those whose moetivations arent that easy to pick up, which in turn i strive to hold true for all of my characters

Should be fixed now. thank you for playing!

You need a proofreader. Even small things like the constant absence of capital letters at the beginning of a sentence complicate reading and glue the text into a single mass. English is not my native language, I can’t pinpoint specific errors, but even I feel that there is something wrong with the text. It’s hard to read. And I’m afraid that in the current state of affairs, the vivid picture that you draw in your imagination will not reach the reader. Which is a pity, the game has potential…

I’m currently planning to do a major editing proccess for the prologue, to try and stump out any grammatical inconsistencies still plaguing the story. thanks for the heads up though