With that message frequency, maybe this should become a strategic game, like chess. Very interesting.

I really don’t know if it is possible but I just got this idea of using the modified version that @Sargent did that outputs the text of the game as you play in real time and use that file on a sharing platform (dropbox, drive, etc) so then the other player could read the coordinates (ideally the game itself could do that) and show another dot or arrow of the second player on the map or something like that. Again, I have no idea of how or if it is even possible to do that, that’s just what I could imagine with my limited knowledge.

Yes, that’s the idea. Each player would send their status to some server, and the game would have to query back to get the other player’s info. It’s all doable with *script… How far we can push *scripting and still say we are doing Choicescript? Does CS support a GIF socket?

I love seeing ChoiceScript get taken into new and different directions. Never thought I’d see it go into a whole new dimension, but glad it’s happening.

Hi all, I’m happy to introduce two-player gaming in Choicescript! Inspired by the old DuelMaster etc, now two people can enter the maze and challenge each other. Find the bow or the sword, and then face your opponent.

Initially, I implemented a pure CS solution, where the game was showing codes that your opponent would have to punch in their game, but this got old quickly. The current implementation shares the players’ status in the background via a third-party server (using *script). 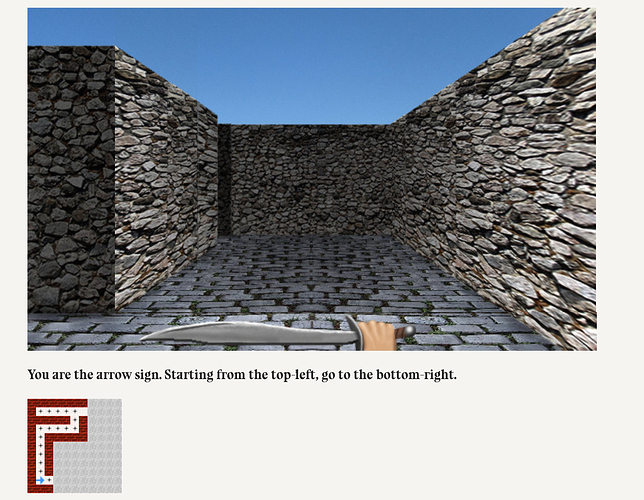 To play a two-player game, start a new game and choose “multiplayer”. Then share the link or the QR code with another person. The map will be shared, and the game will keep track of who finds what weapon. When you meet in the maze, the duel will start!

This is clearly only a simple proof of concept. Let me know your ideas to improve it.
Kudos again to @Loudbeat for the artwork.

Awesome! I’m going to cajole/bully/bribe a friend into trying this out with me ASAP. Thanks for all your hard work!

Two-player choicescript games via third-party server? That is just so awesome! Any plans to make a waiting room/lounge, so we don’t have to bother our friends with QR codes?

Hit the "seriously?" option for maze size. Loaded it up, scrolled down, had to boggle at the sheer size of that lad. That would be my version of hell. Kilometres of identical corridors twisting up and over and back on itself. An end is possible but unlikely. You have made a wrong turn and found yourself in The Back Rooms.

On the other side I was in heaven when I saw that CS could deal with that. Now that I know recursion works, I really want to write a real AI player of Connect Four or similar.