The Wayhaven Chronicles: Book One (WIP)

). I got to say- the sketchy and the black ink really adds to the feel of the scene!

if that’s a five minute drawing, then that beats all my half an hour drawings in one go!

My profiles take 1-2 hours don’t know how long it would take for a whole scene.

Love this story. Read through it probably a million times now, and the cliffhanger KILLED ME!!!

It’s amazing! Please make another book two! Or at least another update! You can’t leave me hanging at that ending!!!

The author is planning on 7 books for the series but the demo for Book One is done. Seraphinite though is around the halfway mark for Book One so fingers crossed the rest comes out soon

I am so ready for the next book to come out!!!

You should see her tumblr – all the very important questions are there (i.e. who is the big spoon and little spoon)

) even though seen how long hosted games takes to review and copyedit and all that it will be a bit difficult that this can be released this year, but there is still hope.

@Kristina_NRE - Yeah, that cliffhanger was quite a big one

Fun for me to write, even if it’s painful to read… mwahahaha!

I am still pushing to get Book One finished and into the Hosted Game queue this year, at least. Really trying! Would be such a major goal completed for me this year.

So, not as much writing done this week

Only managed to write yesterday, but got 5000 words completed and finished one of the split scene scenes for Chapter Eleven. Really pleased how it turned out too.

Yeah… gonna be fun and confusing doing the same for the others too now, lol!

I’m really looking forward to the love interest choice option, because at least then I can concentrate more on driving the actual romances and friendships forward, rather than trying to keep everything kind of more general, just in case.

But, away from the romance, it also feels like the friendships are starting to form a little- hints here and there. I’m really pushing into the proper story now too and it’s getting exciting! Still have 3 of the split scenes to go, but, hopefully, they’ll go as smoothly as the first. Probably next week I might even start Chapter Twelve!

And with the fanart lately, I was inspired to do another sketch of one of my playtest Detectives: 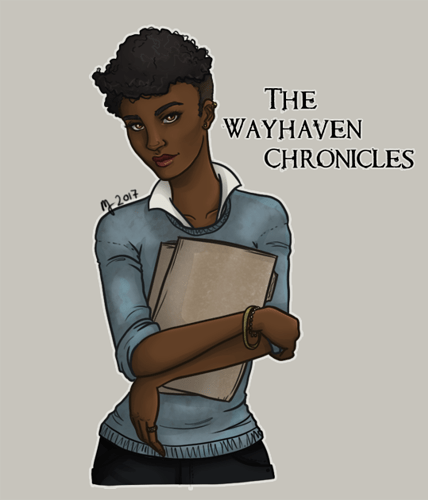 )- super nice and friendly. Kind of ‘kill-with-kindness’ person. Super quick doodle unfortunately as I’ve been rather swamped this week! I promise I’ll show one of my male Detectives next time…

Hope everyone is doing well and you all have a brilliant weekend! Talk to you on Monday

@Seraphinite I was just wondering, Is there anywhere in the story where Adam and my character kiss, cause I really want that to happen, and it would make my heart feel warm and fuzzy. It seems like the farthest I’ve gotten in points is 6 in flirt, and nothing different has happened depending on around how many points I’ve gotten that much, and I really want to see more romantic points in the story besides Adam putting his coat on me and pulling me close. But I am well aware that this is just a demo, and not the entire book. Just wondering.

This is not the finished book, its just a demo. There will likely be kissing scenes in the finished book, probably after the choice of who you want to romance is made.
Edit: No kisses in book one after all. That’s what I get for assuming.

not as much writing done this week

Only managed to write yesterday, but got 5000 words completed and finished one of the split scene scenes for Chapter Eleven. Really pleased how it turned out too.

NOT MUCH? 5K words are a lot(or at least for me)!! But thanks you for updating the demo.

NOT MUCH? 5K words are a lot

@Seraphinite Agreed. I’m trying to write a regular novel and if I manage to write at least 1000 words in a couple of days, then it’s a fucking miracle.

Then again, I’m quite lazy.

I feel like the romance with Mason will be very fitting for a Lana Del Rey song, especially if the MC has developed a strong emotional connection early on despite Mason being insensitive to their feelings and more interested in the physical aspect of the relationship. *sigh * I crave that tragic, bittersweet romance that (hopefully) gets better throughout the books as we gain Mason’s trust and loyalty. Though for now, my detective continues to deal with the unrequited love despite the pain it causes them because they’ve become so attached that they would rather be around Mason and in pain than have no contact at all. The MC knows they shouldn’t go down that self destructive path but their addiction to him continues to manifest and they believe that they’re strong enough to deal with it (but seriously are not). Like how smoking after sex makes cigarettes taste better, self destruction is sweeter when it’s delivered by your lover.

hm, the headcanon sounded less warped in my head…

That could just be me though

If you go to her tumblr, she answers a lot of questions daily about the ROs and story in general. The romance lock will be in chapter 15 I believe she said and that there will not be a kiss in book one but there will be more romance scenes.

I wish I had the supplies to draw on the computer

Too bad. Thanks for the info! 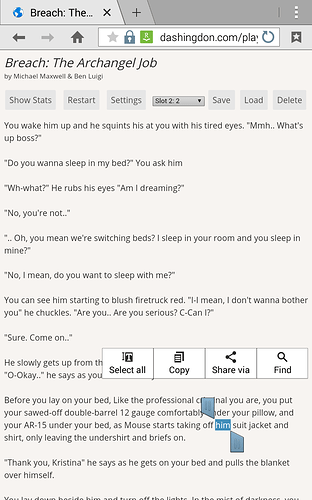 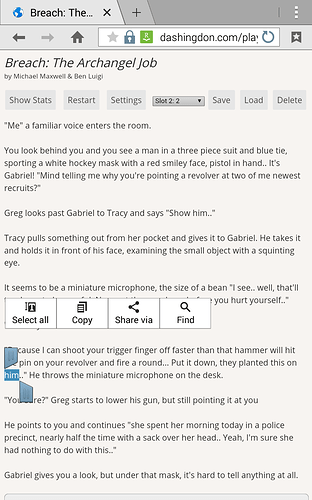 The blue highlighted are grammar mistakes