The Martian Job — Rob a casino? No problem. How about on Mars? 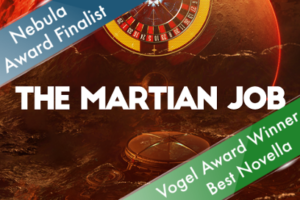 We’re proud to announce that The Martian Job, the latest in our popular “Choice of Games” line of multiple-choice interactive-fiction games, is now available for Steam, Android, and on iOS in the Choice of Games Omnibus app. It’s 40% off until October 12th!

The Martian Job is a 155,000-word interactive novel by M. Darusha Wehm. It’s entirely text-based, without graphics or sound effects, and fueled by the vast, unstoppable power of your imagination.

Welcome to Mars, where one last safecracking job could nab you enough platinum to last a lifetime. But how will you pull off your heist? Do you hack into the vault, blast your way in, or finesse the locks? Can you trust your misfit team of grifters and con artists? Can they trust you?

Succeed in your mission and win power, love, and money—or fail and spend the rest of your life tending bar on another planet. Pay enough attention, and you’ll learn about the corrupt Martian government as you go—along with the rebels who oppose it and the corporation trying to take it over. Will you choose to save the planet’s troubled colonists, or use the information for your own gain? You’ll also encounter opportunities to avenge an old comrade, thwart the machinations of a power-hungry tycoon, or start a revolution. Decide where your loyalty lies: with your team, with Mars, or only with yourself.

Can you shape the destiny of humanity’s first interplanetary colony—and walk away with a trunk full of platinum?

• Play as non-binary, female, or male, as ace/aro or as monogamous or poly, and find romance with people of all genders.
• Raid the first casino on Mars.
• Master real casino games like blackjack and roulette.
• Lead a crack team of expert thieves, or sell out anyone for a shard of platinum.
• Infiltrate the center of Martian power to control, destroy, or join forces with the planet’s rulers.
• Start a revolution to topple the government, or defeat the rebels from within.
• Dominate the corporate world with an elite interplanetary industrialist, force him out of business, or execute a hostile takeover.
• Control the future of humanity on another planet!

We hope you enjoy playing The Martian Job. We encourage you to tell your friends about it, and recommend the game on Facebook, Twitter, Tumblr, and other sites. Don’t forget: our initial download rate determines our ranking on the App Store. The more times you download in the first week, the better our games will rank.

Also, I’m loving the story so far.
That plot twist was not something I was expecting, and I am enjoying seeing how the team adapts to the situation.

I’ve absolutely loved the game but it felt really bitter to have the whole team except cap go against everything I’ve worked for in the final decisions. From the stats we all had great relationships but they still decided to go with consortium instead of resistance. The reason why they refused didnt go much beyond “we think thats whats right” and it leave me confused of what can be done to get the ending I worked toward.

Okay I was harsh in my previous preview of game. I keep playing it and even if I found the ends rushed and somehow stereotypical. The first part of game is magical as the heist part is fun. The team dynamic is fun. What I don’t like is the martian vs consortium how was introducing same with the Jacobi ark. I think It doesn’t go well with the game . It could made an interesting game in their same universe.

Probably, my problem is the game wasn’t what i was hoping for. I was hoping with Seductive dresses a martini and flirty my way up to casino owner or a millionaire 007 . Betray someone in team being a mole and retirement while pilot my aero Ferrari with a super model at my side. Or Brad Pitt in Oceans eleven .

Suddenly i discovered no sexy clothing no martini and no car or aero ship chasing . I was inside a damn dirty mine being a dirty peasant and have to save platinum to even eat or pay a ticket to stuff. Then I probably miss while skipping rhe rebels stuff my character was aginst and ended in a recluit speeches I ended up bored.

As I said that’s probably my fault to have certain expectations as game is well written and team dynamics except at the end were well developed. I would have liked tons more if the revolution stuff weren’t there as for me personally is totally a off immersion in the heist that is want I wanted.

Like score I would give a 7/10 trying to be objective.

My enjoyment however is a 5,5/10 and I won’t replay it. Still I give max rating as support and really recommend buy it as support.

So no glamour in this one then, even at the end?

I mean our mc has got to do something with their spoils right?

There is a sexy boy you can romance and achievements suggest some are you being rich. I ended being rich but Working as mine bar for some reason at least i banged and romanced the boy… But I was hopping for a Ball in casino with gowns and flirt with casino owner or his son maybe But that doesn’t make game bad, It was my fault have specific idea of how gamewill be

I enjoyed it. Played twice so far. First time I did go with the resistance because it was the type of character I opted to play. I ended up on Mars with the face-man. Felt good.

Just now I played a ‘born into crime and want an out, screw everything else’ and I ended up on Earth with an old friend.

Only a few occasion felt rather limited in choices and sometimes the skill in question to be used was unclear, but I have had two different stories that I enjoyed so far.

The game do nag you a bit about rebels and Jacoby, in places, though. Overall, I will play again as I enjoyed it.

I wanted to investigate a review that claimed the game stopped working after several hands of blackjack.
I played through several hands, betting 1 gram, then letting the winnings ride (if that’s at all relevant).
My game did in fact freeze up. I’m playing on Steam.
Clicking the next button, the stats, menu, etc, does nothing and I had to X out of the screen to close it.

I remember not having a blackjack, but having my hand add up to 21 before this screen:

Send bug reports to martian@choiceofgames.com. Thanks!

I completely agree, chose “Lets Terraform.”…“No thats dumb” “Let’s side with the resistance” “No, we’ll give it to the Consortium.” WHY THE FUCK AM I HERE THEN?

Turns out you just need a good relationship with the crew. I played again after and this time everyone went with my decision without really caring “hey lets give it to the resistance” “uh okay sure you know what you’re doing”