Today I started working on a side project that has been in my head for years. Mainly because I thought I lost my other games work and because I love the idea.

I’m a sucker for medieval fantasies.

Me to the great tournament was my first game

also this somehow reminds me the back story of loki, an adopted alien child of the king lol

I can def see that comparison! Originally it was just a orphan but I like the different race and potential for combating racism.

Seems like a interesting plot and yeah also reminds me of Loki which is cool, i imagine when the true heir is born things change quite a bit for the mc and since the game is about helping her i hope we can have negative feelings towards her and plans to take the crown.
Since the mc is 4 when they choose their name, when the king asks their feelings about him claiming them as their child the responses feel very adult and not something a 4 year old would say, unless the other races mature faster than humans.
Found a pronoun error

I agree. The responses felt too elaborate for a child.

One thing to note- a thirty foot oak door is immense. That’s the height of a three story building. It’d be incredibly difficult simply to have a door that size inside a building, much less for anyone (let alone a child!) to open it.

-should be “becomes my sole heir”, unless there’s something metaphysical going on.

I think what makes me most interested in this game is the dynamic between the MC and their sister. Because you just know that there will be bigots trying to turn the sister against the MC, trying to convince her that her siblings is a traitor who will usurp her.
I have a feeling that the MC’s sister will either be our worst enemy or greatest ally.

I would rather destroy her and take the kingdom…

I mean who would honestly give up the throne just to help there step sister?

I love medieval stories so much! I’m mainly going to focus on a reaven play through. Will we be able to choose how we fight and do things, like can I be an assassin general?

I really enjoyed this work. I am definitely interested in seeing where the story goes. I did find one error 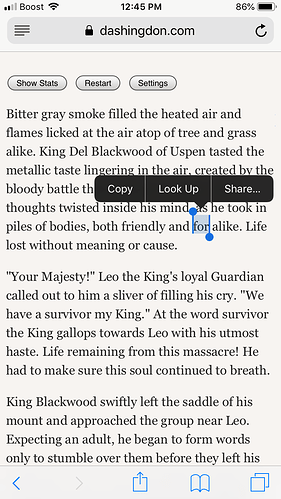 I feel like the name choosing should have Blackwood as one of the options when you’re choosing a last name. It’d seem to be natural for a 4 years old would want to take the last name of his/her guardian which happens to be the King. But I do agree with the comments that the responses after being adopted would fit a teenager or an adult better.

After finally marrying your father gives birth to a baby girl,