I’ve been wondering in terms of how to create a compelling narrative but the mc is overpower for the game world. Ex. Clever, experienced, generally able to kick the the butt of virtually any enemy in their fictional universe aside from the an actual god or the rare legendary monster. Then they’re also experienced as in emotionally mature and have seen most of what there is to be seen.

How to create a compelling narrative with sense of danger and potential for failure for the player when their mc is already powerful and expieienced as previously described.

How to get the player to be worried about their mc or their MC’s companions when the mc has already achieved legendary hero status.

I already have a few ideas on this myself (ex. Trying to get player emotionally invested, villains that challenge them in a truly unique way, etc.)but I wanted to start a discussion on here as to see if anyone else could expand my perspective.

Find their Kryptonite. Find one way in which the MC is vulnerable, and let the villains discover and exploit it. Just because a character is OP in some ways doesn’t mean that they can’t have exploitable weaknesses, too.

You got to challenge your MC. Not in the way e.g. Dragonball and similar do (i.e. making up more and more hyperpowerful threats for the protagonist to the point where it becomes absurd), but by giving them something that is challenging for them.

Give them something they hadn’t had to tackle yet (again, not in the sense of a powerful enemy).

Not all problems are punchable. This is how you create compelling challenges. Unfortunately, everyone in DragonBall is punchable and can be revived to be punched again, but it is indeed badass to punch the BBEG.

make it so that using their full powers is a moral dilemma and even if they’re the type to not worry about morals on an emotional level, they have to consider the effects it could have on the world in a logical way too. ie. physical destruction and people that want to get revenge on them for just bulldozing through everything without a care. me personally i really like overpowered characters that are appalled by their own power and using it has an effect on their psyche, or overpowered characters who have honed their powers perfectly but always fully consider the ethics of using them and more often than not, choose not to.

a great way to make people worried about the companions is to use that power. if they’re super powerful and well known, would there be people that want to threaten their loved ones? there has to be times when the MC isn’t with their companions and thus can’t immediately come to their rescue, and then you’ve got the tension of the MC trying to get to them in time before anything bad can happen

Maybe find a way or challenge with the MC can just use their powers to just brute force it, but instead has to solve it with a gentle/finesse approach, like an indestructible creature which has a shell so strong it can’t be defeated by your brute strength, but by some other means, like a chemical or whatnot. There’s so many ideas which one can implement in that setting, like a timer in which you can use your powers.

Create a sense of mystery.
If the enemy is unknown, and always a step ahead, it doesn’t matter how powerful the MC is. If the enemy can get to the people you care about, and you don’t know if you can stop them in time, that should be terrifying to most people, even if the are personally very powerful.

You should introduce a problem or villain where in the MCs abilities don’t use the same scale as the villain/problem.

This vid explains it more thoroughly and also talks about how to handle power scaling in stories n stuff. 12:00 is probably good place to start for you. Hope this helps 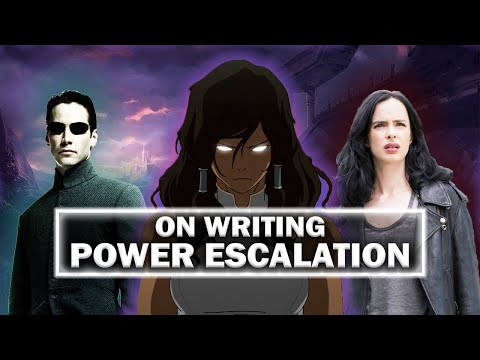 I would also recommend this article from Mythcreants

Five Characters That Are Too Powerful

Creating a spec fic character isn't always like creating characters in other genres. One of the unique challenges we face is preventing our characters from becoming too powerful - and dealing with them when they ...

I would put certain limits to the use of their power. Like if they use it too long they might go berserk, a mindless person slaughtering everything on their path. Maybe that happened one day far back in the past, which led them accidentally to kill someone important to them or whatever. So now they would be warry to use it to an extent or outright despise it.

Give them goals that can’t be attained by using their powers.

May I ask, If the overpowered player is such a Problem, why don’t you just limit the Powerlevel?
May be a stupid question, but it seems the easiest way for me.

I’ve always thought that Superman-type characters could be challenged/tortured by their knowledge of suffering all around them, and although they can address/resolve some, of even much of it, they can’t do EVERYTHING.

Put yourself in that MC’s shoes; let’s say you’re a Superman-type. How do you pick and choose who to save? I mean, there are always thousands of tragedies going on any second. What sort of moral ‘math’ do you use to prioritize one over the other? How do you justify taking even an hour off to do things like watch tv, take a walk, or read a book? Wouldn’t the feelings of selfishness overwhelm you? How could you enjoy reading a book knowing that thousands of people are dying every time you turn a page? I think there’s a lot to dig into there for more powerful characters. Sure maybe they can do -anything- but they can’t do -everything-.

Alternatively, let the MC not this lawful-good aligned Superman character. Let them be a selfish omnihero who stops caring about everything because it is such a bother. I can see problems would naturally rise up in such scenario; even let the players spiral down the path of evilness and rule the world with total iron fist if they wish so.

Naturally, if you would prefer a power-balance-check kind of conflict rather than philosophical “I conquered all things to be. Now what?” kind of conflict, it is easier to introduce a third party. And there is no stronger third party than nature itself.

Personally, it depends on what kind of story you’re going for.

Power fantasy can, in the right hands, be an exceptionally powerful tool if you want to take a nobody and suddenly give them effectively limitless power; what will they do? Many people say they have good intentions but human nature befalls us all and absolute power corrupts absolutely.

One of the most common answers is to create a utopia with fair and equal treatment. But there’s a problem with that… one man’s utopia is another man’s hell; one of the major problems of course with peaceful coexistence between radically different people and cultures.

I’d add a corruption mechanic and lock certain late-game choices behind it. If your corruption is too high you’re not going to create a peaceful, egalitarian society because you’re too busy dominating or subverting existing systems.

Another way to use power fantasy as a powerful tool is to have the MC start to slowly slide down the power scale as they progress. Someone who once had unlimited power is going to falter and failure, potentially, makes more of a story than unlimited success. Does the MC despair over lost power and try constantly to regain it? Or do they accept their new limitations and start anew?

And on that note, what happens if their powers return? Who do they become?

To me, all these details matter and considerably so. We live in a world with consequences and pitfalls. In my humble opinion as but a man, fiction should be no different. Everything is made, in literature, to tell a story and to make readers reflect on what they read as it applies to reality.

How about a character that have split personnality? If he use his evil related power to much his evil self would take over. He would be his own antagonist then XD

I don’t see the problem in having an OP MC, provided it is done correctly. The thing about power is that, when you have more than everyone else, it’s really easy to think you know best (the whole “might makes right” thing). It’s also really easy to become detached from everyone else because you can no longer relate to them. It’s kind of like immortals–immortal beings view the world differently than mortals, and without certain things keeping them grounded and tied to the world (love, enjoyment of life, and other more personal type things), they simply grow apart and place themselves above it all.

A way to view this is like a human looking at a fly–flies live, on average, for a month. Most people don’t think twice about killing flies because they are a nuisance and dirty and whatever (I say this but I’ve always had a weird thing with flies, and it’s one of the two or three insects I’m not afraid of!). For an immortal, a mortal’s life can be like that of a fly–too short to worry about. That sort of detachment is a problem. That sort of view of other life is a problem.

I think the thing to remember is that power isn’t the be-all, end-all of existence. There’s a reason for the saying ‘power corrupts; absolute power corrupts absolutely.’ It doesn’t mean that everyone with power will turn evil, it means that the possession of power, especially at higher levels, presents a temptation to view anyone without it as inconsequential or worse. When you’re talking about someone who is supposed to be a hero, that’s a problem. It’s their connections to others that can give them that link to the world as a whole, even if it’s a link they will never feel directly themselves.

If you want to see how OP is done well, look no further than One Punch Man. The man is making a shopping list in his head, worried about sales, and being all too relatable while he’s kicking the crap out of a bad guy. He likes playing video games. He is a bit of a dork. And he didn’t get credit for his powers while his sidekick got promoted above him. It’s an interesting story, with a likeable and relatable “hero” who has more power than any of us could ever dream of having.

So yeah, it can be done. You just have to give the MC enough weaknesses or enough emotion to do it and give them room to grow.