Sorcery Is for Saps — Steal the sorcerer’s identity and take his place! 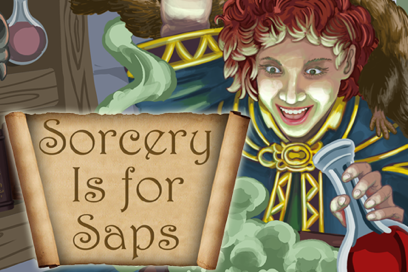 We’re proud to announce that Sorcery Is for Saps, the latest in our popular “Choice of Games” line of multiple-choice interactive-fiction games, is now available for Steam, iOS, and Android. It’s 25% off until October 21st!

As an apprentice sorcerer, you should never steal your master’s identity. But what if that’s the only way to save the kingdom?

Sorcery Is for Saps is a 200,000-word interactive fantasy novel by Hilari Bell and Anna-Maria Crum, where your choices control the story. It’s entirely text-based—without graphics or sound effects—and fueled by the vast, unstoppable power of your imagination.

Will your powers save the cursed king–or will you turn traitor and seize the throne yourself? You can probably break a simple kindness curse, but there are dark forces at work and you may be in over your head before you can say “Abracadabra.”

Throw in your lot with scheming councilors, the attractive heir, or even go to work for the invaders. But whether you choose to save the king or your own neck, one thing is clear—this is your big chance!

‪Magic, power, or true love—which will you choose? In Sorcery Is for Saps, you’ll find it’s easier than waving a wand.

We hope you enjoy playing Sorcery Is for Saps. We encourage you to tell your friends about it, and recommend the game on StumbleUpon, Facebook, Twitter, and other sites. Don’t forget: our initial download rate determines our ranking on the App Store. The more times you download in the first week, the better our games will rank.

Game is pretty good but I’m not a fan of authors deciding that we have a crush on a certain character and keep refering as if we like them even after saying we have no desire to. Especialy the character in question being 50% of the stuff I hate.

Otherwise it is fun. This is the only thing that really bothered me.

Highly recommend if you like magic, snarky side animals and investing.

This made my day… Cannot wait.

I can’t find it anywhere in the Amazon store. I’ve tried all the different links on the COG site, and just searching for it myself on the app store. Am I missing something?

was a good story, just wish my character had an option to walk into the river with rocks in her pockets marked with runes for extra weight after the princess rejected her…so heartbroken

Huh. I didn’t have that problem with the prince…

Achievements seem to be broken, at least on iOS, so I’m waiting for an update before I play again. I didn’t get any achievements after finishing the story, and I know there’s one I should have gotten.

Can you say more about that under spoiler?

The writing is solid and good (good continuity and no typos spotted so far). However it didn’t draw me in. It felt like more of the same to me. The RI’s were rather plain, I’ve seen more interesting stereotypes in other games. The magic felt a bit boring for I was unable to choose which spell I wanted to use, it was already written into the story. In short, the game is good but it didn’t stand out much. I did like the famliar but I would’ve liked the option to pick my own rather than sharing the one from my tutor.

Huh, the familiar always betrays me.

That was a lot of fun. Really got swept up at the end and pleased it all worked out. There were a couple of typos: Lily got misgendered once near the end and Fergi got called Terror or Rodents a few times.

@Zoilus were you nice to her? I had to grit my teeth and be humble a couple of times.

Not, ah, as much as I should’ve been. I thought it was a friendly rivalry, but I still managed to win (that is, become the unloved and decidedly mediocre Court Mage).

Pretty good, but I have to say that the romance (at least the one I went with, the princess route) is rather lackluster. Way too few scenes dedicated to it. In general, I would have appreciated some (or much) more time spent getting to know the characters, rather than staying so focused on the (admittedly decent) plot. Character relationships, perhaps with the exception of the familiar, felt hollow.

Still, an enjoyable read, worth its price. The investigation was fun.

Edit: To be fair, the above mentioned problems apply to most of the games here, both the official releases and the hosted games. The only two I’ve played so far which actually have somewhat satisfying romances and character relationships are Psy High and Fatehaven.

@dfabulich Like I said, I didn’t unlock any achievements, even after beating the game. Without knowing what all the specific achievements are for, the only one I know I should have gotten is Mechanical Genius, for inventing the Lazyboy at the end.

@Zoilus Huh. I didn’t have that happen in my playthrough. Then again, I was pretty nice…

On the whole I liked it but the one point I really disliked (which was unfortunately at the end) was being made to choose a life decision based on who I had a bigger “crush” on despite never showing any interest in either of the available options (Neither appealed to me that way at all).

I kind of thought it was a bit weird that you should have to base your decision on something like that rather than going I’m the hero here, I’m going to do what I want rather than have to be fawning over a guy I don’t even particularly like. Options to go back to your training, travel etc don’t appear until you get turned down which seemed like a bit of a pointless aside and very immersion breaking. If you’ve shown no interest at all, why not skip straight the the final options or have the opportunity to not go after one of the men from the outset.

There were also a few other areas where they put words into my mouth, usually to the effect that I thought the prince was dreamy or felt like swooning in his presence despite what I might have actually thought about it. It’s a shame since otherwise I thought it was solidly written enjoyed it. It’s just the ending that put me off.

was a good story, just wish my character had an option to walk into the river with rocks in her pockets marked with runes for extra weight after the princess rejected her…so heartbroken

Haha same, I was gunning for Court Sorcerer when I got the brush off. Awkward…

I started to “play online.” However, on finishing the free preview, when I click “buy it now for $2.99” it redirects me to buy it on Steam. Is it not possible to purchase it through the normal online store like other games, or is something not working right here? I just wanted to read it in my web browser.

Sorcery Is for Saps

Steal the sorcerer's identity and take his place!

CoG prefers you to buy it from Steam, due to wanting to be able to launch more CoG/Hosted games there.

But I like “owning” my game and love playing it in my browser too.

While I too prefer to have my games on the web browser, for portability purposes, the “ownership” offered by Google is no more certain than the one offered by Valve.

Then buy from this site directly, is all I can say